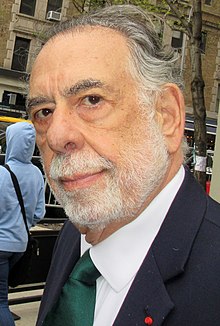 Francis Ford Coppola (born April 7, 1939 in Detroit , Michigan ) is an American director , screenwriter and film producer . As the director of classics such as The Godfather and Apocalypse Now, he is one of the most important filmmakers in American cinema.

Because he was critical of the established Hollywood studio business, Coppola founded the independent film studio American Zoetrope in 1969 , where, among other things, the first films by George Lucas were made. After getting into financial difficulties with the studio, from the mid-1980s onwards, Coppola also directed commercially oriented films with less artistic demands.

He was born in Detroit in 1939 as the son of the musician and composer Carmine Coppola and the Italian actress Italia Pennino . He has two siblings, older brother August Floyd Coppola, father of actor Nicolas Cage , who was born in 1964 , and younger sister Talia Shire . His second name Ford was from an earlier work of his father as an arranger for the Ford Sunday Evening Hour of CBS Radio . Immediately after Coppola's birth, the family moved to New York City .

At the age of ten, Coppola fell ill with polio during a Scout excursion , which resulted in paralysis of the left side of his body. Spending the next nine months in bed, Coppola watched more television and performed puppet plays for the entertainment of others. Coppola accepted the fact that he would never be able to walk again, but his father found him a physiotherapist , with whose help Coppola's condition gradually improved so that he was able to go to school again. After he had recovered almost completely, his parents gave him an 8-millimeter film camera with which he made his first film recordings.

He enrolled in the New York Military Academy, expecting his father to learn to play tuba there. At school he always performed well, he was cheeky but helpful to his comrades. After 18 months in high school , he dropped out and retired in Manhattan . After returning to high school, he played the tuba again and wrote his first own pieces.

After graduating, Coppola received a scholarship place at Hofstra University , where his brother had previously studied. There Coppola attended various theater seminars and staged his first stage appearances. A film that inspired him at the time was Sergei Mikhailovich Eisenstein's Ten Days that Shook the World (1927).

After graduating, Coppola decided in 1959 to continue studying at the University of California, Los Angeles film school . During his studies, Coppola met the independent filmmaker Roger Corman and became his assistant. He helped Corman with the production of several films, including for example The Terror - Schloß des Schreckens , took on the tasks of a screenwriter , production assistant, sound engineer and director and thus acquired practical experience in the film sector. During his student days he was also involved in the production of several small horror and erotic films. Coppola made his directorial debut in 1961 with the western That only exists in the Wild West , after which he made the horror film Dementia 13 in 1963 . The script for this black and white film, which is about a serial killer , was written by Coppola himself. Dementia 13 was shot in Ireland on a budget of around US $ 20,000 . In 1968 he finished his studies in Los Angeles with the best grade of his year.

Establishment as a filmmaker

Francis Ford Coppola took up a position on the Warner Bros. Seven Arts script team and was commissioned to film the 1947 Broadway hit Finian's Rainbow . In June 1968, Coppola began filming The Golden Rainbow, where he met George Lucas , who was on the Samuel Warner Memorial Fellowship. Coppola took on Lucas as an assistant for the filming of The Golden Rainbow . Lucas walked around the set with an instant camera and took pictures of possible camera settings. The film flopped at the box office and the fact that a white man is punished by turning black earned him the additional charge of racism .

By the time filming was finished, Coppola and Lucas had become good friends. The director told Lucas that he was planning to make a road movie based on his own short story called Echoes . Never Love a Stranger tells the story of a pregnant woman who leaves her husband one night and goes on an aimless journey with a hitchhiker . Coppola wanted to shoot the film together with Lucas during an odyssey from New York to Nebraska, as independently as possible from Hollywood's film studios. Since Lucas wanted to start his own project with THX 1138 at that time , Coppola made Lucas an offer. He promised to make an arrangement with Warner Bros.-Seven Arts so that the studio would pay Lucas to write a screenplay for THX 1138 . Lucas was never able to accompany him as an assistant to a stranger and work on THX 1138 during the trip .

Coppola, who had wanted to turn away from Hollywood's film industry for a long time , suggested that Lucas set up an independent studio. After a meeting with the filmmaker John Korty, who reported on his third production in his own studio, Lucas and Coppola decided to visit the Korty Films studio. Coppola also looked at other independent studios. So he visited a small company called Lanterna Films in Denmark and was given a zoetrope as a souvenir of his visit. Soon afterwards, together with Lucas, he ordered high-quality film equipment and took care of premises that he had found in San Francisco in 1969. He named his studio American Zoetrope .

Then he "made an offer he could not refuse" (CBS News): the Mafia epic The Godfather ( The Godfather ) from 1972, from the novel by Mario Puzo . This became his breakthrough as a director. The sequel, published two years later, was also very successful with critics and audiences. Coppola's last great success was the Vietnam epic Apocalypse Now in 1979 , in which Marlon Brando and Robert Duvall from The Godfather also played. It was only after shooting from 1976 to 1979 that Coppola was finally able to finish the anti-war film. During the production time there were differences with the film distributor United Artists . Even so, the work became a financial and artistic success. Apocalypse Now is still one of the most influential films of the past fifty years.

After the terrific flop, Eine mit Herz (1982), Coppola tended to shoot ambitious works with which he could pay off his debts. In 1983, based on novels by SE Hinton came -of-age films The Outsider and Rumble Fish . The actors employed by Coppola became the young stars of their generation as brat packs . The Outsider was a commercial success despite mixed reviews, while Rumble Fish, filmed in black and white, flopped at the box office. His dream film Cotton Club was another failure in 1984, and Coppola then made Peggy Sue's Married . To this day, he has not been able to break this vicious circle of artistically ambitious flops and technically solid commissioned work. In 1990, contrary to previous assurances, he was forced to shoot The Godfather - Part III ; the criticism reacted cautiously. The same applies to the children's film Jack with Robin Williams and the John Grisham film Der Regenmacher . A planned project that had been close to his heart for a long time, Megalopolis , did not materialize. In 2007 he released the much more personal film Youth Without Youth , about old age, death, fear, love, language, early history, dreams, reincarnation and nuclear weapons. The completely digitally shot film made it onto the front page of the renowned Cahiers . The criticism in the United States reacted very negatively.

Coppola has produced numerous films by other directors, including George Lucas ' American Graffiti (1973), Akira Kurosawa's Kagemusha (1980), Godfrey Reggio's Koyaanisqatsi (1983), Paul Schrader's Mishima - A Life in Four Chapters (1985) and Tim Burton's Sleepy Hollow (1999 ). He wrote the screenplay for Jack Clayton's award-winning film The Great Gatsby (1974). With this, Coppola succeeded in a true-to-work and yet Hollywood-fair adaptation of Fitzgerald's novel, on which Truman Capote, among others, had failed.

Francis Ford Coppola has been married to documentary filmmaker Eleanor Coppola , whom he met on the set of Dementia 13 , since 1963 . He is the uncle of the American actors Nicolas Cage and Jason Schwartzman , father of the directors Sofia Coppola ( Lost in Translation ) and Roman Coppola ( music videos and films) and the brother of the actress Talia Shire . His eldest son, Gian-Carlo , was killed in a boat accident in 1986.

(each in the "Best Film" category)

Coppola is one of only four directors who managed to make two films that were awarded the Oscar for Best Picture ( The Godfather and The Godfather 2 ). The other directors are Clint Eastwood , Frank Capra and Miloš Forman .