Hitchhiking is a redirect to this article. For the television film from 1974 see Polizeiruf 110: Per Anhalter . 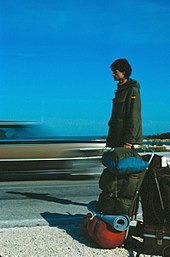 Hitchhiking , sometimes hitchhiking or hitchhike (English hitchhiking ), is the free usually Mitreise in a foreign car . The ride itself is called u. a. as a lift (British English) or ride (American English).

The English equivalent of German hitchhiking is the verb to hitchhike . A tramp means a migrant worker in English . 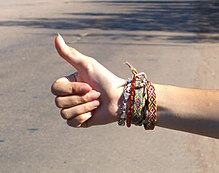 Internationally known gesture to be taken away

The hitchhiker usually signals his wish to ride on the side of the road with an upward thumb . Signs with the desired travel destination are often held against passing motor vehicles. However, the drivers can also convey certain information to the hitchhiker; If the hitchhiker is still in town and the driver points to his steering wheel several times, this means that he is not driving out of the town. Another option for taking along is to speak to the driver of the motor vehicle directly when the opportunity arises; this can be done, for example, at gas stations or at motorway service stations. In the Netherlands there are special places for hitchhikers identified by signs, the lifter stops , which are provided with a holding bay and thus enable problem-free stopping .

Charity hitchhiking in England in November 2010

As hitchhiking only generates a small amount of additional emissions, this form of travel is very environmentally friendly. Hitchhiking makes better use of existing capacities. If all the seats in all the cars were filled, the number of cars on the streets would be significantly lower. The vehicles that are used are usually driving anyway. This means that the additional weight of the hitchhiker and its luggage creates only a few other pollutants and greenhouse gases .

There are only a few studies that have tested the safety of hitchhiking. A 1974 California Highway Patrol investigation found no greater risk of hitchhikers being victims of a crime. A study by the Federal Criminal Police Office in Wiesbaden found in 1989 that the actual risk when hitchhiking was lower than generally assumed. The authors of the study therefore did not generally advise against hitchhiking. According to a study on “short hitchhiking”, it is true that in some cases suggestive remarks and “stupid sayings” are made towards women, but they are also exposed to these in everyday life. Violent acts are very rare. However, since that time there have been multiple criminal and murder cases that have been widely received in the media, to which hitchhikers fell victim, that the police generally consider hitchhiking to be not recommended.

Conversely, motorists who take hitchhikers with them also run a risk. Criminals also hitchhike and take advantage of the opportunity to commit robbery or another crime. In contrast to the vehicle, they do not have a license plate and are therefore more difficult to identify.

In Germany, hitchhiking was already popular in the 1920s among the youth of the Bund as a cheap way to travel . The term hitchhiking was also known back then. Werner Helwig , a member of the Nerother Wandervogel , wrote and composed the much-sung song Hitchhiking through Land in 1929 . In addition, in 1930 Helwig published a poem in the Berlin magazine Der Cross- Section under the title Automoral or Die Geistesverhärtung , which represents a kind of typology of appropriate hitchhiking behavior according to car brands. An example:

“In the Ford, it is advisable to show a sporty face ,
the racing machine shapes the trains by itself,
in a bad car it is good to grin,
mischievous, as if caught on a forbidden path,
very noble cars are befitting melancholy,
relaxed fatigue, restrained interest. "

In the USA in the middle of the 20th century illegal jumping on freight trains to cover long distances was referred to as hitchhiking, as described in the novel On the Road published by Jack Kerouac in 1957 and became a cult book .

Hitchhiking by train in the USA 1940

In the 1960s and 1970s, hitchhiking was particularly widespread in many countries as an inexpensive way of traveling , especially among young people of the hippie generation. The certain adventure of this form of travel often contributed to its attractiveness.

The number of hitchhikers on the motorways and trunk roads seems to have fallen sharply since then (but especially since the second half of the 1990s), although hitchhiking is still often used to cover short distances, such as from a village to the nearest town .

The decline of hitchhikers in Germany is at a higher proliferation of cars in adolescents, the introduction of weekend ticket , call taxis , online car-sharing , Bus Lines and low-cost airlines but also the stronger urge for security due. This includes both physical integrity and the certainty of arriving on time. In part, this can also be attributed to the new insurance models emerging in the early 1990s, in which the possible vehicle occupants must be determined in advance. Nevertheless, hitchhiking still works pretty well in Germany because many drivers who hitchhike know about hitchhiking from their youth. Hitchhiking was especially widespread in the GDR and was also viewed as a normal form of travel by NVA soldiers .

The hitchhiking movement of the 1970s and 1980s was primarily widespread in the GDR in the blues or customer scene in order to escape the confines of everyday life. Here and in other Eastern Bloc countries, the hitchhikers oriented themselves to the ideals of freedom of the hippie movement and were accordingly classified as oppositional by the governments and state security services of these countries, as they did not correspond to the prescribed culture and were often politically active.

Carpenters on the roll: Continuation of the long tramping tradition in Erfurt in 1990

In other countries, such as B. in Ireland or the Czech Republic , hitchhiking is still a common form of travel today. Sometimes (but not in the countries where hitchhiking is most common, such as Ireland or the Czech Republic), it is also common to contribute to the travel costs. In Romania , hitchhikers give the driver a little money as a gesture of friendliness, which nowadays is no longer in proportion to the transport prices of train or bus. In Central Asia it is even the rule that drivers earn something by taking passengers with them. Hitchhiking is a legal requirement in Cuba. This means that local drivers are obliged to take hitchhikers with them, as the automobiles do not belong to individuals but to society.

The German Autostop Society Abgefahren e. V. aroused lively media interest in August 2007. The association wants to free hitchhiking from the hippie stench with the help of the Internet and make it more popular again. He supports various projects related to hitchhiking and organizes regular hitchhiking meetings in Germany, as well as an annual German hitchhiking championship since 2008.

The robot Hitchbot hitchhiked u. a. 2014 through Canada. Since he could not move independently, he had to rely on the cooperation of drivers in order to achieve his goals.

In Europe today there are a large number of groups that deal with the promotion of hitchhiking and also the organization of races, trips and meetings. Tips and tricks for hitchhiking or for special places suitable for getting on and off are collected on websites, some in wiki form.

A reality TV program series called Peking Express was broadcast in several European countries , in which the participants accompanied by the camera were supposed to hitchhike from Europe to Asia as quickly as possible and had to do without local language skills and dictionaries. They also had to organize accommodation and food free of charge.

The name of the science fiction novel The Hitchhiker's Guide to the Galaxy alludes to hitchhiking in space. In it, the main characters Arthur and his friend Ford get to an alien spaceship after the destruction of the earth by stretching out Ford's thumb and from there they experience several adventures in space and try to save the future of mankind.