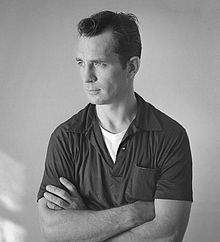 Jack Kerouac , actually Jean-Louis Lebris de Kérouac (born March 12, 1922 in Lowell , Massachusetts , † October 21, 1969 in Saint Petersburg , Florida ), was an American writer of Franco-Canadian origin and one of the most important representatives of the Beat Generation .

Jack Kerouac came from a French-Canadian family of Roman Catholic faith. The French dialect Joual was spoken in the family and as a child he did not learn the English language until he started school. The early death of the older brother Gérard (1916-1926) was a tragic event for the four-year-old Jack, which he tried to process in Visions of Gerard . The father Leo Kerouac died on May 16, 1946.

Kerouac's sporting success brought him from 1940 to 1941 a scholarship to Columbia University in New York , where he formed the cell of the Beat Generation along with fellow students such as Allen Ginsberg and William S. Burroughs . The Beatniks are considered to be the first representatives of the pop literature genre .

Due to a broken leg Kerouac left the university and joined the United States Merchant Marine , the US Merchant Marine in. The Navy had turned Kerouac away. In 1943 he was finally able to switch to the United States Navy , but the following year he was classified as paranoid-schizophrenic and discharged based on this diagnosis. References to his time at sea can be found in The Sea is my Brother .

Between his voyages at sea, Kerouac stayed with his college friends in New York. He met with Allen Ginsberg, Neal Cassady , Lucien Carr and William S. Burroughs, who influenced him and helped shape his autobiographical work.

It was Kerouac's wildest years - with wine, drugs, sexual adventures, and traveling the US , Mexico , North Africa, and Europe . These trips laid the foundation for his novels, which are written in a style characterized by drugs and rhythmic slang. He was also enthusiastic about the music of bebop and Zen Buddhism; in an obituary, Kerouac referred to jazz musician Charlie Parker as " Buddha ".

In 1944 he married Edie Parker. This first of his three marriages only lasted two months. From 1946 to 1948 he wrote the novel The Town and the City , which appeared in 1950. This first published novel received good reviews but little fame for its author.

Between 1947 and 1950 Kerouac traveled all over the country with Neal Cassady, often referred to as “crazy”. For Kerouac, Cassady was the embodiment of a romantic ideal of America: restless, adventurous, sexually overactive - a cowboy who traded his horse for a car. Kerouac was usually not behind the wheel himself, he always preferred to be a passenger and an observer.

Back of the memorial stone

Kerouac initially found no language for what he had experienced, the wild parties, the restlessness and artistic visions of his friends, the life of odd jobs and art. It was only the fresh and ecstatic style in which Cassady wrote him letters that Kerouac appeared to be the right approach to the attitude to life and so the novel On the Road (German: Unterwegs ) was written in 1951 , which was only published in 1957. He typed the manuscript on a roll of teletype paper in just three weeks. So he no longer had to worry about changing paper while writing was in progress. In a letter to Neal Cassady, Kerouac also associated the long paper web with the eponymous highway. The role was bought on May 22, 2001 by the owner of the NFL team Indianapolis Colts , multimillionaire Jim Irsay, at Christie's for 2,426,000 dollars - more than Kerouac earned with his books. The role is occasionally exhibited in public.

On The Road was Kerouac's breakthrough and the highlight of his career. This made him the central figure of the Beat Generation and also interesting for publishers. For a while Kerouac made a living from writing, if not on a large scale. Kerouac's writing style is characterized by hectic and breathless phrasing. There are sentences that go over seven or eight lines, sometimes they take up a whole page. Some of them are reminded of improvisations in jazz music. So it seems no coincidence that Kerouac writes a lot about jazz music and jazz musicians in his works.

Kerouac's decline began with his fame: Ignored by criticism, panned and laughed at, pursued by fans who wanted to drink and drive around with him all the time, his friends Ginsberg and Burroughs somewhere on the road, he increasingly sank into alcohol and took refuge in it more and more often His mother's house. The role of "King of the Beats", which was forced upon him, repelled him more and more because his idea of ​​literature and an unadulterated, spontaneous spelling ("spontaneous prose") was not understood. The media saw only young men and women who led marauding lives, used drugs, and indulged in strange ideas about America's freedom. The caricature of the Beats, the bongo-playing hangover and stoner in a striped shirt with a goatee, was soon to be seen in films and television series. You could book “beatniks” for parties and the like. The commercialization of this literary youth movement became rampant. Kerouac grew bitter. In addition to all of this, literary criticism continued to pay little attention to him or dismissed his books as “writings” ( Truman Capote ). Kerouac continued to suffer from financial difficulties and moved with his mother several times from Florida to the west coast and back again. He drank regularly and visibly deteriorated physically.

In 1966 he married a third time, the sister of a childhood friend, Stella Sampas. With her and his mother he moved first to his hometown of Lowell and then to Saint Petersburg , Florida, where he died on October 21, 1969, devastated by alcohol and other drugs. Bob Dylan attended Kerouac's funeral , the grave is in Edson Cemetery in Lowell. Kerouac's tomb appears in the music video for Bob Dylan's 1989 song Series of Dreams .

Kerouac finished a first serious novel in 1943, The Sea is my Brother (published in 2010). He wrote The Town and the City (1950), his first published book , from 1946 to 1948 . He then started Doctor Sax , but initially gave up on the work on On the Road , which he began in the fall of 1948. In March 1949 a second version was created, later another and the first by Pic . He wrote the famous roll manuscript of his most famous novel in April 1951 within three weeks, shortly afterwards the book version, which would not appear until 1957. The Visions of Cody , created with On the Road 1951–52, were not published until 1973. Kerouac finished Doctor Sax (1959), which had been interrupted several times, in 1952 when he lived with Burroughs in Mexico City. He began October in the Railroad Earth in California with the Cassadys. His teenage romance Springtime Mary originated in New York in early 1953; published as Maggie Cassidy (1959). Kerouac wrote The Subterraneans (1958) in October 1953, supposedly in just three nights. 1953–54 was also written in New York Some of the Dharma . In 1954 the Cassadys wrote the poem San Francisco Blues . In the summer of 1955 the collection of poems Mexico City Blues (1959) in Mexico. There he also began Tristessa (1960), which he finished in 1956. His Buddha book Wake Up (2008) was also written in 1955. Visions of Gerard (1963) he wrote in 1956 with his sister in North Carolina, The Scripture of Golden Eternity and Old Angel Midnight were written in 1956 when he and Gary Snyder were in Marin County located. He spent the summer in the wilderness in Washington State. In September he was in California and Mexico and finished Tristessa . He wrote Book One of Desolation Angels . Book Two , Passing Through , was written in Mexico in July 1961. Desolation Angels was published in 1965. Kerouac was in Tangier in September 1957, typing Burroughs manuscripts for Naked Lunch . The Dharma Bums (1958) was written in Orlando, Florida in November 1957 . Kerouac bought a house in Long Island in 1958 and began Lonesome Traveler (1960), Big Sur (published 1962) refers to a ruinous stay in Ferlinghetti cabin near Big Sur in July 1960. The book was written in October 1961 in Orlando. Satori in Paris (1966) was written in Paris in July 1965 and first published in the Evergreen Review . Pic (1971) was essentially written as early as 1950 and finished in Florida in 1965. An Vanity of Duluoz: An Adventurous Education (1968) he wrote from March to May 1967 in Lowell, Massachusetts.

In literary history, Jack Kerouac pioneered a new generation of authors and journalists. Her New Journalism takes up the volatility, subjectivity and spontaneous emotionality of Kerouac, pushes them on or guides them in a regular way. Examples of this are Hunter S. Thompson with his gonzo reports in the USA, Jörg Fauser in Germany and Marie Luise Kaltenegger in Austria. In this way Kerouac was a innovator of literary expression who - like John Dos Passos - gave fresh blood to the literary style more than once.

The extent to which his work stimulated and enlivened others can be seen in the large number of artists of different styles and art forms who explicitly refer to Kerouac's novels and his reputation:

In 1974, Allen Ginsberg and Anne Waldman founded the Jack Kerouac School of Disembodied Poetics , which teaches and practices creative writing , as part of Naropa University, a private Buddhist school in Boulder .

Kerouac wrote a single play: Beat Generation , the writing of which was rediscovered in 2005 in a New Jersey attic. The German premiere took place in December 2007, based on a translation by Andreas Marber, at the Schauspiel Köln . The third act of Beat Generation was filmed in 1959 by Robert Frank and Alfred Leslie in the multi-award-winning short film Pull My Daisy .