Inuk is a redirect to this article. For the film see Inuk (film) .

The Inuit (singular: Inuk ) is the name given to the indigenous peoples who live in Central and Northeastern Arctic Canada as well as on Greenland . The term Eskimo is used as a generic term that also includes the related arctic peoples of the Iñupiat (in northern Alaska) and Yupik (on both sides of the Bering Strait ) (but not the more distantly related Aleutians ). Inuit is therefore not a substitute for the term Eskimo and is not included in the vocabulary of all ethnic groups living around the North Pole.

Inuit or Inuit-Inupiaq is also called the eastern language group of the Eskimo languages, which extends from Northwest Alaska to Greenland and which is divided into five dialect groups.

Inuit is Inuktitut and means "people"; the singular is Inuk ("human"), two people (dual) are Inuuk . The term Eskimo is a collective term originally used by the Ayisiniwok and Algonquin for the peoples in the northern polar region that are not related to them. According to Ives Goddard (* 1941), a linguist at the Smithsonian Institution , the word is etymologically derived from the Ayisiniwok word aayaskimeew = ' snowshoe netters ' .

Since the term Eskimo is not a name in itself, but an external name, it is sometimes perceived as derogatory. There are therefore efforts to generally replace it with Inuit ; the use of the term Eskimo is declining, but Inuit is not synonymous and therefore not a synonym. This is why Inuit has not yet established itself as an alternative word in northwestern Canada, Alaska and on the Chukchi Peninsula : the ethnic groups living there do not have the word in their vocabulary; They also refer to themselves as 'human (s)', but depending on the language group with the words Inupiat , Sugpiaq and Yupik . The Inupiat, for example, do not consider the term Eskimo to be derogatory. With the Inuit living in the north and north-east of Canada, however, the views on this question are different: While some classify the term Eskimo as politically incorrect and want to see themselves referred to exclusively as 'man (s)' ( Inuk / Inuit ) The Inuit-owned cooperative of Cape Dorset in the Nunavut Territory , known internationally for the distribution of Inuit art, has remained unchanged since its foundation West Baffin Eskimo Cooperative (WBEC).

Origin of the Inuit

Today it is certain that Paleo-Eskimos were around 3000 BC. (Long after the last Ice Age, which ended around 10,000 BC ) immigrated from Asia via the Bering Strait to Alaska (North America). The unanimous archaeological opinion is that they arrived on the American continent at least 12,000 years later than the first Paleo-Indian groups .

Around 2500 BC In BC (the Arctic climate was warmer than it is today) some of the Paleo-Eskimos migrated from Alaska to Greenland. During this time the pre-Dorset culture developed (with the Independence cultures I and II as well as the Saqqaq culture ). Later - around 500 BC. Chr. To 1000 AD - followed by the Dorset culture (named after today's South Baffin settlement Cape Dorset, in the vicinity of which archaeological finds were discovered).

At the same time, in 2000 BC Until 1000 AD in Alaska, warmer due to the Pacific influence, the Neo-Eskimo culture .

Around 1000 AD, in a warmer climate than today, there was another migration from Alaska Eskimos via northern Canada to Greenland. These were carriers of the Neo-Eskimo culture, which was further developed and clearly superior to the Dorset Eskimos in many areas. In a relatively short time, the Dorset culture was ousted, and in some cases they probably mixed. The newly created culture is referred to as the Thule culture based on finds near the northern Greenland settlement of Thule . The period of the Thule culture spans around 800 years (1000 to around 1800, i.e. until the end of the Little Ice Age , which lasted from around 1550 to 1850 ). The Thule Eskimos are the direct ancestors of today's Inuit. There are flowing transitions over time: the period from 1500 to 1900 is seen as Inuit early history ; as Historical period of the Inuit refers to the time since 1800's.

The Inuit culture is - in remote settlements partly to this day - a relatively uniform hunting culture , which until the middle of the 20th century mainly focused on hunting marine mammals ( seals , walruses , whales ), but also land animals ( caribou , polar bears ). based. The most important hunting weapon was the harpoon , but the Inuit and their relatives also used bows and arrows. In addition to hunting, they also caught fish and gathered fruit. A nomadic way of life, which was based on the pursuit of hunted animals in times of low wildlife, was only enjoyed by the caribou Inuit who lived in the interior of the former Keewatin district . The Inuit of the coastal regions were semi-settled .

The social structure of the traditional Inuit society was largely egalitarian , which means that in principle every person had the same access to resources and there were only very small differences in rank . If there were more serious disputes, these were often punished by public ridicule (within the framework of a certain etiquette ). In addition, there were public fistfights or singing duels (which were also perceived as social events), while the death penalty or even the division of the group was only ordered by the community in extreme cases. However, there were definitely differences in the social structures, as studies by Erich Fromm on the destructiveness of different ethnic groups show (→: "Non-destructive-aggressive society" in East Greenlanders and "Life-affirming society" in North Greenlanders ) .

To get around on the water, they used the kayak or the umiak (women's boat) with many seats ; in the countryside and the sea ice they served in the winter of sled dogs pulled Qamutik (slide) as a transport. In summer the dogs were used as carrying animals.

Most Inuit lived as family groups in camps - during the winter in the Qarmaq (plural: Qarmait), a dwelling that, depending on the region and available material, was built from stone, grass and sod , low scrub, occasional driftwood and whale bones and sealed with snow were. Snow houses ( igloos ) did not usually serve as permanent winter accommodation, but were created when traveling. In summer, people lived in the more breathable tent, which was made of fur with whale bone sticks. Incidentally, elements of polar culture were u. a. the longhouse and the serpentine oil lamp ( Qulliq ) powered by oil from the bacon of marine mammals .

Shamanistic healer in Alaska (around 1900)

The original religion was decidedly animistic , that is, all animals, plants, inanimate things and even concepts were considered to be endowed with a human-like soul. The whole world was considered to be populated with different spirit beings , over which there were some god-like figures. The shaman played an important role as mediator between the worlds . The Inuit beliefs largely coincide with the religions of other Eskimo peoples .

Much has been written about the meeting of the Inuit culture with the white culture in connection with the increasing emancipation of the Inuit, and this is by no means always free of ideology. Often, historical connections are also presented in abbreviated form, for example to highlight a single fact, which inevitably affects the overall picture. 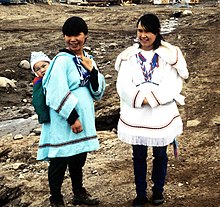 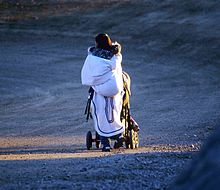 The Inuit culture has been subject to major upheavals since the Second World War : nomadic life has been over since the late 1960s, and the Inuit now live in prefabricated settlement houses in southern Canada. 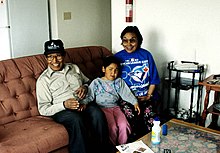 Sled dogs (unlike in northern Greenland today more of a luxury in Nunavut) have been replaced by snowmobiles , kayaks and umiak by factory-made canoes with outboard motors, and summer trips are no longer made on foot, but by ATV (All-Terrain Vehicle, Quad ) . The hunting of bowhead whales place under international safeguards only sporadically after intense government, based on an agreement rules for maintaining tradition instead (Nunavut: five bowhead whales within ten years). The traditional trade in seal and fox skins as well as handicrafts made from walrus and narwhal ivory have practically come to a standstill as a result of boycotts by many states (for reasons of animal welfare). With the establishment of the Greenland kayak championships, traditional techniques for making and using kayaks - now for sporting purposes - have been maintained since 1986, as well as rope gymnastics for the Inuit .

In return, however, Inuit arts and crafts have become important sources of added value since the second half of the 1950s . Serpentine and marble sculptures, art graphics, wall hangings and carpets, jewelry, ceramics and dolls provide a large number of Inuit artists of all generations with hunting and fishing an essential livelihood.

The Inuit in north-eastern Canada hope for a positive development both economically and culturally from the formation of the Nunavut territory , which has existed since April 1, 1999 and is administered by the Inuit themselves; However, since it is a territory and not a province, the legal powers of the Nunavut government are limited and the dependence on the federal government is high. Special emphasis is placed on maintaining Inuit culture and tradition .

There are also transnational movements that are supposed to preserve the culture of the Inuit and to coordinate their political demands. B. the Inuit Circumpolar Council (ICC). Global warming is seen as a very significant problem, which will change the traditional life of the Inuit significantly, as it will change the flora and fauna. The government of the Nunavut Territory , especially Prime Minister Paul Okalik , is therefore showing an essential interest in how the Kyoto Protocol will develop and how it will achieve its goals.

The cultural upheaval is considered to be one of the main factors behind the diverse social problems among the Inuit peoples over the past few decades. This can be seen, among other things, from the fact that the areas where the majority of the Inuit still live today are among those with the highest suicide rates in the world. From 1985 to 2012 , Greenland had an average suicide rate of 83 per 100,000 inhabitants per year, in Nunavut it was 77.9 for the years 1986 to 1996. For comparison: Lithuania is the only independent country in the world where this rate was above 30 on average between 1978 and 2009. Furthermore, for example, depression , alcohol and nicotine abuse (even at a young age and during pregnancy) and its consequences, sexual abuse (especially of underage girls) and malnutrition (also of children) are widespread problems that still existed in 2019 .

From 2014 to 2019, Jacques Viens, a retired judge, conducted an investigation on behalf of the Provincial Government of Quebec. Representatives of the indigenous people criticize the report as being too superficial and not going to the roots.

In October 2015, the Canadian Inuit activist Sheila Watt-Cloutier received the Right Livelihood Award (“Alternative Nobel Prize”) “for her lifelong commitment to the rights of the Inuit and for the preservation of their livelihoods and culture, which are acutely threatened by climate change ”, together with the people of the Marshall Islands and their Foreign Minister Tony de Brum , the Italian surgeon and peace activist Gino Strada and the Ugandan human rights activist Kasha Jacqueline Nabagesera .

Individual groups of the Inuit