Inuktitut ("language of man") is the name of the Eastern Canadian dialect group of the Eskimo languages, which is mainly spoken in the Nunavut Territory , but also has speakers in Québec , Newfoundland and Labrador as well as the Northwest Territories .

The term Inuktitut stands on the one hand for the eastern Canadian dialects, on the other hand for all Canadian Eskimo dialects (including the western Canadian ), or for the entirety of the Eskimo languages, whose catchment area extends from Siberia via Alaska and Canada to Greenland .

In the Canadian territory of Nunavut , parliament passed the Inuit Language Protection Act on September 19, 2008 , which stipulates that citizens can regulate their affairs with authorities, in hospitals, etc. on Inuktitut.

Dialects of the Inuktitut 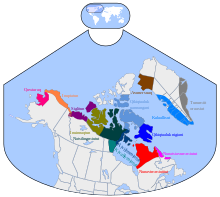 A comprehensive term is Inuktut .

Like other Eskimo-Aleut languages , the Inuit languages ​​have a very rich morphological system in which a series of different linked morphemes are attached to lexemes (see also incorporation and polysynthetic language structure ). All words in the Inuit languages ​​begin with a lexeme to which linked morphemes are appended. The languages ​​have hundreds of different affixes, in some dialects up to 700. Their theory of forms is very regular. Although the rules are sometimes very complicated, there are no exceptions as in German or other Indo-European languages .

This system can make the words very long. For example in the Inuktitut of central Nunavut , Canada:

This long word consists of a root tusaa- 'hear' and five attached elements ( affixes or other lexical morphemes ):

Word formations like this occur everywhere in Inuit languages. In a major work from Canada, the Nunavut Hansard , a collection of minutes of parliament, 92% of all words appear only once, very different from most English Hansards. Nor can one simply apply the idea of ​​parts of speech to Inuit languages, because fully inflected verbs can also be interpreted as nouns. The word ilisaijuq can be understood as a fully inflected verb: "he studies" or as a noun: "student". The meaning can only be determined in the context of the sentence. 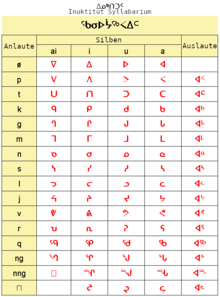 Inuit language theory and syntax vary slightly from dialect to dialect, but the basic principles apply to all of them and to a certain extent to Yupik as well .

In northeast Canada , especially in the Nunavut Territory and in Nunavik ( Northern Québec ), the Inuktitut is written with a syllabary which is a variant of the Canadian syllabary (see also Cree script ). The first syllabary print of Inuktitut dates from 1855/56.