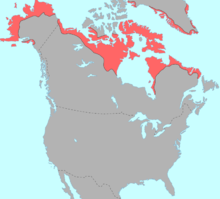 Spread of the Eskimo-Aleut languages

The term Inuit, which is often used today for all Eskimo peoples and Eskimo languages, is incorrect, as the Yupik peoples are not taken into account here. In addition, the term that used to be considered derogatory - it comes from the Algonquian languages  - is in reality neutral: it does not mean - as previously assumed - raw meat eater , but rather snowshoe knotter .

According to the current literature (e.g. Campbell 1997, Mithun 1999, Holst 2005) the six Eskimo languages ​​and Aleut can be classified as follows:

The representation in Ethnologue that the Inuit is divided into five separate languages ​​- two of which are then even combined into macro languages - is not shared in the specialist literature.

A special genetic proximity of the Siberian Chuktscho-Kamchadal languages and the Eskimo-Aleut languages ​​has been assumed by a number of researchers, but has never really been proven. This thesis was revived in the larger context of the Eurasian macro family by Joseph Greenberg.

According to Joseph Greenberg (2001), the Eskimo-Aleut languages ​​are a component of his hypothetical Eurasian macro family .

According to Greenberg's America Theory (1987), the Eskimo-Aleut languages, the Na-Dené languages, and all of the rest of the indigenous American languages ​​(collectively known as Amerind ) represent the three genetically independent indigenous language families of America, which are also separate waves of immigration from Northeast Siberia correspond. 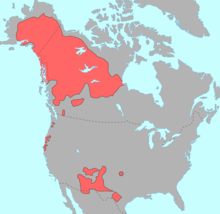 Dissemination of the Na Dené languages

According to more recent theories (e.g. Holst 2005), the Eskimo-Aleut languages ​​are genetically related to the Wakash languages . Holst justifies this with a list of 62 word equations and the derivation of some sound laws. This relationship crosses the line drawn by Joseph Greenberg between the Eskimo-Aleut and the Amerind languages ​​and, if it can be confirmed, would be a strong argument against Greenberg's fundamental division of the American languages ​​into the three groups Eskimo-Aleut, Na-Dene and Amerind. 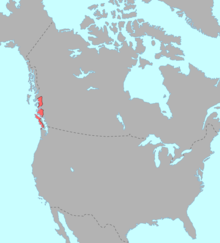 Spread of the Wakash languages

The Eskimo-Aleut languages ​​have an agglutinating morphology and are polysynthetic . Words and forms are formed using a series of suffixes . The basic word order is SOV (subject - object - verb). The Eskimo languages ​​are ergative , the agent of a transitive verb is marked by the ergative , the agent of an intransitive verb and the patient ("the object") of the transitive verb is marked by the absolute . (Since the ergative also takes on the function of the genitive, it is usually called relative in the grammars of Eskimo languages .) In Aleut, the question of ergativity has not yet been clearly clarified. The noun precedes its defining additions ( attributes ), but the genitive comes before its noun (“man's house”). There are postpositions (no prepositions ) used. Because of the polysynthetic structure, the distinction between the categories word and sentence is problematic.

In contrast to the neighboring languages ​​of North Asia, the Eskimo-Aleut languages ​​have no vowel harmony . The category gender does not exist, no articles are used. The 1st person plural does not differentiate - like the majority of neighboring Indian languages ​​- between inclusive and exclusive forms (depending on whether the person addressed is included or not). The part of speech adjective does not exist, it is replaced by participles of verbs of state .

It is a common misconception that Eskimo-Aleut languages ​​have numerous words for snow . The rumor was started in 1940 by Benjamin Lee Whorf . This information was  apparently unchecked by others - also in reputable publications such as the science pages of the New York Times - and supplemented with freely estimated figures, which were cited in the same way up to that of "four dozen", "one hundred", or even "Two hundred" different allegedly existing word stems could be read. In fact, there are only two words for snow in West Greenlandic, for example: qanik "snow in the air, snowflake" and aput "snow on the ground".

Some examples from the Inuit in Greenland

For the ergative construction

In the plural there is no distinction between the forms of the absolute and the ergative:

The forms of the ergative and genitive coincide in Greenlandic, which is why this case is collectively referred to as relative. The genitive reference is marked twice: once through the use of the preceding relative (genitive), in addition through a possessive suffix on possession. (Comparable is the colloquial German education "dem Mann seine Haus", except that here the dative is used for the owner.)