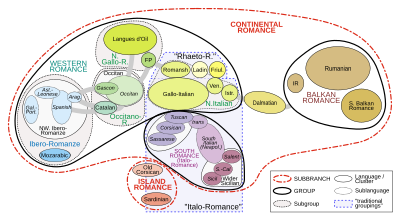 History of the linguistic classification of the Romance languages

One of the first to classify and write about the Romance and other European languages ​​was Rodrigo Jiménez de Rada with his History of the Iberian Peninsula from 1243 De rebus Hispaniae . De Rada distinguished three major groups, which he divided into the Romance, Slavic and Germanic languages; he also mentioned other languages, such as Hungarian and Basque . In the Spanish Renaissance , Andrés de Poza (1587) wrote down the first classification of the Romance languages. It was an overview of the Romance languages, which also included Romanian and retained their meaning until the 18th century.

The general development, which began in the 16th century, continued to advance. Joseph Justus Scaliger arranged languages ​​into a Romance, Greek, Germanic and Slavic family, Georg Stiernhielm specified and expanded this classification. Sebastian Münster recognized a relationship between Hungarian, Finnish and Sami. Claudius Salmasius showed similarities between the Greek and Latin and the Iranian and Indian languages.

In Germany , Friedrich Christian Diez, with his "Grammar of Romance Languages" from 1836, is considered the founder of academic Romance studies. Diez wrote scientific works on Provencal literary history, such as "The Poetry of the Troubadours" (1826), "The Life and Works of the Troubadours" (1829). In his comparative grammar of the Romance languages ​​- published as a three-volume work between 1836 and 1844 - he stated that all Romance languages ​​go back to Vulgar Latin. His students in Bonn included u. a. Hugo Schuchardt , Gaston Paris and Adolf Tobler . In 1876 he was succeeded by Wendelin Foerster at the University of Bonn . In 1878 he founded the “Royal Romanesque Seminary” as the first university institute for this discipline. He, too, devoted himself to researching the languages ​​that developed from Latin.

History of the Romance Languages 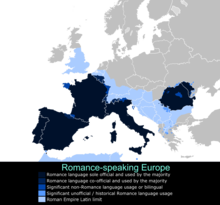 In the dark-colored areas, a Romance language is the official language and the majority language today . Light blue: Spread of the Latin language in the Roman Empire.

The Roman Empire at its greatest expansion (116 AD)

In contrast to most other language groups, the original language of Romansh is well documented: It is the spoken Latin of late antiquity (folk or vulgar Latin ). Latin itself is not considered a Romance language, but is counted together with the Oscar - Umbrian language to the Italian languages , of which only Latin today still has "descendants", namely the Romance languages.

The Romanization began as spread of the Latin language in by the Roman Empire administered territories. This spatial expansion peaked around AD 200.

The areas in which there are only relics or indirect evidence of Latin such as place names are called Romania submersa ("submerged Romania"); Romania continua is used in connection with the part of Europe that is still Romansh- speaking today. With Romania nova ( "new Romania") that region is called, in which a Romance language only through the modern colonization has come.

While the ancient Indo-European languages ​​that developed from the original Indo-European language, such as Sanskrit and then, to a lesser extent, Greek and Latin, were from a synthetic language structure , the development of vulgar Latin dialects and languages ​​increasingly led to an analytical language structure . This change had far-reaching consequences. While in more or less pure synthetic languages ​​the word order is free and thus ensures flexible expression, in the analytic languages ​​the relationships must be expressed through word orders. For this purpose, in the course of this turn to the analytical structure of the Romance languages , the speakers created articles before the nouns, personal pronouns before the verbs, introduced auxiliary verbs into the conjugation, replaced the case with prepositions and introduced adverbs to compare the adjectives and much more.

Morphologically , the Romance verbs have retained the use of word forms in many respects, but also show a tendency towards analytical formations in many places. In the morphology of nouns, however, the development was different, there was a far-reaching loss of the case - a development that can already be traced in Vulgar Latin, where Latin case endings were regularly replaced by prepositions.

This development towards the Romance languages ​​resulted in a completely different syntax . Although the verb forms are still strongly marked , i.e. the predicate retained its compact position, the syntactic relationships between the clauses were no longer expressed by the case, but by prepositions and the more rigid word order. This made the sentence order rules simpler for the speaker , because syntactically related units remain next to each other. 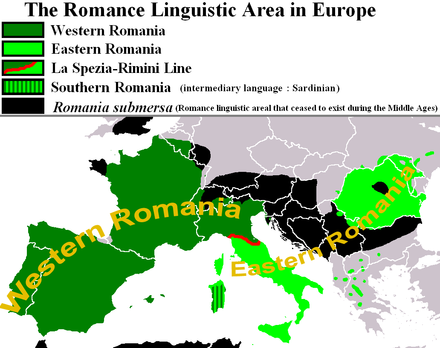 The Romance language area in Europe and its main groups

The Romance languages ​​can be divided into several subgroups according to partly system linguistic, partly geographical criteria. In the following list of Romance languages, it should be noted that it is difficult to list many Romance idioms , as they are sometimes listed as independent languages, sometimes as dialects , depending on the source . This is due to the fact that they do not have a uniform standard language , but are mainly used alongside another standard language, especially in informal contexts ( diglossia ).

The most important distinction among the Romance languages ​​in the field of historical phonology and morphology is that between Eastern and Western Romance languages . For West Romanesque the whole are Ibero-Romance and Gallo-Roman and the northern Italian varieties and Romansh languages ( Romansh , Ladin and Friulian ) expected; for East Romance the Italian (with the exception of North Italian varieties ) and the Balkan Romance . The Sardinian is usually quite exempt from this distinction, as it can be clearly assigned to either group. 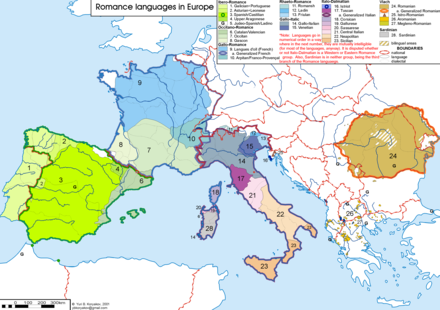 The current spread of Romance languages ​​in Europe 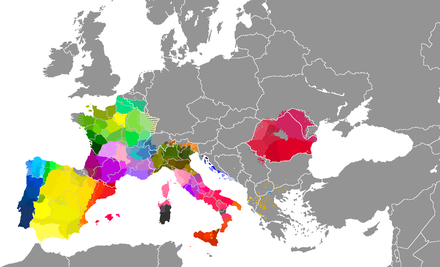 Romance languages ​​and their dialects in 19th century Europe

For Ibero Romanesque include the Spanish , the Portuguese and the Galician Language (the latter are sometimes a slide system together). The position of Catalan spoken in the north-east of the Iberian Peninsula (including Valencian ) is controversial; it occupies a transition position between Ibero-Roman and Gallo-Roman. The Ibero-Romance languages ​​also include:

The distinction between Gallo-Romanic and Iberor-Romanic and Italian-Romanic within the Romance dialect continuum is not clear. The Catalan occupies a transitional position between Gallo-Roman and Iberoromanisch that Gallo Italian varieties are purely systemlinguistisch considered more in common than with the rest of Italo Romanesque to which they are usually counted for geographical and cultural and historical reasons, the Gallo-Roman. The close connection with the Romansh of today's France becomes clear, for example, in the Gallic / Celtic relic words of Gallo-Italian , most of which can also be found in the Celtic relic vocabulary of the Transalpina.

The term Alpine or Rhaeto-Romanic languages is often used to summarize Furlanic , Graubünden Romance and Ladin . They were, as it were, isolated from the Gallo-Italian idioms when their speakers increasingly orientated themselves towards the Central Italian dialects.

The only standard Italian-Romance language is Italian . With the exception of Corsican and Monegasque, the remaining Italian-Romanic languages all belong to the scope of the standard Italian language and are therefore often classified as "Italian dialects". They can be divided into three subgroups, between which there are major differences:

The Sardinian in Sardinia cannot be assigned to any of the subgroups. It does not currently have a uniform standard language, but due to its system difference to the other Romance languages ​​it must be classified as an independent language in any case. Due to the cultural and linguistic Italianization of the Sardinians since the late 18th century, the language is nevertheless very endangered.

Romanian is the only standard language belonging to the Balkan-Romance language group (the dialects covered by the Romanian written language are also summarized as Dacorumanian ). In the Republic of Moldova , too , following a constitutional amendment, the official language is again Romanian instead of Moldovan .

Creole languages ​​based on Romansh

Some linguists also count the Romance-based pidgins and Creole languages as Romance languages. These "neo-Romanic languages" (Romania nova) can be divided into:

The following example sentences show grammatical and word similarities within the Romance languages ​​or between them and Latin:

Planned languages ​​partly based on Romansh