Occitan is a redirect to this article. Further meanings are listed under Occitan (disambiguation) .

Occitan (Occitan occitan [ utsiˈtɒ ] / lenga d'òc [ lɛŋgoˈdɔ ], French occitan / langue d'oc ) is the second Gallo-Roman language alongside French , which developed from Vulgar Latin in former Gaul . The varieties (dialects) of Occitan, which, in contrast to French, does not have a uniform, supra-regional written language, are mainly spoken in the southern third of France and other smaller areas. These include the north-west Catalan region of Val d'Aran on the territory of Spain and some Piedmontese Alpine valleys in northern Italy , as well as language islands created by emigration in southern Italy ( Guardia Piemontese ), in North America ( Valdese in North Carolina ) and in South America ( Colonia Valdense in Uruguay ). In the Waldensian settlements in southern Germany, the Occitan linguistic islands disappeared in the 20th century.

Occitan is only recognized as an official language in Catalonia (alongside Castilian and Catalan ) - in its variant Aranese from the Val d'Aran. In France (Northern) French has been the sole official language since 1539 , while Occitan is only one of the regional or minority languages ​​recognized by the French state in 1999 with some restrictions under the European Charter of Regional or Minority Languages .

Demonstration for Occitan as the school and official language. Carcassonne , October 22, 2005

The name Occitan is derived from òc , the Occitan affirmation particle, which originated from the neuter hŏc (Latin "this") of the Latin demonstrative pronoun hĭc ("this"). Among the Gallo-Roman languages , the varieties ("dialects") of Occitan are delimited as langue d'oc [lɑ̃ɡdɔk] from the langue (s) d'oïl [lãɡdojl] of northern France. The latter are named after the old French affirmative particle oïl "ja", which is composed of o <hŏc "this" and il "er" and later became oui (New French pronunciation [wi], [w] as in English w all). The name for the Languedoc region [lãɡdɔk], which is only part of the Occitan language area , also comes from the language name langue d'oc . The present name Occitan was acquired in German from Occitan and French Occitan . They go back to the Middle Latin word forms of the type lingua occitāna or occitānica , which have been documented since the beginning of the 14th century , which remained restricted to the Latin official language, in contrast to Mittelat. lingua oc ( langue d'oc ) but had no equivalent in the vernacular and was completely out of use towards the end of the Middle Ages, only to be revived in Latin by a few scholars from the study of medieval manuscripts in the 17th century. Based on their model, isolated documents for occitan (1819) and occitanique (1802) appear in French at the beginning of the 19th century , but only with the programmatic return to an "Occitan" culture and language, especially since the founding of the Ligue Occitane von In 1897, the word occitan was able to establish itself in parlance.

The classification of the Romance languages ​​on the basis of their affirmative particles (“yes”) can already be found in Dante Alighieri , who in his writing De vulgari eloquentia distinguished three main branches of the Romance languages based on the affirmative particles sì , òc and oïl . In doing so, however, he determined sì (from Latin sīc ) exclusively as a feature of Italian, neglecting Spanish (Castilian), which is probably little known to him, while he referred to the speakers of the lingua oc as "Spaniards" ( Yspani ) ( Dve  I, viii, 5), although in his work he then mainly cites southern French and not Catalan or “Spanish” Trobadors as representatives of poetry in the lingua oc .

Occitan as the Romance language of Galloromania

Occitan is an independent Romance language and its varieties are not dialects or patois of French, as is often wrongly assumed in France.

Map of the Languages ​​and Dialects of France; red the Occitan varieties (dialects)

Occitan developed from Vulgar Latin in southern Gaul. The differences in social and cultural development between the south and north of France in late antiquity and the early Middle Ages are also reflected in the different language development. Among other things, the varieties of the south, unlike those of the north, were hardly influenced by the Franconian superstrat . They changed less quickly in the phonetic field and thus retained greater resemblance to the other Romance languages.

By the 12th century, two different languages ​​emerged on the basis of the linguistic varieties that had emerged from Vulgar Latin in what is now France. French developed north of the Loire and Occitan to the south. In the 12th and 13th centuries it played an important role as a literary language (especially trobadord poetry ), which was not limited to the courts of southern France, but also preceded the literaryization of the Romance dialects in northern Spain, especially in Catalonia , and in Italy or shaped them sustainably. The Albigensian Crusade (1209–1229) ended this cultural flowering of Occitan.

In the course of the centralization on the linguistic level begun by Louis XIV , Occitan was abolished as the language of instruction in public schools and its use in everyday life was pushed back. Especially since the French Revolution from 1789, the language lost its importance, as the entire population was now included in the political life of the French central state and the educational system organized by it, which only used French.

1854 the poet and lawyer founded Frédéric Mistral for the purpose of reviving the Provencal language and literature, the language movement Félibrige that birth as a model for linguistic normalization of Occitan Provencal of Mistral Maillane the orthographic normalization ( "graphy mistralienne") did not try to enforce, was only adapted to the conditions of this dialect, but was also influenced by the orthography of (northern) French. In contrast, the linguist Louis Alibert orientated himself in his grammar of Occitan (1935) not on Provençal, but on Languedoc and in the spelling on traditional conventions from the tradition of medieval trobadord poetry ("graphie classique" ). His initiative was continued from 1945 by the Institut d'Estudis Occitans in Toulouse , and Robert Lafont finally adapted the rules of the IEO in 1951 specifically for the Provençal.

Street signs in French (above) and in Occitan (below) in Toulouse 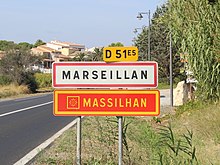 Place name sign for Marseillan in French and Occitan. The Occitan coat of arms and the colors (red and gold) appear on the sign.

Occitan is found in thirty-three French departments in the south of the republic. Its current speakers have usually already learned French as their primary language, only speak Occitan as a second language and use it mainly in their private lives. The proportion of older people outweighs younger people, men over women and rural dwellers over city dwellers. There are no official surveys; estimates and projections sometimes diverge considerably.

According to estimates published in 1993 by the European Bureau for Linguistic Minorities , of the 12-13 million inhabitants of the region, 48% could understand Occitan, 28% could speak this language, 13% read it, 6% write it, and about 9%, which is one to two million Speakers used them every day. Fabrice Bernissan came in 2012 after a detailed study of the situation in the Hautes-Pyrénées department and an extrapolation for the entire language area to only approx. 100,000 native speakers in France.

Occitan is now taught in some state schools in France and is used as the language of instruction in addition to French in more than 30 private schools (as of 2000), so-called Calandretas .

Around 65% (4,000–5,000) of the inhabitants of the Val d'Aran speak Aranese and 90% understand it. Here, Occitan in its Aranese variant is considered a co-official language alongside Catalan and Spanish.

In Italy, the number of speakers is estimated at 50,000. In the Occitan valleys of Piedmont, Occitan is spoken by 49.5% of the population.

We encounter Old Occitan (also called Old Provençal in older Romance languages) in documents and the poems of the troubadours. As the language of poetry, it is a common language ( Koine ) that largely bridges the differences between the dialects of Occitan. This language also raises problems with regard to its origin because the texts they use are only available in later copies, some of which reflect the dialectal language peculiarities of their writers. Grammarians of the 13th and 14th centuries also called the language of the troubadours lemozi (limousine). Poitevini and Languedoc could also be used.

Example of an old Occitan text :

Latin (as literally as possible):

The dialects of Occitan according to Frédéric Mistral

Example of a New Occitan text:

The vocabulary of Occitan is largely of Romance / Latin origin and is mostly similar to that of Catalan .

Linguistic peculiarities of some Neo-Occitan dialects