The title of this article is ambiguous. Further meanings are listed under Toulouse (disambiguation) .

Toulouse is located on the Garonne River at an altitude of 146 m. The city is connected to the Mediterranean and the Atlantic by canals - the Canal du Midi and the Garonne Lateral Canal . Toulouse is 589 km from Paris as the crow flies .

Under the name Tolose, Toulouse was an important Gallic city, which was then eight kilometers south of Vieille-Toulouse . Here 106 B.C. The robbery of the gold from Tolosa by Quintus Servilius Caepio . From this point on, Toulouse was an important city of the Roman Empire and Tolosa ( lat. ). It was the capital of the Gallia Narbonensis provincebetween the Mediterranean and the Atlantic and had between 20,000 and 50,000 inhabitants. Around the year 8 BC The inhabitants were resettled in the place of today's town center, presumably on Roman orders. From the 4th century, Toulouse was the seat of the Archdiocese of Toulouse . Numerous streets in downtown Toulouse still follow the layout of the Roman settlement.

413 Toulouse became part of the Visigoth Empire . The western and central parts of the Visigothic royal palace were partially excavated in 1988 under the Hôpital Larrey . The west wing alone had a floor area of ​​90 × 30 m. Sidonius Apollinaris described the complex. In 418 the Visigoths made a pact with the Roman emperor. In 507, after the defeat of the Visigoths against the Franks, the Toulouser Visigoth kingdom came to an end. In 721 the city was besieged unsuccessfully by Arabs for several months at the Battle of Toulouse . Between 781 and 843 Toulouse was the seat of the Kingdom of Aquitaine , after which the independent county of Toulouse was founded. During this time the city was the center of the Languedoc culture.

In 1208 Pope Innocent III called after the murder of his legate Pierre de Castelnau on the crusade against the Albigensians , in the course of which the city was sacked. In 1228 Count Raymond VII of Toulouse gave up the resistance after a grueling and destructive war of almost 20 years and signed the Treaty of Paris (1229) .

In 1271 the county of Toulouse came under the rule of the French crown, but retained some special rights. From 1444 to 1790, Toulouse was the seat of the Parlement de Toulouse , which was responsible for most of the south of France and exercised legislature, jurisdiction and executive there on behalf of the Crown . In particular, as the court of appeal, it decided in the last instance all civil proceedings (in the written procedure) and all criminal proceedings (in the oral procedure).

At the time of the Renaissance (around 1450 to 1550) Toulouse was one of the richest cities in France. Woad or pastel (Isatis tinctoria) , a plant that at that time provided the only permanent blue dye, thrived particularly well on the calcareous soils of the Lauragais, southeast of the city . Important secular buildings by pastel wholesalers in the Renaissance style, such as the Hôtel d'Assézat or the Hôtel de Bernuy, were built during this period. The dominant position of the city gradually ended after 1550 when the Portuguese began to import the cheaper indigo from their colonies .

Although many Protestants lived in Toulouse at the time of the Reformation , the city sided with the Roman Catholic during the wars of religion . In 1562 around 4,000 Huguenots were murdered.

In the 19th century, Toulouse hardly took part in the industrialization of France . In 1856 it was connected to the French railway network . The city grew and changed with the construction of large boulevards such as rue Alsace-Lorraine and rue de Metz . In 1875 Toulouse was flooded by the Garonne.

When Pierre-Georges Latécoère founded the aircraft factory in 1917, Toulouse became an important location for the French aircraft industry. Toulouse now has a technology park and is considered the aircraft and space capital of France.

In 2001 there was a devastating explosion at fertilizer nitrogen manufacturer AZF, which left 31 dead and 2,500 injured, destroyed large parts of the factory and caused considerable damage in the southwest of the city. The explosion could be heard up to 40 kilometers away.

In 2012, seven people were killed in a series of attacks in Toulouse and the surrounding area.

Since the 1980s, Toulouse has become one of the most important aviation centers in the world. Around 34,000 people work in this branch of industry, which has a long tradition in Toulouse:

In addition to the air ( Airbus and ATR ) and space industries ( Airbus Defense and Space ), the city also has mechanical engineering , iron and textile industries and is also a large trade and transport center . For example, General Logistics Systems France is based in the city.

Toulouse has a modern conference center and, since 1999, a multifunctional hall called Zénith with 9,000 seats.

Joseph de Rigaud , professor at the University of Law, was elected first mayor of Toulouse on February 28, 1790 and ruled for two years. Before that, the city was run by city councils ( capitouls ). Today the term of office is usually four years.

Toulouse has partnerships with the following cities:

In addition, cooperation agreements have been concluded with:

Toulouse is a school and student city with a total of over 97,000 students. This makes it the city with the most students in France after Paris and Lyon. The former University of Toulouse was founded in 1229; it was split up into three successor institutions:

The UPS mainly teaches natural sciences such as biology, physics, pharmacy, and computer science. But languages ​​also make up a significant proportion of university education. UT1 mainly houses the fields of economics, law and political science. Here, too, foreign languages ​​play a major role in everyday university life and the proportion of international students is very large.

We are also proud of Paul Sabatier , the 1912 Nobel Prize in Chemistry.

The importance of college life in Toulouse is also manifested in the wealth and variety of research laboratories on campus. The most important engineering schools are:

At the Institut catholique de Toulouse , the Catholic university, theology, philosophy and history, psychology and languages ​​are also taught. There is also the Toulouse Business School in the city .

Since over 5,000 Germans also live in Toulouse, many of them for professional reasons (especially as employees of the European joint venture Airbus), there has been a school offer since the 1970s, especially for their children, but also for children from binational families , in which they are taught in German and according to the German school system: 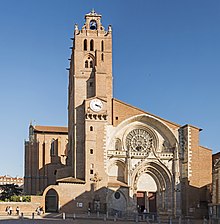 The Canal du Midi near Toulouse

The Capitol at night

The inhabitants of Toulouse are called in French Toulousains or Toulousaines .

Toulouse is also called la ville rose - the "pink city" - because of its numerous buildings made of red bricks . Well-known sights are:

Toulouse has a Jewish community; the oldest synagogue was built in 1856/57.

Toulouse-Blagnac Airport is located near Toulouse . It is used by the aircraft manufacturer Airbus for both scheduled services and as a company airport . Toulouse's main train station, Gare Matabiau , is located northeast of the city center, and the bus station is in the immediate vicinity. Today the drive to the capital takes just under four and a half hours; With the planned high-speed route LGV Bordeaux – Toulouse , the journey time to Paris is to be reduced to around three hours.

Since 1993 there has been a metro ( Métro Toulouse ), which initially ensured improved transport between east and west of the city with line A. Line B, which runs in a north-south direction, was inaugurated in summer 2007. In December 2010, an eleven-kilometer tram line was added from the Arènes transport hub in a north-west direction, including to Blagnac , which in December 2013 crossed the Pont Saint-Michelwas extended to the edge of the city center. A branch route to the airport was inaugurated in 2015. In addition, local passenger transport is supported by buses. The bicycle rental service "VélôToulouse" has also established itself as an important means of transport. Bicycles can be rented around the clock at 253 stations in the city.

The city is surrounded by a typically French, toll-free ring road ( Périphérique ), which is characterized by high traffic during peak hours, between 8:30 a.m. and 9:30 a.m. and from 4:30 p.m. to 6:00 p.m. In the city center there is a driving ban for cars on the first Sunday of each month.

Until the beginning of the 20th century, the Canal du Midi had contributed significantly to the economic prosperity of Toulouse. Today the waterway is mainly used for tourism, for example for houseboats . For example, visitors can take boat tours to explore Toulouse from the Canal du Midi or the Garonne . The Grand Parc Garonne project aims to upgrade the banks of the Garonne over the next few years. A large park is to be created which will be used for recreation and cultural events. The works include around 32 km of the river banks and also affect surrounding communities.

The town's sporting figurehead is first and foremost the Stade Toulousain club, formed in 1907 , with 19 titles so far, French record champions in rugby union , which is very popular in south-west France. As the most successful club at national and international level, Stade also won the European Heineken Cup, which was held between 1995 and 2014, four times. The home games are played in the Stade Ernest-Wallon in the north-west of the city.

Fenix ​​Toulouse Handball is a handball club from Toulouse that was founded in 1964. The team plays their home games in the Gymnase Compans Cafarelli , which has a total of 5,000 seats . The winning of the French handball cup in 1998 can be counted as the greatest success in the club's history.

In football , too , the city has long been represented in the highest league in France, with men through Toulouse FC , founded in 1970 , which also refers to the traditions of its predecessor of the same name, which existed from 1937 to 1967. However, neither of them have won a French championship title so far. Their home games carries the crew of Téfécé the Stadium Municipal out. The soccer players from the "pink city" were more successful . Olympique Mirail and Olympique Aérospatial Clubalso played first class for years, and the TOAC was even three times national champion at the turn of the millennium; the players won a fourth title after the women's football division had switched to local rivals TFC in 2002 under his name.

Typical of Toulouse's cuisine is the cassoulet , a stew made from white beans and various types of meat, which in Toulouse always includes confit d'oie - canned goose meat - and country sausage. Also terrines de foie gras (poultry foie gras) and magret de canard - duck breast with green beans - belong to the typical urban kitchen. Violettes de Toulouse are sugared violets with which all kinds of desserts are decorated; with violet liqueur. There are numerous chocolatiers and cheese shops around the Marché Victor Hugo .

Famous people from Toulouse include the statesman Jean-Baptiste de Villèle , the singer and poet Claude Nougaro , the politician Jean-Louis Debré , the writer Bernard Werber and the football player Gaël Clichy .

From 1631 to 1665, Pierre de Fermat , the most important mathematician of the first half of the 17th century, was a councilor ( conseiller au parlement ) of Toulouse. Although he was born in nearby Beaumont-de-Lomagne , he is appropriated by the city of Toulouse and its historians as the gloire de Toulouse ("Glory of Toulouse").

→ Main article : List of sons and daughters of the city of Toulouse

Communes in the Arrondissement of Toulouse