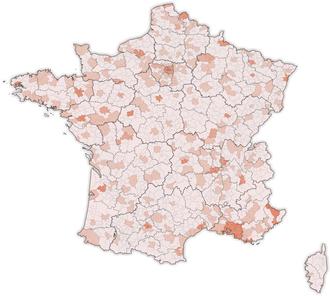 Établissement public de coopération intercommunale (EPCI, German public institution for intercommunal cooperation ) is the generic term for all types of municipal associations in France. There are different types of EPCI, which differ in terms of the scope of their competencies and the minimum number of residents represented. Since 2013, every French municipality has been legally obliged to belong to an EPCI. Since 2014, the municipal councils have been elected directly by the people.

The EPCI are corporations under public law. They are a form of établissements publics and thus, unlike the municipalities that come together in them, are not themselves independent territorial authorities ( collectivités territoriales ) . In particular, their competencies are limited to those areas that are assigned to them by law or by agreement between the municipalities involved.

The entry into force of an amendment from January 27, 2014 those were EPCI with fiscal competence, numbering at least 400,000 people in a metropolitan area of over 650,000 inhabitants, in Métro Poles converted. Exceptions were the Métropole du Grand Paris and the Métropole d'Aix-Marseille-Provence , which were to be formed on January 1, 2016.

As of January 1, 2018, there were 1,240 EPCIs in France (with their own tax collection, i.e. excluding the Syndicats de communes ), including 1000 Communautés de communes , 206 Communautés d'agglomération , 23 Métropoles and 11 Communautés urbaines . There are currently the four islands Île-de-Bréhat , Île-de-Sein , L'Île-d'Yeu and Ouessant that do not belong to any EPCI.

The decision-making body of an EPCI is the Comité syndical or the Conseil communautaire (association council). This body works essentially like a local council. Through its decisions, it deals with matters that fall within the competence of the EPCI. In particular, it decides on the budget. The committee meets at least once a quarter by order of its chairman. Its meetings are public, unless explicitly requested otherwise.

The chairman of the association council is the executive body of the EPCI. He arranges the expenses, is the head of the various departments of the EPCI and its legal representative. He can hand over part of his duties to his deputies, the number of whom is between 4 and 15, but must not exceed 20% of the number of EPCI employees. The chairman of the council is re-elected by the association council after each election according to the same modalities that are also used for mayoral elections.

Commons : Groups of communes in France  - Collection of images, videos and audio files

Types of French associations of municipalities