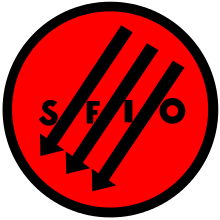 Logo of the SFIO

The Section française de l'Internationale ouvrière ( SFIO , German-  French Section of the Workers' International ) was a party in France from 1905 to 1969 . Her successor is today's Parti Socialiste (PS).

Since 1877 several socialist parties emerged in France , such as the Marxist Parti ouvrier under Jules Guesde , the Fédération des travailleurs socialistes and the Parti ouvrier socialiste révolutionnaire . In 1900 five socialist formations competed, the dividing lines of which existed on questions of the attitude to the class struggle and the revolution , the position of the trade unions , participation in government and party discipline . It was not until 1901 that the Parti ouvrier français and the Parti socialiste révolutionnaire united to form the Parti socialiste de France (PSdF) (French Socialist Party). She confessed to the revolution and the class struggle and rejected the ruling social system as well as government participation. In contrast, Jean Jaurès , Aristide Briand , Paul Brousse and Jean Allemane founded the Parti socialiste français (PSF) (French Socialist Party), which campaigned for a reformist model and parliamentarism.

Foundation of the SFIO

In 1905 the PSDF and PSF merged to form the SFIO; the leading figures of the new party were Jules Guesde , Jean Jaurès , Édouard Vaillant and Paul Lafargue . The most pressing concerns of the new alliance were anti-colonial convictions and the struggle against bellicose nationalism . Formally, revolutionary Marxism shaped the SFIO, which, despite the decisive influence of Jean Jaurès, rejected any participation in government. The party recorded a steady increase in elections. On the eve of World War I , since the parliamentary elections on April 26 and May 10, 1914, it was the second largest parliamentary group in the Chamber of Deputies .

In July 1914, Jaurès spoke passionately against the impending world war in front of large crowds of demonstrators. On July 31, he fell victim to the murder attempt by a nationalist assassin. Shortly thereafter, the vast majority of the SFIO agreed to the defense war and the granting of war credits . In their participation in the Union sacrée , critics saw a betrayal of the pacifist convictions that had been represented for years .

At their congress in Tours in 1920, the supporters of the SFIO split up into supporters and opponents of the communist Third International (Comintern) . The former, the majority, subsequently formed the Parti communiste français and took over the administrative apparatus and the party newspaper L'Humanité , while the minority remained in the SFIO.

The lawyer and publicist Léon Blum became the new leader of the SFIO, supported by Vincent Auriol and Paul Faure ; they sought a policy of unifying left-wing parties, which ultimately led to the victory of the Cartel des gauches in 1924 . Under Blum's leadership, the SFIO pursued the parliamentary tactic of only participating in governments with a socialist preponderance. Domestically, she advocated republican-parliamentary democracy, the nationalization of key industries, the introduction of a capital tax and radical social legislation . In terms of foreign policy, the SFIO represented the principles of collective security in the League of Nations and advocated international disarmament .

In 1936, the SFIO, the strongest faction, formed the Popular Front government with the radical republican party , tolerated by the Communist Party.

Among the 80 MPs who voted against the transfer of all powers to Philippe Pétain after the defeat in 1940 , a large number were MPs from the SFIO.

After the Second World War , the SFIO lost its leading position in the left-wing camp to the Parti communiste français (PCF). From 1946 to 1973 the PCF regularly outperformed the socialist parties. In the post-war period, the French workforce was mainly organized in the PCF. Several small socialist currents (Fédération de la Gauche Démocrate et Socialiste or Convention des Institutions Républicaines (CIR)) and parties ( Parti Radical Socialiste or Parti Socialiste Unifié (PSU)), led by the strongly anti-communist SFIO - which in the course of their Post-war history increasingly developed into a party of notables - competed for the voters. In the 1960s, when the socialist presidential candidate Gaston Defferre only achieved 5%, the socialist and social democratic currents in France were renewed in around 120 different clubs. In May 1968 , when Paris and the whole of France were temporarily standing still due to a wave of strikes, the weakness of this lack of programmatic and organizational unity of the socialist left, which led to the creation of the PS, was revealed.

SIFO was also active in French-occupied Algeria. In the post-war period, Abdur Rahman Farès joined SIFO and in 1946 became a member of the first national assembly of the Algers department for them . Farès was briefly interim president of Algeria in 1962.

In July 1969, at the Congress in Issy-les-Moulineaux , the SFIO (and the Parti Radical Socialiste) became the Parti Socialiste (PS), which still exists today . Only the unification of the non-communist left in the PS as the third-strongest political force at the time made it possible to reactivate the alliance with the PCF, which ultimately resulted in François Mitterrand's presidency in 1981 .