The Compiègne armistice in World War II was signed on June 22, 1940 between the German Reich and France and ended the campaign in the west . In French , both armistices in 1918 and 1940 are called Armistice de Rethondes , after the village of Rethondes, three kilometers east of Compiègne . The armistice envisaged the occupation of 60 percent of French territory in Europe by the German Wehrmacht . In the unoccupied part of France, the Vichy regime , which was closely related to Germany, was formed . The terms of the armistice were tantamount to a surrender of France, it lost its former sovereignty . The Vichy regime protested as early as September 1940 against the de facto annexation of Alsace-Lorraine, contrary to international law, and further breaches of treaty by the German Reich.

The so-called seated war ended on May 10, 1940 with the attack on the Netherlands , Belgium and Luxembourg ("Fall Gelb") and the advance through France to the Channel coast at the mouth of the Somme . This was the first part of the western campaign . Since it succeeded quickly, the Wehrmacht was able to begin the second part on June 5, 1940: the red case, the advance into southern France and towards the Swiss border. The French army suffered an unprecedented military defeat. Using the strategy of the Blitzkrieg , the German Wehrmacht succeeded in destroying the French and British troops in Belgium and northern France. This was favored by some mishaps and wrong decisions, hesitation on the French side, e.g. B. in the battle of Sedan , outdated strategies, insufficient motorization of the French army and the fact that a (too) large part of the army was left on the Maginot Line . Paris was declared an open city on June 10, 1940 and captured by German troops on June 14. The head of government of the Third Republic Paul Reynaud announced his resignation in the face of the defeat on June 16, 1940. Marshal Pétain was appointed as the new head of state . One day later, Pétain, celebrated as a national hero since the Battle of Verdun in 1916 , asked for an armistice with the German Reich . 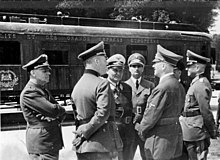 Armistice negotiations between France and Germany, June 22, 1940; left Wilhelm Keitel as the German chief negotiator, opposite him on the right Charles Huntziger , who had to accept the conditions of the Nazi regime

The German dictator Adolf Hitler saw this request as a welcome opportunity to avenge himself for the defeat of 1918 and especially for the Versailles peace treaty largely dictated by the Allies, which was felt to be too hard. As a place he chose the clearing of Rethondes near Compiègne , d. H. the same place where the armistice was signed in 1918. The negotiations took place in the wagon that was also used 22 years earlier; Hitler had specially fetched the Compiègne car from the museum and had it put on the tracks. In the run-up to the negotiation, the French monument commemorating the victory in 1918 was covered with the imperial war flag . Again, the terms of the armistice were largely dictated , this time from the German side. These conditions amounted to a capitulation of France, because they ended the existence of a sovereign French state - the Third French Republic  - in favor of the Vichy regime.

The German demands of 1940 arose partly from the need for the German army to use the territories against Great Britain for further warfare and to make it impossible for France to continue the fight, but partly also from more extensive annexation and 're-population' plans as they had been proposed in a memorandum from the responsible State Secretary Wilhelm Stuckart . Northern France and the coastal areas facing the Atlantic , a total of 60 percent of the country, fell directly under German occupation. The departments of Nord and Pas-de-Calais (both partly Flemish-speaking) were placed under the military administration in Belgium and northern France . The French army was set at 100,000 men. The status of the French prisoners of war should be clarified in a subsequent peace treaty. Article 3 left the French government free to take its seat in the unoccupied part of France or in Paris. Article 19 provided that France had to extradite all German citizens designated by the German Reich who were on French territory. In France, too, the Wehrmacht pursued the strategy of letting its occupation troops be fed by the defeated country. The French state was obliged to bear the cost of the German occupation  - 20 million Reichsmarks per day. The internal relations of the French colonies remained untouched. The French navy was not to be completely demobilized; according to Article 8, part of the navy was released to protect French interests in the French colonies.

An armistice commission was set up on June 30, 1940 to settle contentious issues, which was supposed to exist for the time of the occupation and which resided in Wiesbaden. Its name was the German Armistice Commission (DWstK), it had a branch in Paris and control inspections in Bourges and North Africa and was subordinate to the High Command of the Wehrmacht (OKW). The Armistice Commission was originally seen as the legitimate liaison between the German government and the French government. The chairman of the commission was until February 1941 the commanding general of the II Army Corps, General Carl-Heinrich von Stülpnagel (later military commander), then general of the artillery Oskar Vogl . The three branches of the armed forces each appointed a senior officer as a member of the commission, who were the heads of the respective sub-commissions Army, Air Force and Navy. The head of the French delegation was General Charles Huntziger until September 14, 1940 , then General Paul-André Doyen .

Consequences of the armistice

The armistice came into force on June 25, 1940. It did not envisage any territorial changes. Between June 15 and 22, the German Reich placed the departments of Bas-Rhin , Haut-Rhin in Alsace and Moselle in Lorraine under German civil administration and de facto annexed them . On June 28th the Germans entered Strasbourg ; in September the city's synagogue burned down . The Army High Command appointed Robert Wagner , the Baden Gauleiter, and Josef Bürckel , that of the Saarpfalz Gaus, as chiefs of civil administration , who immediately nullified the agreement.

Alerted by the plans of the Pétain government, Charles de Gaulle - then State Secretary of the war state - went into exile in London. There he gave a radio address to the French people on June 18, 1940, which was broadcast by the BBC . A few days after the conclusion of the armistice, de Gaulle combined the 110,000 French soldiers remaining in England to form the Free French Armed Forces (Forces françaises libres) and proclaimed the continuation of the war. The treaty delayed the formation of a resistance movement ( Résistance ) on French soil, as the authoritarian collaboration regime suppressed it through repression . As a direct military consequence of the armistice, the British Navy shelled the French fleet at Mers-el-Kébir a few days after the events so as not to let them fall into German hands (see Operation Catapult ).

Extradition Article 19, Paragraph 2 was used by the German Reich to get hold of racially or politically persecuted emigrants. At the request of the German Foreign Office, these were arrested by the French police and usually handed over to the Gestapo . From there they were usually sent directly to a concentration camp , which meant certain death for the majority.

On Hitler's orders, the wagon, the memorial stone (see design of the clearing of Rethondes ) and the French victory monument were brought to Berlin. The memorial sites including the two stones marking the spot where the two wagons stood on November 11, 1918 were destroyed. The inscription on one of the two stones read "L [e] s pl [é] nipotentiaires Allemands", d. H. "The German authorized representatives". Only the monument to Marshal Foch has been preserved.

Today France sees one of its most important historical monuments again in the Compiègne carriage , the original of which was produced by the Ringhoffer works in Smichow . The place where the two armistices were signed has also become a place of reconciliation between France and Germany . Opposite General Foch's monument in the clearing, an oak tree grows from the forest of the former Crawinkel air ammunition plant . The young tree was dug up where the Compiègne wagon was ultimately destroyed in 1945.

On September 3, 1940, General Huntziger protested for the Vichy government on twelve points against the annexation of Alsace-Lorraine and the associated breaches of treaty by the German Reich:

Huntziger's successor General Paul Doyen also formally objected to the expulsions of French families from the three eastern departments, who would be deported to the unoccupied part of France. In addition to residents who had fled more or less voluntarily (and were not allowed to return), the Germans had deported around 54,000 Alsatians and Lorraine residents to the rest of France by the end of September 1940. This number was doubled by the end of 1940.