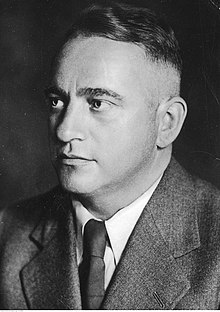 Josef Bürckel (born March 30, 1895 in Lingenfeld , † September 28, 1944 in Neustadt an der Weinstrasse ) was a National Socialist Gauleiter and bureaucrat in high political offices. Between 1935 and 1936 he was the “ Reich Commissioner for the Restructuring of the Saar Region ”, from 1938 “Reich Commissioner for the Reunification of Austria with the German Reich” and from 1940 to 1944 “ Reich Governor of the Westmark ” based in Saarbrücken and “ Head of Civil Administration ” (CdZ ) in Lorraine .

In 1939 Bürckel initiated mass deportations of Jews from Vienna , in October 1940 with the Baden Gauleiter Robert Wagner the deportation of the remaining Jews from the Gau Baden and the Gau Saarpfalz, known as the Wagner-Bürckel Action , and in November 1940 the expulsion of 60,000 Lorraine residents.

Bürckel was born in the southern Palatinate as the youngest of four children of the baker Michael Bürckel and his wife Magdalena. He was catholic. In 1920 Bürckel married Hilda Spies from Landau, with whom he had two sons.

After elementary school in Lingenfeld, Bürckel attended secondary school in Karlsruhe , and from 1909 to 1914 the teacher training college in Speyer . At the First World War he took from 1914 to 1916 as a volunteer , first in the 12th , from 1 January 1915 at the 20th Bavarian Field Artillery Regiment in part. At the end of 1915, while on leave from the front, he passed the examination for the teaching post; as a candidate he was active in Lingenfeld, Ramberg , Bellheim and Minfeld . In 1919 he passed the practical teacher examination and then worked as a primary school teacher, until 1920 in Roxheim , then in Rodalben and from 1927 in Mußbach .

Bürckel joined the NSDAP in 1921 as member 33,979 . From 1923 he took part in actions against the separatist movement in the Palatinate ; He is said to have been involved in the storming of the Pirmasens district office on February 12, 1924 in the background . In 1925 he rejoined the NSDAP, which had previously been temporarily banned. From 1940 until his death he was also the country leader of the " German People's Community in Lorraine " (DVG), the NSDAP offshoot in occupied Lorraine .

The Villa Böhm in Neustadt an der Weinstrasse, Bürckel's official residence for many years

From 1926 Bürckel was, as the successor to Friedrich Wambsganß , NSDAP Gauleiter of the Palatinate . On May 3, 1933 he was also Gauleiter or acting Gauleiter for the Saar area . This appointment was made two years before the Saar referendum on January 13, 1935, when the result was the “re-annexation” of the Saar area to the German Reich . However, Bürckel was only an official Gauleiter for a short time, because on March 31, 1933 , the responsible government commission declared the parties of the Saar area to be independent and thus formally separated them from the German Reich. Alois Spaniol was therefore used as Bürckel's straw man, but came into conflict with his unofficial superior. In 1935, Bürckel succeeded in using Jakob Pirro instead.

In 1935 the Gau Saarland was merged with the Gau Rhein-Pfalz to form the Gau Saarpfalz , which was expanded in 1942 to include the CdZ area of ​​Lorraine to Gau Westmark . In 1935 and 1936, Bürckel was " Reich Commissioner for the Reorganization of the Saar Region". Thus he held an office that corresponded to the position of Reich governor. Bürckel held the office of Gauleiter until his death in 1944. From 1935 until his end he resided in the castle-like Villa Böhm in Neustadt, a work by the Jewish architect Ludwig Levy . In the district of Stauf in the north of the Palatinate , Bürckel had the Lassmichinruh hunting lodge built, where he often spent his free time with party friends.

Bürckel was considered a supporter of Gregor Strasser's rather socialist line and came into conflict with the Palatinate MP Ludwig Schickert .

On March 13, 1938, Bürckel was commissioned to reorganize the NSDAP, which had been banned in Austria since 1933, and to prepare the referendum after the annexation of Austria , which took place on April 10, 1938. After the vote, he became “Reich Commissioner for the Reunification of Austria with the Reich” that same year and thus an agent for bringing Austria into line. This initially referred to the commissar system: In Austria by this time there should have been around 25,000 so-called “wild commissioners” (especially in Vienna ), for whom, according to the Wiener Zeitung of June 3, 1938, “an orderly economic life would be permanent no more employment ”. Some of these commissioners have also confused "mine and yours" (according to this newspaper) . In July 1938, Bürckel finally brought the commissioner system under his control. Between 1939 and 1940 he was Gauleiter in Vienna, Reich Governor of the Ostmark and Reich Defense Commissioner ( Military District XVII) and thus responsible for the mass deportations of Vienna's Jews.

Since 1936 Bürckel was SA-Obergruppenführer and from 1937 SS-Gruppenführer . He was also SS-Obergruppenführer (SS-No. 289.830) in the NS Motor Corps from January 30, 1942 . After the armistice with France he was head of the civil administration of Lorraine, which he wanted to insert into a Gau Westmark . From March 11, 1941, his title was Reichsstatthalter in Westmark. From 1930 until his death in 1944, Bürckel was a member of the Reichstag .

Stumbling blocks for victims of the deportation in Bürckel's residence Neustadt: Karl Strauss , religious official and city councilor, and his wife were gassed in Auschwitz.

On August 20, 1938, Bürckel set up the Central Office for Jewish Emigration in Vienna and, as early as 1939, supported the head of the Central Office Adolf Eichmann in carrying out the first mass transports of Viennese Jews to Nisko near the Soviet border at the time. The first transports of the Nisko plan started at the end of October 1939 and were a “series test from a laboratory. […] With each attempt it is noted […] this is research work, scientifically studied final solution ”. In November 1939, Bürckel urged Himmler for further transports, but these were not approved by the Nazi Reich leadership. These first transports were described by Jonny Moser as the beginning of the Shoah . Of the more than 5000 deported Viennese Jews, only 500 returned to Vienna after 1945. Against the background of these first deportations, in Lorraine, Bürckel organized the deportation of the French families who had moved here after 1918 and the long-established “French friends” to central France. On 22 October 1940 he was with Robert Wagner in the Wagner-Bürckel action than 6,000 Jews from Baden and the Saarpfalz in concentration camps deport the unoccupied Vichy - France were such. B. in the Camp de Gurs . Many of the deportees perished in the first few weeks as a result of the stresses and strains of hunger, cold and wet. Most of the survivors were murdered in extermination camps from 1942 onwards .

Involved in the Sponeck assassination

On July 23, 1944, in the military prison of Fortress Germersheim , the imprisoned Lieutenant General Hans von Sponeck was shot by the SS on Himmler's orders , after Bürckel had pointed out the prisoner Sponeck shortly before. In 1941 Sponeck ordered his army corps to withdraw from the Crimea without consulting him and was sentenced to death for "negligent disobedience in the field". In 1942 Adolf Hitler commuted the sentence to six years imprisonment. 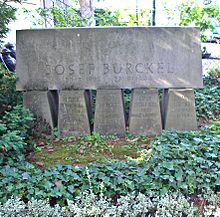 Bürckel died of natural causes on September 28, 1944. Richard Siebeck , then head of the Heidelberg University School, diagnosed around 11 p.m. on September 27, 1944: Toxic collapse, dysentery and poor general condition . The cause of death a few hours later was circulatory failure . Five days after Bürckel's death, Hitler awarded him the Teutonic Order , the highest distinction of the NSDAP.

His tomb in the main cemetery of Neustadt an der Weinstrasse achieved inglorious fame in 2017 . This was only created on August 23, 1947, when - by resolution of the Neustadt city council on August 5 of that year - the original grave, laid out during the Nazi era in the honor grove of the cemetery, was repealed and reburied in a "desolate old grave in the northeast corner of the cemetery ”.

The tombstone made of sandstone consists of five truncated pyramids, over which a stone bar marked with the personal data is placed. It was classified as a “historical monument ” worthy of preservation by the monument authority in Mainz, without it being able to be assigned any significance as a work of art . That is why the stone had to be put back there in 2016 after it was removed at the request of the descendants after the grave was dissolved. Subsequently, the measure was heavily criticized in public and the monument was referred to as a "mark of shame". On October 22, 2016, the 76th anniversary of the deportation of Jews, the name on the Bürckel memorial was covered with a white cloth and a red ribbon with the names of the 58 Jews deported from Neustadt was wrapped over it. The initiators of the association for the promotion of the memorial for Nazi victims in Neustadt wanted to "symbolically erase the name of the thousandfold murderer and give the victims their names back."

"I am ashamed that my hometown maintains a Bürckel memorial and is the only city in Germany that enables people to pay homage to a Nazi criminal."

Detail from the Bad Dürkheim altar painting by Paul Thalheimer with Gauleiter Bürckel to the right of the cross (with bowler hat and red nose). To the left an inserted original photo for comparison

In 1938/39 the artist and Nazi opponent Paul Thalheimer created a monumental altarpiece in the Ludwigskirche Bad Dürkheim showing a crucifixion scene. One of the criminals crucified next to Jesus clearly bears the facial features of Adolf Hitler. At the time, this apparently remained undiscovered, which is why today the picture is one of the region's very special art treasures. According to local lore, the painter immortalized other historical figures in the painting. It is not difficult to see Josef Bürckel to the right of the main cross, who is depicted with a red drunkard nose, probably because his high alcohol consumption was a topic of conversation everywhere.

The latter also gave rise to the corruption of "Gauleiter Bürckel" to the nickname "Bierleiter Gaukel" .