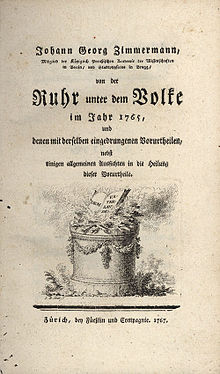 An early scientific work on the dysentery was Johann Georg Zimmermann's Von der Ruhr unter dem Volke in 1765, and those prejudices that penetrated with it, along with some general prospects for the healing of these prejudices (Zurich 1767)

As dysentery (outdated term dissenteria ; Latin dysenteria ) or dysentery (from Middle High German ruor " belly flow , dysentery, various forms of dysentery", from Old High German ruora "flow, rapid flow") is an inflammatory disease of the colon in a bacterial infection designated ( bacterial agitation ). In a broader sense, dysentery is also understood to mean diarrheal diseases that occur in the event of infections with parasites such as amoebas ( amoebic dysentery ) or lamblia or in virus infections .

The outdated expression Dysenteria catarrhalis , on the other hand, is used to describe celiac disease in the case of gluten intolerance.

The symptoms of dysentery were already described in ancient times by Hippocrates . The disease later appeared mainly as a war epidemic. Kiyoshi Shiga discovered a pathogen of dysentery in Japan in 1897, and Walter Kruse , Angelo Celli and André Chantemesse also described the same at around the same time in Europe : a gram-negative rod bacterium. This shigella are triggers of bacterial dysentery, and bacillary dysentery or Shigellosis called; they are mostly spread through contact with infectious feces or contaminated food. In addition, a through is protozoa , amoeba known caused dysentery, amoebic dysentery and amebic mentioned wherein the contaminated water is the most common cause of infection is.

The first signs of dysentery appear after an incubation period of approx. 2-3 days, colic-like abdominal pain and diarrhea . Defecation is very frequent, 8–30 times a day, and it is also painful ( tenesmen ). The stool is usually slimy and light ( white dysentery, "Lienterie"), less often bloody ( red dysentery ). Fever is also possible, but uncharacteristic. Usually recovery occurs after a course of 4 to a maximum of 14 days. However, the disease can lead to life-threatening dehydration due to the strong loss of fluids and electrolytes and, especially in young children, to central nervous symptoms, kidney failure and circulatory collapse. The most severe courses are observed with infections by the species Shigella dysenteriae , which was discovered in 1897 and which, in addition to enterotoxins , which can damage the intestine , can also form other toxins, called Shiga toxins . Infections with Shigella sonnei , on the other hand, are milder.

Reiter's syndrome can develop as a secondary illness : The Reiter triad consists of inflammatory processes in the eye ( conjunctivitis , iritis , eyelid swelling), in the urethra and in joints ( arthritis , bursitis , synovitis ).

In addition to symptomatic therapy, quinolone antibiotics , aminopenicillins , cephalosporins and cotrimoxazole are the agents of choice, but tetracyclines and sulfonamides can also be used. Sensitivity testing is indispensable for optimal therapy.