In addition, changes in the mucous membrane such as membranous and pseudomembranous coatings and vesicles can occur.

Conjunctivitis with a mechanical cause

Simple acute conjunctivitis can result from mechanical irritation, for example physical influences, smoke, dust and dry air. Unrecognized refractive errors or trichiasis can also be the cause of persistent conjunctivitis simplex acuta. The symptoms are redness, itching, burning, swelling of the eyelids, narrowing of the eyelids, sticky eyes when you wake up and a watery-slimy discharge.

The cause of conjunctivitis nodosa is toxic and mechanical infection with caterpillar hair or insect spines. The first stage is characterized by the appearance of the typical general symptoms of conjunctivitis (see above). In the second phase of this disease, granulomas form in the form of small nodules in the conjunctiva.

Therapy is carried out by using wetting eye drops, gels or eye spray. If possible, the cause of the lack of tear production or the wrong composition of the tear film, and thus the defective lipid layer, must be eliminated. 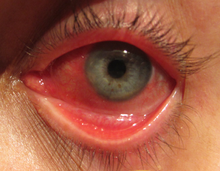 The disease, also known as allergic conjunctivitis or allergic conjunctivitis , is based on an allergy , i.e. a hypersensitivity reaction to a specific antigen ( allergen ), e.g. B. pollen (in this case one speaks colloquially of " hay fever "), dust, make-up or medication. Typical findings are severe itching, increased lacrimation, often pronounced swelling of the eyelids and abundant eosinophilic granulocytes in the tear fluid.

This form of conjunctivitis is characterized by the periodic occurrence of bacterial-allergic conjunctivitis and eyelid inflammation with small, milky-glassy, ​​gray nodules made up of lymphocytes and plasma cells (so-called phlyctenas ) with enlargement of the surrounding conjunctival vessels. The nodules disappear within a few days without further complications, but the recurrence rate is very high. Sometimes phlyctenas can also appear on the cornea. These lead to scarring of the cornea. In the differential diagnosis, tuberculosis should be excluded using a tuberculin test.

Eye drops containing glucocorticoids and the fight against the underlying disease (e.g. tuberculosis) are the focus of therapy.

The exact cause of spring catarrh has not yet been fully clarified. There is probably an allergic connection, as it is noticeable that spring catarrh is often associated with a type I allergy . But environmental factors also likely play a role. Spring catarrh usually shows itself in spring and autumn. The conjunctiva shows a reddish, cobblestone-like image, especially on the upper eyelids or around the cornea. This is an increase in tissue with numerous eosinophilic granulocytes . Those affected, especially children and adolescents, mainly suffer from a foreign body sensation.

The release of histamine from the mast cells (mast cell degranulation ) should be inhibited with eye drops containing cromoglicic acid. Systemic antihistamines or locally effective steroid drugs are also used. In some cases, the tissue proliferation has to be removed by means of an operation or cryotherapy.

A conjunctival sample is a conjunctival provocation test in which conjunctivitis is provoked by local application of an allergen solution (as an ophthalmic test for pre-testing X-ray contrast media and sera as well as for diagnosing e.g. tuberculosis (with old tuberculin n. Wolff-Eisner, Calmette)).

Conjunctivitis due to unspecific cocci

Conjunctivitis can be caused by spherical bacteria such as staph , streptococci, and pneumococci . Infection of the conjunctiva with these bacteria almost always occurs on both sides. As a purulent conjunctiva, it is characterized by purulent secretion and the formation of membranous or pseudomembranous coatings. The Parinaud conjunctivites are triggered by cocci-like bacteria .

For the therapy are antibiotics , such as neomycin , kanamycin , tetracycline and sulfonamides used in the form of eye drops or ointments.

Gonococci are the causative agents of gonorrhea ("gonorrhea"). Gonococcal conjunctivitis is a smear infection and is transmitted to the newborn during childbirth, for example (see also Ophthalmia neonatorum ). Therefore, in contrast to adults, gonococcal conjunctivitis occurs almost exclusively on both sides in newborns. In newborns, the infection develops within two to four days of birth. A typical eye infected by gonococci is pinched shut ( blepharospasm ) and severely suppurated. The conjunctiva is crimson and the eyelids are hard and swollen. This secretion is highly infectious ( gonoblennorrhea ). Additionally it can to involve the cornea ( cornea ) with ulceration and melting down and subsequently pronounced scarring come to the blindness of the newborn.

Therapy consists of the administration of antibiotics. Gentamicin , tetracycline , kanamycin and chloramphenicol can be used locally . Systemic antimicrobial therapy can be carried out, for example, with ceftriaxone or aqueous penicillin G solution.

As a preventive measure, the Credé prophylaxis with a one percent silver nitrate solution was introduced in the 19th century . Today, prophylaxis with 2.5% povidone-iodine solution is the more effective, cheaper and less toxic alternative.

Infection with the diphtheria pathogen Corynebacterium diphtheriae is the reason for this severe form of conjunctivitis. The pathogen can be detected with the Neisser pole stain . The conjunctiva on the back of the eyelids is partially dead ( necrotized ) and the eye is very ulcerated. The lymph nodes are swollen and the patient has a fever. In severe cases, the cornea is also affected and the eyelids are scarred ( symblepharon scars ).

Granular conjunctivitis or trachomatosa ("Egyptian grain disease") is a bacterial infection with Chlamydia trachomatis that can result in blindness .

Paratrachoma, also known as inclusion body conjunctivitis in newborns and pool conjunctivitis in adults, is a bacterial inflammation of the conjunctiva with Chlamydia trachomatis (serotypes D to K). This conjunctivitis occurs in developed countries, occurs suddenly, and can affect one or both eyes. The transmission mechanism of the pathogens is oculogenital and occurs in adults during intimate contact or in contaminated water in swimming pools. Affected newborns have become infected in the birth canal during the birth process. After eight to ten days, lymph follicles form on the conjunctiva of the upper eyelid , the conjunctiva is reddened and the eye secretes secretions. In newborns, this secretion is purulent. This is called blennorrhea . The symptoms can last for weeks. The paratrachoma heals without complications. In addition to eye discomfort, adults can also suffer from discomfort in the urinary and reproductive system, such as urinary tract infections. In newborns, in addition to eye problems, pneumonia , throat inflammation , inflammation of the bronchi , inflammation of the ears or gastrointestinal flu are possible. The diagnosis is made on the basis of the symptoms, immunofluorescence examinations and a cell culture . It is treated with local or systemic antibiotics such as tetracyclines .

A multitude of childhood diseases such as measles , rubella , chickenpox , but also other viral diseases can trigger what is known as accompanying conjunctivitis. This is usually bilateral and has fewer symptoms overall. Therapy consists of treating the underlying disease.

In principle, virally caused conjunctivitis can, depending on the pathogen, have a sometimes high risk of infection.

When epidemic keratoconjunctivitis is a highly infectious, in Germany notifiable disease . It is caused by an adenovirus belonging to the APC (adeno-pharyngo-conjunctival) virus group. Treatment is symptomatic with astringent eye drops and general pain relievers.

Acute hemorrhagic conjunctivitis is triggered by an enterovirus as a subgroup of the picorna viruses and a coxsackie virus and has caused epidemics in various regions of Asia, Africa and Europe since 1969 . The transmission is considered to be highly contagious and occurs through tear fluid, breath secretions and stool. Acute symptoms include a. very red and puffy eyes, subconjunctival bleeding, conjunctival chemosis and eyelid edema . Spontaneous regression is possible after a few days. Involvement of the cornea is rare. Serious neurological complications have been reported in isolated cases.

The loiasis , including Loa loa infection or called filaria-loa infection occurs in tropical West and Central Africa. The disease is caused by the nematode Loa loa . These are filariae up to seven centimeters long that can be seen under the conjunctiva in those affected without any further aids. The filaria escape when the eye of the affected person is examined with the slit lamp . Possible symptoms are itching and burning of the eyes caused by the movement of the worms. The treatment consists of local anesthesia and then removing the worms with tweezers.

The Ophthalmomyiasis , also called larval conjunctivitis, occurs when flying eggs penetrate under the conjunctiva. It is common in people in Central and South America and in regions with tropical or subtropical climates. Some of the larvae can be seen on the conjunctiva.

Depending on what triggers the conjunctivitis, a different treatment approach is necessary. If conjunctivitis is caused by other diseases, they must be treated first. In general, mechanical stimuli such as drafts or dust should be avoided (e.g. by wearing appropriate protective goggles).

In evidence-based medicine, bacterial conjunctivitis is usually treated with preparations containing antibiotics. In rare cases, when severe bacterial conjunctivitis occurs, it is necessary to accurately identify the causative agent. This enables the choice of the right antibiotic for the therapy. In alternative medicine, eyebright is used as a phytotherapeutic, but has no detectable effect.

In most cases of conjunctivitis caused by viruses, targeted therapy is not possible. However, if herpes viruses are the trigger, the administration of acyclovir can alleviate the course of the disease.

If the conjunctivitis is allergic in nature, the allergen must first be found out before therapy. This is done through allergy tests , as a result of which a desensitization can be started.