The title of this article is ambiguous. Further meanings are listed under pollen (disambiguation) . 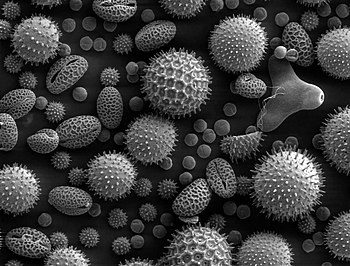 The pollen ( latin pollen , very fine flour, flour dust ' ) or pollen is the most flour-like mass, in the stamens of seed plants is formed. It consists of the pollen grains. As a result of a reduction division ( meiosis ) , these are haploid , i. H. their cells only have a single set of chromosomes . They thus correspond to the gametophytes of the mosses and ferns (see the article Diplohaplont ).

Pollen grains are surrounded by a resistant wall, the sporoderm, which, among other things, consists of sporopollenin . They serve to bring the male gametes (germ cells) protected to the female receiving organs and thus enable pollination and subsequently fertilization . 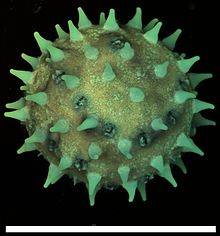 Pollen grain from hibiscus . The white bar is 170 µm long.

Pollen grains have a resistant wall, which is called the sporoderm here . The sporoderm consists of two layer complexes: the inner intine and the outer exine.

The intine is usually tender and not particularly resistant. It often consists of two to three layers, the outermost layer having a high pectin content, which makes it easy to detach from the exine. The inner layers consist mainly of cellulose fibrils. When the pollen grain germinates, the vegetative cell surrounded by the intine grows into a pollen tube.

The main component of the exine is the resistant sporopollenin , which builds up the exine in granules around six nanometers in size. This consists of two layers: the inner endexin and the outer ectexin .

Various substances are deposited or stored in the cavities of the tectum:

On the pollen grains there are one or mostly several germ openings (apertures). The exine is missing at these points. The pollen tube can grow through one of the apertures when the pollen germinates. The pollen grain has a proximal pole, which is the pole pointing into the center of the pollen tetrad, and a distal pole. The equatorial plane is perpendicular to the poles.

In the monocot and the basal dicots ( Magnoliidae ) mono-aperturate pollen predominates. Among the Rosopsida , tricolpate pollen and its modifications are predominant.

The aperture can be covered by an operculum, a structure completely separate from the rest of the sexine.

Pollen often carries static electrical charges . Since many flowering plants are capable of active electrical orientation , the plant can register the arrival of pollen (also adhering to insects) in the flower and, for example, open the flowers further. The electrical field it creates can change the plant within seconds to respond to incoming pollen or insects. But even with wind pollination, the difference in charge of the pollen is a selective advantage. This phenomenon is used for industrial electrostatic dusting .

In most cases, the pollen grains are spread out individually, i.e. as monads . In addition, they can also be released into the air in groups of two or four grains, in which case one speaks of dyads or tetrads. Tetrads form when the daughter cells of a pollen mother cell stick together. This is the case with the Ericaceae , for example . In the Cyperaceae three of the four daughter cells are reduced, so that pseudomonads arise.

Pollen grains can be held together in larger groups with pollen putty; Viscine threads, sticky threads made of sporopollenin, cellulose and / or proteins are another possibility. If the pollen grains of several pollen mother cells remain connected to each other, polyads of 8, 16 or 32 pollen grains arise , for example in the Mimosoideae . Larger groups are also known as massulae (singular: massula; diminutive of the Latin massa , (dough) mass). Examples are the acacias and many orchids .

If the entire contents of one or more pollen sacs remain connected, they are called pollinium . The pollinium is often surrounded by a common sporopollenin shell and occurs in some representatives of the Apocynaceae and orchids. A pollinarium is a pollinium with the appendage organs that serve to spread; in the case of orchids these are stems and adhesive discs. In Strasburger the definition differs from this as pollinium from one pollen sac, pollinarium from several pollen sacs.

Development of the pollen grain

Pollen grains are formed in the pollen sacs of the anthers of a stamen . After meiosis, four haploid pollen grains emerge from each pollen mother cell (also called microspore mother cell ) . In each pollen grain at least one further cell division takes place during the maturation, whereby in the angiosperms one or two small generative cells and a larger, surrounding this vegetative cell arise. The number of cells in the naked samers is higher, up to a maximum of 50. The pollen grains are fed by the tapetum, the innermost layer of the anther wall. Reserve substances ( proteins , carbohydrates and lipids ) are stored in the vegetative cell , and moisture is removed from the pollen grain during maturation. 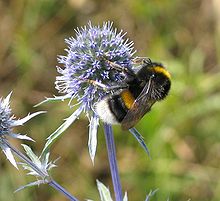 Bumblebee ( Bombus terrestris ) on a globular thistle during pollination.

The pollen is spread by the wind ( anemogamy ), water (hydrogamy) or by animals ( zoogamy ) (e.g. insects , birds ; see also bird flower ). Pollen has been around for an estimated 300 million years and is essential for pollination for more than half of plants. The pollen can be transferred from one flower to another ( pollination ).

Since pollen is widely distributed by the wind, among other things, and is often retained in lake sediments or peat , it is of great interest in geology and climate research . Based on the pollen found, conclusions can be drawn, for example, about the history of the forest in Central Europe and thus also about the climate of a geological period. The science that deals with this topic is called palynology . The origin of the honey can be determined based on the pollen it contains. This field of activity is known as melissa palynology . Pollen analyzes are also used to solve crimes ( forensic palynology ). In 1959, a murder in Austria was solved for the first time using pollen analysis.

Former bee on return to the hive, with filled "pollen pants" 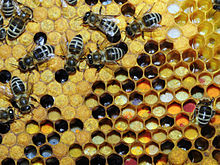 In beekeeping , a special device called a pollen trap can be attached to the entrance (entrance hole) of a beehive . This is essentially a grid through which the returning flying bees have to squeeze their way through, whereby they lose their “pollen pants”. The pollen clumps fall into a collecting vessel, which is usually emptied twice a day. The pollen obtained in this way must then be cleaned immediately (sort out foreign bodies) and dried. Like the bee bread , which also consists predominantly of pollen, the pollen is edible.

The pollen trap should be removed regularly so that the protein supply necessary for rearing the bees is guaranteed.

The pollen carried by the wind is problematic for many people with allergies . After contact with an aqueous phase, the pollen grains release a number of proteins, lipids and sugars. A specific immune reaction develops to some proteins and lipids, which triggers an allergic reaction on the second and every subsequent contact . This can be associated with reddened and watery eyes, sneezing and runny nose ( allergic rhinitis ). In the countryside the pollen concentrations are high in the morning, in the city in the evening. The Iatropalynologie deals with the elucidation of these effects.

According to the phenological calendar, due to the climate in Central Europe, the following types of pollen are usually found, depending on the regionally prevailing weather :