Tilia is a redirect to this article. See also tilia (disambiguation) and linden .

The lime ( Tilia ) over medium high German linden of althochdeutsch linta constitute a genus within the subfamily of tilioideae (Tilioideae) within the family of the Malvaceae (Malvaceae). 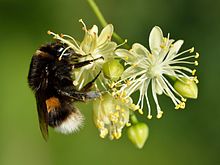 Inflorescence of the winter linden ( Tilia cordata ) with the dark bumblebee

Linden species are deciduous trees . They do not form terminal buds, so their growth is sympodial . Depending on the type of linden tree, they reach a maximum height of between 15 meters (e.g. Crimean linden tree ) and 40 meters. The achievable trunk diameter also varies from species to species, usually between 1 and 1.8 meters. They can reach an age of up to 1000 years. The bud scales fall off early.

The alternate leaves are arranged in two rows and are divided into a petiole and a leaf blade. The simple leaf blade is usually heart-shaped.

In the lateral, zymous inflorescence there are three or more flowers. A conspicuous, elongated large bract is long fused with the inflorescence axis; it serves as a wing for the falling fruit cluster. The fragrant, hermaphrodite flowers are radial symmetry and five-fold with a double flower envelope . There are five sepals with nectar glands at their base. The five petals are white or yellow. There are many stamens present; they are free or grouped in five bundles. The stamens are often forked. Five carpels are a fünfkammerigen ovary grown together. There are two ovules in each ovary chamber . The stylus ends with a five-lobed scar. Linden species have a five-leaf ovary. There are closing fruits developed.

With generative reproduction, pollination takes place by various insects, which are attracted by the intense scent of the linden blossom. These include bees and bumblebees, hoverflies and other dipteras . In some cases, however, there is also wind pollination . The seeds are mainly spread by the wind ( anemochory ).

Linden trees in particular, which grow as street trees in cities, are more frequently attacked by the linden spider mite . If the linden spider mite is heavily infested, the trees can be completely defoliated by July. Damage from the linden leaf wasp is also more common in street trees . The larvae of the great linden jewel beetle eat in and under the bark of well-sunlit areas of thick branches or the trunk of ailing linden trees. If the infestation is severe, the larvae can cause the branches to die off and break off and, as a result, the entire tree to die. The linden gall mite is often found on summer linden trees , but it is not counted among the pests.

20 to 45 species (plus some (mainly naturally formed) hybrids ) of the genus Tilia thrive mainly in temperate to sub-tropical areas spread . 19 to 20 species occur in China , around 15 of them only there. In Switzerland, linden trees can form small but species-rich mixed forests. The identification of the species is difficult, molecular genetic data suggest that the number of species is probably around 22. 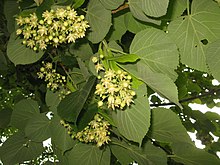 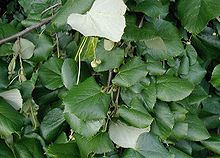 Depending on the author, there are 20 to 40 types (selection):

There are some hybrids, natural or by breeding :

In the forests of Central Europe , only a few species of linden are native to the summer and winter linden and (on the south- eastern edge of Central Europe ) the silver linden. Nevertheless, these tree species play a not insignificant role both in local customs and in forestry . 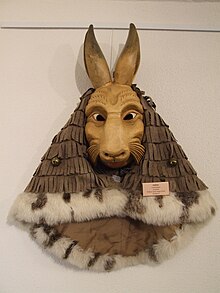 Traditional mask carved out of linden wood: the sea hare from Friedrichshafen

Among the linden trees, the winter linden ( Tilia cordata ), the summer linden ( Tilia platyphyllos ) and the Dutch linden ( Tilia × europaea ), a cross between the first two, are used as a source of wood. The linden is one of the mature wood trees and has a light heartwood that does not differ in color from the sapwood . The wood is light colored, whitish to yellowish and often has a reddish or brownish tinge and has a dull sheen. It is more rarely striped or spotted with greenish tones.

Limewood is mainly used in sculpture , carving and turning work. For example, the use of limewood in German sculpture was widespread , especially in the late Gothic period , for example by Tilman Riemenschneider and Veit Stoss . But even in much later times limewood was preferred as a material by sculptors, such as Ludwig Schwanthaler . Since statues of saints were often made of linden wood, it was considered "lignum sacrum" ( Latin for "holy wood"). Today, however, the more easily obtainable wood of the Weymouths pine ( Pinus strobus ) is used for carving work. In Germany, the annual consumption of linden wood for carving work is estimated at 3000 to 5000 m³.

Furthermore, linden wood is used as blind wood and barrier veneer in furniture production, it is also suitable for imitating walnut wood. Front sections of cuckoo clocks, drawing and drawing boards, hat shapes and wooden heads as models for wig-makers are often made of limewood. It is used to manufacture foundry models, toys, kitchen utensils and wooden slippers. Linden wood is also used to make barrels and containers for dry and odor-sensitive goods, to make cheap pencils and matches. In musical instrument making, it is used to manufacture harps, as a keyboard for pianos, as a body for guitars and as reed pipes for organs. Linden wood is also used to make drawing and filter charcoal. In the past, coal from linden wood was also used to produce black powder and as a dental care product.

Linde during flowering as is by beekeepers honey bees particularly appreciated because the bees from the nectar of considerable amounts of lime blossom the linden honey can produce. Linden blossom honey has the typical linden aroma, is light yellow to greenish-yellow in color, freshly liquid and crystallizes flaky or grainy over time. Dried lime blossom result in a medicinal tea , which has a calming effect on the nerves. It helps with colds with its sweaty and cough- relieving effect.

Before the introduction of linen and hemp (probably until late antiquity ), the fibers of the soft linden wood - the bast  - were used in Central Europe to make ropes, mats, bags and clothing. Linden bast was obtained from young linden trees (also called baest) in May by peeling off the bark, separating the soft inner side and placing it in the water until the bast came off, which was then dried in the sun.

Many places in Central Europe used to have their village linden, which formed the center of the place and was a meeting point for exchanging news and bridal gazes. At the beginning of May, dance festivals were mostly celebrated under this tree - sometimes on so-called dance linden trees . In addition, the village court was usually held here, a tradition that goes back to the Germanic court assembly, the Thing . The linden tree is therefore also known as the " court tree " or " court linden tree ".

After wars (or plague epidemics ) there was the custom of planting so-called peace linden trees. Most of the surviving specimens are reminiscent of the Franco-Prussian War of 1870/71, but some also of the Peace of Westphalia , such as the "Friedenslinde am Dreierhäuschen" in Ponitz , Thuringia , or of local warlike events such as the destruction of Ratzeburg .

About 850 places or districts in Germany have names that can be traced back to the linden tree. The name of the city of Leipzig, for example, is derived from the Sorbian word Lipsk and means Linden-Ort.

The town of Neuenstadt am Kocher in Baden-Württemberg was formerly known as Neuenstadt an der Linde. There was an ancient summer linden tree at the city gate. For centuries, its low side branches were supported by 100 columns, most of them made of stone. The oldest mention comes from the year 1448. In 1865 it had a circumference of 985 centimeters. Its last remains were destroyed along with the city in 1945.

The linden tree and especially its leaf is the symbol of the Sorbian people. In the Czech Republic , too , the linden tree ( Czech lípa ) is a national symbol tree, numerous place names are derived from it (e.g. Česká Lípa (Bohemian Leipa), Lipno reservoir , Lipnice, Lipník, Lípová). In Croatia , the lipa 'linden tree' is part of the legal currency as a sub-unit of the kuna .

Linden leaf tea ( Ihlamur Çayı ) is a very popular herbal tea in Turkey and is used in Turkish culture to treat ailments of all kinds.

Wilhelm Müller set a literary monument to the tree in his poem Der Lindenbaum . The setting of the poem by Franz Schubert became a musical arrangement by Friedrich Silcher for the folk song Am Brunnen vor dem Tore .

The song Dragostea din tei by the Moldovan pop group O-Zone sings about “love in the linden tree”.

Since 2014, the Lindenbaum Museum in Neudrossenfeld has been using models to show over 40 examples of guided linden trees in Europe, many of them dance linden trees.

Lime avenue in the cemetery of Ringkøbing in Jutland , Denmark

The largest closed linden forest in Europe is the Colbitzer Lindenwald in Saxony-Anhalt ; the linden tree population consists of winter linden trees.

The linden tree planted in 1991 in the Thuringian town of Niederdorla - the new topographical center of Germany as a whole - is an imperial linden tree , i.e. a cultivated form of the Dutch linden tree ( Tilia × europaea 'Pallida').

Distinctive single trees without assignment to a species