Jutland ( Danish Jylland [ ˈjylanʔ ]; adjective : "Jütisch" or "Jutland", Danish jysk ) is the western part of Denmark , which is located on the Cimbrian Peninsula and extends from the German-Danish border to the Limfjord . This makes up the entire Danish mainland of Jutland, while the other parts of Denmark extend over islands.

With reference to Denmark's historic southern border on the Eider , the Eider can also be viewed as the southern border of Jutland, as the region of southern Jutland between Eider and Königsau was initially an integral part of the developing Kingdom of Denmark and then from 1236 became the Duchy of Schleswig developed, which was tied to Denmark for centuries as the imperial and royal fiefdom of Denmark. As an alternative to the term Schleswig, there is also the older term Sønderjylland (≈ Süderjutland or Südliches Jutland ). Although the two terms Schleswig and Sønderjylland basically refer to the same region, today Sønderjylland is usually only used to refer to the Danish part of Schleswig / Sønderjylland.

According to both definitions, the offshore small islands such as Rømø , Fænø , Læsø , Anholt , Samsø , Endelave or Als Jutland are included.

The natural boundaries of Jutland form the sea areas in a clockwise direction: 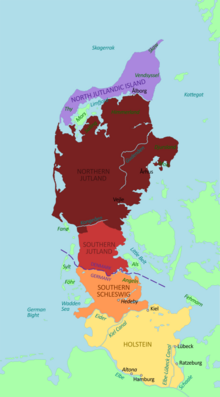 Territories on the Cimbrian (Jutian) Peninsula with English names.

The thirteen Danish Landsting in the Middle Ages

Jutland takes its name from the Jutes , a Germanic tribe that probably originally spoke a West Germanic language . Part of the tribe seems to have migrated south with the Suebi . A significant part emigrated to England (to the Medway) with the Angles and Saxons in the 5th century . The greater part that remained was assimilated by the North Germanic Danes , who had their home in what is now southern Sweden ( Scania ) and who settled Jutland from the Danish Islands. The settlement of Hvolris near Viborg dates from this period . The Jutes / Danes advanced south to the Eider , where they met Saxons and Slavs.

The name of the peninsula as the Cimbrian Peninsula goes back to the Cimbri , a Germanic tribe who lived around the 1st century BC. BC with the Teutons to today's Switzerland and then - split up - through the Rhône Valley to France or over the Brenner Pass to Italy.

In the year 811, the Eider was established as the state border in a peace treaty between Charlemagne and Denmark , whereby the border was temporarily moved to the Eider-Schlei line twice (see Danish mark ). In terms of political and constitutional law, the Eider or the Eider-Schlei line can thus be recognized as a border of Jutland. In the Middle Ages there were regional Landstinge in Nørrejylland (North Jutland) and Sønderjylland (South Jutland) . In the 13th century, the Duchy of Schleswig emerged from the area of ​​the three Sysseln of southern Jutland, which as a fiefdom of the Kingdom of Denmark was only indirectly subject to it. Most of the time, however, the Danish king also performed the function of Duke of Schleswig in personal union, so that he appeared in Schleswig as both king (liege lord) and duke (vassal). From 1460 he was also Graf, 1474 Duke of adjacent as fiefs to the Holy Roman Empire belonging Duchy of Holstein . On the west coast of Schleswig, the royal enclaves (e.g. Amrum, Westerland-Föhr, Listerland on Sylt) formed in the Middle Ages, which were not formally part of the Duchy of Schleswig, but were directly part of the Kingdom of Denmark. Linguistically and culturally, Old Danish or the Danish dialects that developed from it originally extended north of a line from Husum-Schwabstedt-Eckernförde.

In 1240 Jutland gave its name to Jutian law (Jyske Lov). It applied on the peninsula from Skagen in the north to the Kieler Förde - Levensau - Eider -Linie in the south including adjacent islands as well as Funen , Fehmarn and Heligoland . Some provisions of Jyske Lov are still in use south of the border, unless they are due to e.g. B. provisions of the BGB have been superseded. Until the reign of King Friedrich I in the 16th century, the laws of the Danehof were still directly valid in Schleswig. The southern Jutland or the Duchy of Schleswig can also be legally assigned to the Jutland area.

After the German-Danish War , sovereign rights to Sønderjylland and Schleswig went from Denmark to the Prussian-Austrian Condominium in 1864 and Prussia in 1866. Since the cession of North Schleswig from the German Empire in 1920, the border has now been in the area of ​​the linguistic transition between Sønderjysk and Standard Danish (Rigsdansk ) in the north and Schleswig's Low German and New High German in the south.

During the First World War , the Battle of Jutland or Skagerrakschlacht took place at the northern end of the peninsula . It was one of the greatest battles in naval war history. It was fought out between the Royal Navy and the Imperial German Navy and resulted in heavy losses on both sides.

In the Danish Jutland, the Schleswig-Holstein landscape continues to the north, with marshes on the North Sea coast in the west, a terminal moraine ridge ( Geest ) in the middle and loamy hill country, which consists of the ground moraines of the Ice Age , in the east. The coastal strips in the northeast half are comparatively young, as Jutland still rises 10 mm per year due to the postglacial land elevation along a diagonal and sinks in the southwest.

To the north of Esbjerg there is a compensation coast with high sand dunes in the west . The Limfjord cuts through Jutland in an east-west direction. The watershed of the Jutian high ridge runs through the middle of Jutland in a north-south direction , starting at Dollerup and continuing over the Hüttener Mountains to Holstein. The main traffic artery in north-south direction, the Ochsenweg (Danish: Hærvejen) , developed on it as early as the Stone Age .

The highest point in Jutland (and at 171.86 m above sea level also the highest point in Denmark ) is Møllehøj in close proximity to Ejer Bavnehøj and not far from Yding Skovhøj , all of which are located in the Ejer Bjerge ridge between Skanderborg and Horsens. The longest and longest river in Denmark is the Gudenå with a length of 173 km.

Jutland is geographically divided into not always precisely defined areas. Topographical conditions, differences between the Jutian dialects , the mentality of the population, economic structure and traditional administrative boundaries are all taken into account. The boundaries in north - center - south overlap with the division in west - east, so that regions can be assigned to two different directions depending on the perspective .

The division into West Jutland / Vestjylland and East Jutland / Østjylland roughly follows the Jutian ridge. It also roughly marks the dialect border between West and East Jutian. Historically, West Jutland was a region marked by poverty, but its agriculture was based on freelance farming , while the affluent eastern part was dominated by estate management and urban trade. For Jens Peter Trap the line Dollerup - Padborg was suggested as a demarcation .

When subdividing in north-south direction, the historical division into Norderjutland / Nørrejylland and Süderjutland / Sønderjylland along the Königsau must be taken into account. North Jutland now consists of North Jutland , Central Jutland and South Jutland .

The Danish municipalities formed in 2007 can be roughly assigned. Duplicate entries are possible in the overview table. Minor cardinal points always belong to both cardinal points. 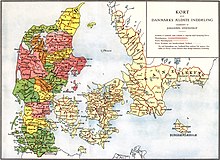 Harden in Denmark in the Middle Ages.
See also : Administrative division of Denmark

Jutland does not form a separate administrative unit. Since the municipal reform of 2007, it has included the Danish administrative regions Region Nordjylland , Region Midtjylland and most of the Region Syddanmark .

Jutland, however, forms a higher judicial district for which the Western Regional Court ( Vestre Landsret ) with its seat in Viborg is responsible. Until the electoral law was amended as a result of local government reform, the whole of Jutland formed one of three upper electoral districts, demarcating it from Hovedstaden ( Copenhagen and Frederiksberg ) and Øerne (the islands of Funen, Zealand, Lolland , Falster and others). The Danish Statistical Office maintains a double territorial subdivision, which means that statistical information can be accessed both under the administrative units (regions, municipalities) and under geographical aspects.

Historically, Jutland consisted of several Sysseln , which in turn were divided into several Harden . The offices were later introduced, so that several Harden formed one office.

The world-famous Lego company is based in Billund . Important economic sectors include tourism , especially on the North Sea coast, as well as fishing and food production. Important industrial and port cities such as Kolding , Horsens or Aarhus can be found particularly on the Baltic Sea or fjords. In Esbjerg , the fifth largest city in Denmark, is the most important North Sea port in the country with several times a week to Harwich trains running (Great Britain) car and passenger ferry.

In Jutland, alongside standard Danish, the Jutland dialects Vest-, Øst- and Sønderjysk are traditionally spoken, some of which are again divided into smaller sub-dialects. Sønderjysk was spoken up to a line between Husum and Eckernförde up to the 18th and 19th centuries (e.g. the Angel Danish ). After the language change to German, Sønderjysk can now only be found on the German side in places near the border.

In addition to its natural beauties, Jutland has countless testimonies to geological and early history. Megalithic systems , abandoned monasteries, museums, castles and mansions, hundreds of village churches from the 12th and 13th centuries are well worth a visit.

Between the German-Danish border and the Eider (in the Schleswig part of the country ) there are other sights, for example:

The main cities in Jutland

German cities within the scope of Jutian law