The title of this article is ambiguous. Further meanings are listed under Geest (disambiguation) . 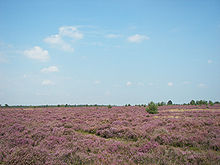 The Lüneburg Heath is a typical geest landscape.

The Geest refers to a geomorphological landform in northern Germany , Flanders , the Netherlands and Denmark , which was created by sand deposits during the Ice Ages and is in contrast to the post-glacial alluvial land, the marshland . Since the Geest represents a higher-lying landscape, it is sometimes also called Geest Ridge or Sand Ridge . The word itself is a noun from the Low German adjectives gest ("dry", "sterile") and güst ("sterile" in milk-producing animals). From this, geographical terms such as Vorgeest, Hohe Geest, Geestniederung, Geestplatte, Geestrand etc. are derived. The small-town Geestrandsiedlung is a special type of settlement . Typical village forms of the Geest are also the Eschdorf and the Heidesiedlung.

The list of major natural regions in Germany summarizes all former Geest and moor districts under the name of North German Geest. Within this area, the main units Dümmer-Geestniederung , Ems-Hunte-Geest , East Frisian-Oldenburgische Geest , Weser-Aller-Flachland , Stader Geest , Lüneburger Heide and Schleswig-Holsteinische Geest are distinguished, which in turn are divided into smaller units.

In the former Frisian areas the allusion Geest , Gast or Gaste can be found as a basic word in a number of place names such as Tergast , Holtgast , Jemgumgaste, Grotegast , Lutjegast , Rinsumageest , Oegstgeest , Poelgeest and Gaasterland . The arable land of the village was also often referred to as Garst or Gaste . Occasionally the word Geist (fem.) Is used, as in Geistviertel , Hohe Geist or Holzgeist.

In the west of the Netherlands (the provinces of North and South Holland ) geest is defined as the populated edge of the dune with its old arable soils. Otherwise, in the Geest regions of the Netherlands rather is sandy soil (sand and areas zandgebieden ) spoke to give again between Geschiebelehmplatten and quicksands levels differentiated. The formal division into main landscape types distinguishes between the northern, eastern, central and southern Geest districts. In the central Geest area, the landscape is characterized by an ice edge from the time of the Saale with sand , terminal and ground moraines . The basic word geest has only been passed down here in places in place names such as Geesteren , Geijsteren and Gasteren .

In Denmark, the terms Heidelandschaft ( Hedeegnen ) or Heidedörfer ( Hedebygder ) are often used, whereby - according to a design by Enrico Dalgas - between low heather plains ( Hedesletter or Talsandern , German: Vorgeest) and high Geestinseln ( Bakkeøer or Moräneinseln , German: Hohe Geest). The Geest Islands are built partly from boulder clay and partly from moraine sand. The terms Vorgeest and Hohe Geest are particularly common in neighboring Schleswig-Holstein.

Geest landscapes are generally higher than the marshland. They consist of terminal moraines , ground moraines from the hall ice age ( Hohe Geest ) or soft ice age sanders ( Niedere Geest ). This Altmoränenlandschaft was during the Eemian interglacial of flight sands and thereafter from Sandern the following Weichseleiszeit overprinted. Additional erosion created areas with less relief and less water. They are clearly related to the inland plates . Therefore, one often finds sandy , barren soil . Mainly potatoes are grown here . The forest cover consists mainly of pine trees . However, most of the trees were destroyed in the course of the settlement. Through constant biting of the young shoots by cattle, dwarf shrub communities ( heaths ) can arise. Ground and terminal moraine areas are more fertile than sand and are naturally covered with deciduous forest (especially beech ). Very sandy geest areas are much less fertile than the marshes or the moraine landscapes shaped by the Vistula Cold Age, for example in the eastern hill country in Schleswig-Holstein . This type of land is typical for large parts of Lower Saxony , Mecklenburg-Western Pomerania , Schleswig-Holstein and Hamburg .

Characteristic for many geest landscapes of the coastal countries are the Knicks , a north German special form of the wall hedge , which is cut back to the stock at regular intervals and offers protection from wind and sand drift . Knicks used to be used to extract willow rods and wood for fences and as fuel.

Where the Geest borders directly on the sea, steep coasts , so-called cliffs , form .

In the settlement history of Northern Germany, the Geest was settled earlier than the Marsch because it offered protection from storm surges . Therefore one can find large stone graves from the Stone Age both on the mainland and on the geest cores of the islands .

The Geest-Marsch border also represents a border in terms of settlement and cultural history. The Frisians preferred to settle in marshland areas. Even within the Saxon populated areas there was a separation of rural geest and marsh cultures, which was determined not least by the different fertility of the areas. Until well into the 20th century, it was considered improper for people living on the march to marry someone from the Geest, as this would not bring fertile land into the family .