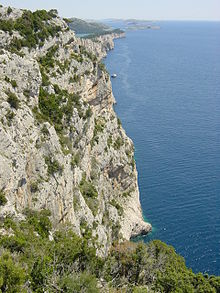 A cliff is a stretch of coast where there is no gradual transition from the sea to the mainland , but the sea meets the steeply towering mainland. The height of the mainland is well above sea ​​level . The counterpart to cliffs are flat coasts .

Most of the cliffs are cliff coasts (also abrasion coasts or erosion coasts), where erosion by the surf leads to a steep break in the coast and thus the cliff is moved inland. Other forms of formation of a steep coast are fjords , in which valleys abraded by glaciers due to the rise in sea level are now partially under water. In Norway , New Zealand or Alaska there are fjords with almost vertical walls more than 1000 m above and around 300 m under water.

In the case of volcanic islands , the sea can penetrate the caldera and the wall of the volcanic vent becomes a cliff. The most famous example is Santorini in the Cyclades archipelago , Greece. The main town Thira is located on the edge of the caldera, which is around 300 m high above water and continues under water for another 200 m.