This article looks at the sea as a body of water. For other meanings, see Sea (disambiguation) .

The sea ( Low German : the sea ) means the interconnected waters of the earth that surround the continents , also known as “the oceans ”. If this marine water mass is understood as a body of water, one speaks of the ocean.

The sea is a coherent, richly indented body of water that covers around 71% of the earth's surface. 31.7% of the world's oceans are 4000–5000 m deep. The deepest point with a depth of about 11,000 m is in the Mariana Trench , a deep sea channel in the Pacific . In contrast, shallow sea regions are mostly on the shelf (shallow seas, such as most of the North Sea ). The marine flora produces approximately 70% of the Earth's atmosphere existing oxygen .

Overall, the sea has a volume of 1.338 billion km³ and thus a share of 96.5% of the world's water resources. Because of its high salt content of around 3.5%, seawater is not directly suitable for use as drinking or irrigation water. Only 3.5% of the total water supply on earth is fresh water. The oceans are scientifically researched in the marine sciences, collectively called oceanography . 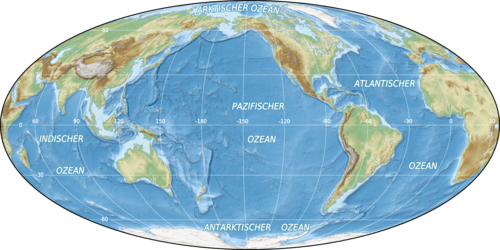 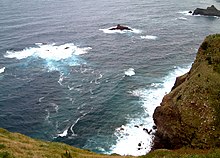 The Baltic Sea is a tributary of the Atlantic. Cape Arkona on the island of Ruegen , Western Pomerania .

By definition, the sea is the continuous body of water on earth. “Seas” which, like the Caspian Sea and the Dead Sea , are enclosed by land, are not to be defined as seas. They are considered inland waters, even if there was a geological connection to the sea. Lakes that are connected to the sea by rivers, like the rivers themselves, do not belong to the sea either.

Individual seas are usually subordinated or assigned to the five oceans . In the case of the seas, a rough distinction is made between marginal seas , which merge directly into the ocean, and inland seas , which are enclosed by land masses and only connected to one another by straits. The Mediterranean Sea , which, like the oceans, separate continents from one another, play a special role . The Mediterranean and oceans are referred to as the world's seas .

All seas are subject to tidal forces. The attraction of the moon creates ebb and flow - also called tide . The seabed exposed at low tide is called the tidal flats . However, the tidal range is different. In some regions this is up to 15 m, on the North Sea coast about 2 m, in the western Baltic Sea a maximum of 40 cm and in the eastern Baltic Sea and in the Mediterranean Sea it is hardly noticeable. The decisive factor for the height of the tidal range is not only the area of ​​a body of water, but also the possibility of the water flowing in and out.

Before the invention of the echo sounder , the sea ​​floor was imagined as a largely flat surface. It was later discovered that the sea floor is at least as mountainous as the surface of the earth. Under the surface of the water there are reefs , mountains , crevices, ditches and gullies. They divide lake basins and thresholds into different regions of a sea. The shifting of the earth plates ( tectonics ) leads to submarine volcanic eruptions and seaquakes .

Sea water is characterized by a relatively uniform salinity , which averages 3.5% ( Mediterranean 3.8%). It is increased where there is high evaporation and at the same time the exchange of water with other seas is low, which means that, in relative terms, the amount of water decreases while the salinity increases. In addition, it increases when there are only a few tributaries that dilute the sea with fresh water .

Due to the curvature of the earth , the maximum visibility for objects on the sea is limited. At an observer's eye level of 2 m above sea ​​level , the geometrically calculated distance to the nautical horizon is around 5 km; since the terrestrial refraction increases the visibility by an average of a tenth, the optical horizon is about 5.5 km away (see also geodetic visibility ).

Seas have always been one of the sources of food . Many people have lived on the coasts for thousands of years ; whole island peoples live from fishing in the sea. Seas continue to be of paramount importance for international traffic and trade. The maritime industries achieve a world market turnover of 1,200 billion euros per year with strongly increasing prospects.

Before the invention of the airplane transportation was by ship over the seas, the only way out of Europe to America or Australia to get. Most of the islands in the oceans, such as B. Madagascar , and archipelagos , such as. B. the Canary Islands , could only be reached by sea.

Since transport by air freight is many times more expensive than by ship, the transport of goods across the sea is still the first choice for bulk goods . In terms of weight, 92% of all goods in world trade - 5.7 billion tons annually - are transported by sea.

In the last few decades, ideas for generating electricity in the seas have been developed and implemented more and more in recent years. The use of wind energy in offshore wind farms is becoming increasingly widespread . There are also plans that ocean energy use more, such as tidal power , ocean current power plants , ocean thermal power plants , osmotic power plants in estuaries and wave power plants . In addition, sea water, like water from other bodies of water, can serve as a heat source for heat pumps . As of 2016, the largest heat pump system that uses seawater is located in Stockholm . It supplies a district heating network to which 2.1 million people are connected and has an output of around 420 MW .

The sea as an economic and living space not only has a strong impact on the people who work there (seafarers, fishermen) (see e.g. the sailor's language ), but also entire societies and states that are oriented towards sea ​​trade and shipping (e.g. Venice , Great Britain , see also Navalism ), deep down into customs and religion (see e.g. Poseidon , Christian Seafaring ).

Accordingly, there are special artistic and, above all, literary special forms, starting with special songs (cf. Shanty ) up to high-level literature (cf. Melville's novel Moby Dick ).

In the course of man-made global warming , the oceans are also warming up, and the increasing temperatures in them shift the habitats of the animal and plant species living in the water .

The increase in the CO 2 content in the air means that the sea absorbs more CO 2 from the earth's atmosphere . This dissolves in sea water with the formation of carbonic acid (H 2 CO 3 ). This acidification of the oceans worsens the conditions, especially for those marine animals that need lime to live (animals with lime shells or limestone skeletons such as hard corals ). B. the bio-mineralization of corals is hindered: Together with the warming of the oceans this leads to more and more coral bleaching . The existence of algae in the world's oceans has an opposite effect, the growth of which is promoted by CO 2 and which allows a considerable part of the metabolized CO 2 to sink to the ocean floor , where it is withdrawn from the biosphere's material cycle for a very long time by sedimentation . Another opposite effect arises with the simultaneous global warming from the fact that warmer water has a lower capacity for CO 2 than colder water.

The world's oceans also suffer from persistent overfishing as deep-sea fishing is not adequately limited by fishing quotas; Secondary pollution is " ghost nets ", fishing nets that are floating in the oceans, lost or "disposed of" , especially made of plastic ; Their decomposition contributes to the global pollution of the oceans with plastic waste . Ship accidents in turn lead to serious damage to the marine environment again and again because oils and fuels in particular stick together the plumage of seabirds and the gills of fish and thus usually cause them an agonizing death.

Dangers of the sea

The sea holds certain dangers in store for shipping traffic and for coastal states . So z. B. Shallows , reefs and cliffs , but also storm surges for ships are dangerous. Mudflat hikers and bathers should watch out for ebb and flow as well as strong currents . Coastal countries can be threatened by storm surges and spring tides . Seaquakes and meteorite strikes can trigger huge gravity waves called tsunamis . As a change in the chiming line, these are usually only noticeable near the coast, where they pile up.