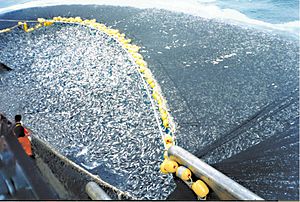 This catch alone with a purse seine net contains around 360,000 kg of fish

With overfishing is defined as the excessive depletion of fish stocks in waters by fishing . Overfishing is when more fish are caught in a body of water over the long term than regrow or migrate through natural reproduction . Overfishing is a kind of over-exploitation of natural resources.

The catch quotas of the common fisheries policy of the European Union formulate overfishing as a political goal. Paradoxically, this overfishing is not criticized by fishermen , they are calling for greater overfishing. Overfishing is therefore a typical example of a social dilemma in the sense of the tragedy of the commons .

Factory ships like the Wiesbaden are equipped for processing large catches (Kai in Cuxhaven , 2010)

Overfishing is the main cause of the massive decline in species stocks in marine and coastal ecosystems. Some fish species have become extinct , with many more it is to be feared.

In addition to overfishing, other human interventions such as microplastics , pollutant input (also through the absorption of carbon dioxide (CO 2 ) from the earth's atmosphere), overfertilization , depletion of mineral resources and anthropogenic global warming damage the marine ecosystems . Before human intervention, there were many more specimens of the affected fish species than there are today.

Paleoecological , archaeological and historical data show that there is a time lag of decades or even centuries from the beginning of overfishing to the inevitable dramatic changes in ecological communities . This is explained by the fact that non-fished species at the same trophic level (position in the food chain ) occupy the ecological niche of the overfished species - until they are overfished for their part or are decimated by epidemic diseases as a result of their overpopulation (caused by the disappearance of the competing species ) are.

Overfishing can also cause conflicts between developed and developing countries. This is how the Kenyan Andrew Mwangura, whose Seafarers Assistance Program brokered 90 percent of all captures between Somali pirates and shipowners in 2008 , named illegal fishing as the root of piracy. 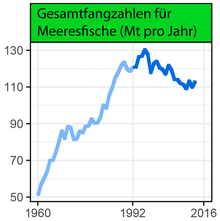 Development of fish catches according to "World Scientists' Warning to Humanity: A Second Notice" 2017

According to the two-year report (The state of World Fisheries and Aquaculture 2006) by the Food and Agriculture Organization of the United Nations (FAO) on fishing, 52% of marine fish stocks are so intensively fished that it is no longer possible to increase them. A quarter of all observed stocks are in a critical condition. This part is either overexploited (92 ± 1%), has fallen sharply (7%) or is slowly recovering (1%). Species that migrate between national territorial waters or are fished outside of these zones are particularly affected . These include more than half of the migratory shark species and two-thirds of the migratory ocean populations, such as cod , halibut , bluefin tuna , pomegranate and basking shark . The number of only moderately exploited fish stocks fell from 40% to 23% between the 1970s and 2006. According to the study, overfished seas are primarily the south-east Atlantic , the south-east Pacific , the north-east Atlantic (and thus the North Sea ) and the habitats of deep-sea tuna species in the Atlantic and the Indian Ocean . In these areas the proportion of overfished stocks is already 46–66%.

According to Greenpeace Switzerland (brochure "Let's stop the plunder of the seas", August 2009) the total catch has increased fivefold since 1950, and this without the illegal fishing activities. The remaining stock of blue whales is only 1.7%, that of tuna 10%. Therefore, according to Greenpeace, 40 percent of the seas must be protected and, above all, the existing fish population must be kept.

The EU fisheries policy sets quotas that exceed the scientific recommendations of the International Council for the Exploration of the Sea (ICES) by an average of 48% each year. As a result, 88% of the fish stocks in EU waters are now overfished, compared to just 10% in the 1970s.

In many traditional societies, overfishing has been avoided by common land or taboo rules, which is why the yields were higher than today. There are currently no effective measures against overfishing in the world; Supranational fisheries agreements, selective fishing , the establishment of marine protected areas and fishery protection zones with which free and unhindered fishing are temporarily or permanently restricted or fixed by catch quotas , all do not meet the scientific recommendations. The definition of minimum mesh widths for the nets only slowed down overfishing, but could not reduce it.

Advice from environmental organizations such as Greenpeace or the WWF and environmental labels on products such as that of the MSC (Marine Stewardship Council) , the Friend of the Sea (FOS) label, the fair-fish label for animal-friendly, sustainable and fairly paid fishing or The SAFE program for dolphin-safe caught tuna , launched by the US Earth Island Institute , is trying to make consumers aware of the problem.