The paleoecology or palaeoecology is the study of the fossil habitats and their communities , so consider the ecosystems of the geological past. 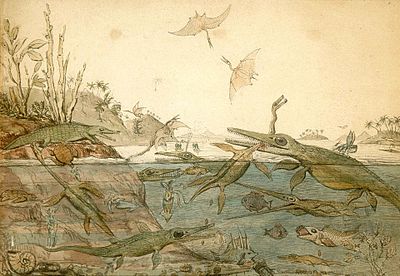 The watercolor Duria Antiquior ("Prehistoric Dorset"), painted by Henry Thomas de la Beche in 1830, depicting the Lias Sea of Dorset in southern England is the earliest known attempt at reconstructing a prehistoric habitat with its fossilized life

The subject is usually not an academic discipline in its own right , but is integrated into neighboring sciences such as geography , palaeontology , archaeobotany or archeology .

Paleoecology is about shedding light on the relationship between the environment, climate and human influences, using past environmental and climatic changes. Paleoecology tries to answer the question of how the environment has evolved and how the present-day environment came into being in the course of these developments.

Long-term observation of the interactions between climate and environment is essential. From this, conclusions can be drawn about the laws of such interactions that are relevant for the assessment of future climate and vegetation developments. The distinction between natural and human influences on the history of the landscape is important for the question of nature conservation.

Paleoecology thus not only satisfies scientific curiosity in general, but is also relevant for the prediction and assessment of future vegetation, climate and landscape developments.

Since the climate and vegetation of the past are not directly accessible or in reliable records, paleoecology has to look for “natural archives” in which traces of previous vegetation and climate changes can be found. Examples of such natural archives are deposits in lakes and moors, but also the glacial ice in Greenland.

Using the example of lake sediments, one can see what kind of deposits can be found in a lake: abiotic input (erosion); biotic terrestrial input (pollen, insects ...); biotic aquatic input (algae, crabs, foraminifera ...).

The analysis of piles of garbage (English: pack rat midden) of the American bush rats is of great importance for the investigation of the environmental and climate development in the desert regions of the southwest of the USA and Mexico during the last 40,000 years . 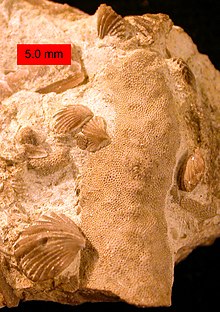 Paleoecologists examine marine and / or freshwater sediments from drill cores or geological outcrops. The working method is shown here using the example of research into pollen deposits ( palynology ).

In order to analyze the drill cores, a small amount is taken out at certain intervals and the material is cleaned in several steps according to a specific procedure. Aggressive acids and bases are used because the pollen is resistant to them, while the remaining deposits can be largely dissolved.

The deposit cleaned in this way is then examined under the microscope. The pollen are identified, i.e. H. assigned to a certain plant species and counted. The frequency of certain types of pollen is recorded in pollen diagrams. Plant pollen is of course only part of what can be found in the deposits and that can provide information about the environment at that time. Macro residues (pieces of tree bark, etc.) are important in order to be able to judge whether the pollen really comes from the near vicinity of the lake or whether it was carried by the wind from far away. Other researchers concentrate on other botanical, zoological or physical indicators that can be found in the drill cores and that allow conclusions to be drawn about the environment (e.g. diatoms, cladoceros, chironomids, volcanic ash, sediment grain sizes, etc.)

There are two basic ways of dating the deposits:

These two reference systems do not completely agree. Today, the C14 data are calibrated , mainly through tree ring counts, to such an extent that the absolute solar years can be derived from them with a certain spread.

The ice cores from Greenland serve as a long-term temperature archive. Based on the oxygen isotopes in the ice and the dust content, conclusions can be drawn about the temperature development. Therefore, paleoecology today has a curve of the long-term development of the average temperature. This curve is considered very reliable and serves as a reference curve into which paleoecologists fit their own data collections. The reference curve is therefore a dating aid.

In order to be able to interpret the traces of the past in a meaningful way, paleoecology must take into account that the plant remains (pollen and macro remains) that have been preserved can only be regarded as representative of the vegetation of that time to a limited extent because

The pollen diagrams provide information about the changes in vegetation over time. Interpretation is about finding reasons for these changes. The climate comes into question, of course, but also the interplay of different plant species, the influence of humans and more.

When interpreting it, it should be noted that many developments take a time lag: After a climate change, the plants need time to migrate and to establish themselves in new places.

Paleoecology shows very nicely that we are dealing with a network of knowledge whose individual parts have to fit together. Attempts are made to combine pollen, macro residues, insects, C14 dating, independent climatic data from oxygen isotopes, etc. into a uniform picture. The more you already know about a time or region from other sources, the more secure and detailed the conclusions you can draw from your own data.