The term Ordovician was introduced in 1879 by the British geologist Charles Lapworth . He derived it from the Ordovicern , a Celtic tribe that was resident in Wales . In the 19th century, today's Ordovician was mostly assigned to the Silurian as a lower unit. In order to settle a dispute between the followers of Adam Sedgwick , the discoverer of the Cambrian , and Roderick Murchison , the descriptor of the Silurian, Charles Lapworth introduced the term Ordovician in 1879 for the strata that were both claimed for their respective systems. He had recognized that these strata differed quite significantly from the other two systems, also in terms of their fossils . But the new system designation between Cambrian and Silurian was slow to gain acceptance and was only recognized worldwide by the International Geological Congress in 1960.

Subdivision of the Ordovician

Life in the Ordovician, diorama in the National Museum of Natural History

In contrast to this, the following regional series and levels were used for the Ordovician in England:

In the older German-language literature, the British series were used as stages:

Above all in the older German-language specialist literature of the 19th century, the Ordovician is also referred to as a lower silure (see history). This can lead to confusion and incorrect timing.

As in the Cambrian , the paleogeographical situation of the continents was shaped by the large continent Gondwana and three other smaller continents Laurentia , Baltica and Sibiria as well as a whole series of small and micro continents that were originally part of Gondwana. Baltica and Gondwana moved a little further apart during the Ordovician, with the Tornquist Ocean in between . Laurentia drifted north to the equator. It was separated from Gondwana and Baltica by the Iapetus Ocean . Siberia was already on the equator in the Middle Ordovician.

In relation to today's continents, the South Pole migrated from a position in what is now southern Algeria (Lower Ordovician) a little to the north to around today's Mediterranean coast of Algeria (Central Ordovician), and then migrated to the Upper Ordovician to West Africa; To put it more correctly, Gondwana migrated accordingly across the South Pole. The North Pole lay in the then global Panthalassic Ocean.

In the Lower Ordovician , the microcontinent Avalonia broke off the northern edge of Gondwana and drifted north. The Rhine Ocean opened up between Avalonia and Gondwana . Avalonia formed its own fauna province in the Middle Ordovician, which differed from that of Gondwana, Baltica and Laurentia. In the Upper Ordovician, Avalonia was welded to Baltica with the closure of the Tornquist Ocean and the differences in fauna between Baltica and Avalonia disappeared. The Iapetus Ocean began to close between Laurentia and Baltica. Probably also in the Lower Ordovician , the microcontinent Perunica broke off from Gondwana and was also drifting north towards Baltica.

In the Upper Ordovician, with a focus on the Hirnantium, a large part of Gondwana (Saudi Arabia, North Africa, South America) was frozen. Tillites were deposited on the affected continents . The direction of transport of the ice can be reconstructed through glacier scratches in the rock. In the adjacent marine areas there were deposits of sediments with dropstones . Dropstones are formed when coarse debris frozen in icebergs falls into mostly fine-grained sediments as the icebergs melt. The debris was picked up from the subsurface by inland glaciers and transported to the coast. There, large parts broke off again and again and drifted as icebergs on the adjacent seas. The microcontinents of the Armorica group (as part of the Hun superterran ), which later become important for Europe, were still on the northern edge of Gondwana.

Initially, the atmospheric carbon dioxide concentration in the Ordovician was between 4000 and 5000 ppm, and - similar to the previous Cambrian - the climate was warm or at least very mild up to higher latitudes. Thus, from the Lower Ordovician and over large parts of the Middle Ordovician, no ice cover of the land masses located near the South Pole is known. This changed with the beginning of the Ordovician Ice Age (also brain-antic Ice Age or Andean-Sahara Ice Age ) around 460 million years ago, during which large areas of the southern hemisphere glaciated. The cold phase reached its climax during the last Ordovician stage of the brain antium and ended in the Silurian 430 million years ago. The drift of the greater continent Gondwana over the South Pole could be reconstructed in chronological order using glacial deposits . The center of the glaciation lay on the Arabian plate 450 to 440 million years ago , then reached today's Sahara, then migrated westward via the then continuous land connection towards South America (Brazil and the lower Amazon region) and expanded in a somewhat weaker form 430 million years ago on the region of the Andean chain, which at that time did not yet exist .

Possible reasons for the gradual onset of global cooling are the continental cover of the South Pole, the rapid lowering of the sea level and a possibly greater fluctuation range of the Earth's orbit parameters . In addition to the shorter day length of 21.5 hours, which, according to model simulations, also represented a cooling factor under the circumstances at that time, the solar radiation that has been reduced by 4.5 percent compared to the present must be taken into account (solar constant in the Ordovician 1306 W / m², currently 1367 W / m²). Moss- and lichen-like plants probably exerted a significant influence, which, according to more recent findings , began to colonize the mainland as early as the Middle Cambrian and spread further in the Ordovician . The vegetation cover withdrew elements such as calcium , magnesium , phosphorus and iron to a large extent from the soils . This process accelerated the chemical weathering and led to the increased binding of atmospheric carbon dioxide and an associated global cooling of approx. 4 to 5 degrees.

A study published in 2019, which is based, among other things, on the detection of extraterrestrial helium-3 ( 3 He) in Ordovician sediment layers, assumes that an asteroid circling between Mars and Jupiter with a size of around 150 km passed about 466 million years ago a collision with another celestial body was completely destroyed. According to this hypothesis, the resulting interplanetary dust was distributed in the inner solar system and dampened the solar radiation on earth, with the consequence of falling temperatures worldwide over a period of approximately two million years. From an evolutionary point of view, the slow change from a warm climate to a cold phase could have given the impetus to the emergence of new species and an increase in biodiversity in the oceanic biotopes . The core phase of the Ordovician Cold Age began 20 million years after the cosmic collision: A rapidly occurring cold snap, probably triggered by the crossing of a tipping point in the climate system and associated with the strong expansion of sea ​​ice surfaces and continental ice sheets , occurred during the last Ordovician stage of the cerebrum (445 , 2 to 443.4 mya), whereby the surface temperature of equatorial oceans decreased by 8 ° C and the global mean temperature sank to 11 to 13 ° C.

During this period, not only did the glacier levels reach a maximum, but one of the most momentous mass extinctions in the history of the earth also occurred . The estimates of the extinction rate of the affected species vary considerably and amount to up to 85 percent. There is broad scientific consensus that the multiple episodes of the biological crisis towards the end of the Ordovician are due to a combination of factors, including, presumably, severe volcanism. Its outgassing in the form of sulfur dioxide and nitrogen oxides could have seriously damaged the oceanic biotopes. This assumption is supported by the occurrence of several oceanic anoxic events which additionally destabilized the marine habitats during the Hirnantium and in the early Silurian . In this context, recent studies postulate profound geochemical changes in the course of which toxic heavy metals (arsenic, lead and manganese) were released on the seabed, while at the same time vital trace elements such as selenium were reduced .

On several occasions, an extraterrestrial cause in the form of a gamma-ray burst has been suggested for the mass extinction . Although the rapid decimation of the organisms that inhabit the upper sea zones agrees with the radiation hypothesis, there is no further factual evidence. For gamma-ray bursts and possible supernovae, it is equally true that a detection of cosmic radiation influences in Paleozoic rock formations is not possible with the currently used instruments. 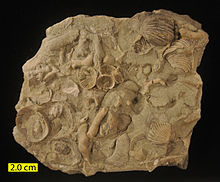 By the end of the Cambrian, there had been widespread regression and many species were extinct. These included some of the early specimens of the arthropods such as the Anomalocarida ( Anomalocaris ).

In the Lower Ordovician, however, there was renewed radiation . The corals appear for the first time with the two groups of Rugosa and Tabulata . The graptolites make their first appearance at the beginning of the Ordovician. As the last of the great tribes of the animal kingdom also appear bryozoans (Bryozoa), and the use is already in a diversity. The armpods already present in the Cambrian undergo a great deal of radiation; very many groups appear for the first time. In the Ordovician, the actual radiation of the cephalopods , which had already emerged with simple forms in the upper Cambrian, began. They become the largest predators of the Ordovician, with case lengths of up to 10 m and more (for example Ord. Endocerida ). In the group of echinoderms (Echinodermata) which come urchins (Echinoidea), the sea cucumbers (Holothuroidea), the starfish (Asteroidea) and brittle stars (Ophiuroidea) the first time. The rapid radiation of sea ​​lilies (Crinoida) should also be emphasized. The strange group of carpoidea appears for the first time. The trilobites are diversifying; among them are nectonic forms with large, highly developed compound eyes, but also (secondary) blind forms that probably inhabited deeper water. The Pteraspidomorphi developed among the jawless vertebrate relatives ( Agnatha ) . The conodonts also developed very quickly. After the archaeocyathids became extinct , corals , bryozoa and stromatopores formed reefs for the first time .

Over 100 families of marine organisms were affected by the mass extinction at the end of the Ordovician . The biostratigraphic zoning is based mainly on graptolites , trilobites , conodonts and brachiopods .

Green algae were common in the Upper Cambrian and Ordovician. Presumably, the first simple land plants in the form of non- vascular mosses, similar to today's liverworts , emerged from this in the Ordovician (according to recent research already in the Cambrian) . Spores from these first land plants were found in the uppermost Ordovician sediments.

It is believed that arbuscular mycorrhizal fungi were among the first land-dwelling fungi and that they played an essential role in plant colonization by entering into a symbiosis with the plants and making mineral nutrients available to them. Such 460 million year old fossilized hyphae and spores have been found in Wisconsin .

Central Europe in the Ordovician 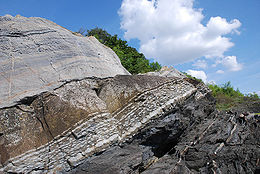 Unlocked hanging slope of the Ordovician on the southern tip of the island of Hovedøya in Norway. During the unfolding of the Caledonids , the normal sequence of layers was reversed and the light Ordovician limestone (older) lies here over the dark Silurian claystone (younger).

Large parts of the land masses were flooded by temporary high sea levels and shallow marine sediments were deposited . Limescale deposits are characteristic of the Ordovician , including in large parts of what is now Scandinavia (e.g. Sweden ) and the Baltic region (e.g. Estonia ). In many areas, bed rocks of oil and natural gas, such as the Estonian kukersite, have been deposited . In Germany there are mainly clay deposits ( slate ) from the Ordovician. Especially in Thuringia , these sedimentary rocks also contain fossils. Leather slate is a specialty among them. It contains clasts (often quartzite ), interpreted as dropstones , which contain fossils , while the surrounding slate is at least considered to be low in fossils . They are important evidence of the Armorica group of small continents, which at that time was still near the South Pole , which later merged with Baltica and which today form the subsurface of Central Europe.