Ice edge of the Antarctic ice sheet on Mather Island in Prydz Bay . Sediment layers are trapped in the ice, with moraine material deposited in front of it .

An ice sheet or inland ice is an extensive glacier covering solid land with an area of ​​more than 50,000 km² (smaller, similarly shaped glaciers are called ice caps ). The ice sheet almost completely buries the existing relief under itself. The movement of the ice is also only marginally influenced by it.

Only the ice sheets of Antarctica and Greenland currently exist on earth . During the ice ages, as in, Last Glacial Maximum (LGM) before about 21,000 years ago, also covered the Laurentide and Cordilleran ice sheet large parts of North America , the Fennoscandian ice sheet (also called Scandinavian ice sheet called) Northern Europe , the adjacent Barents-Kara Ice Sheet Parts North Asia , as well as the Patagonian Ice Sheet in southern South America . The existence of an Ice Age Tibetan ice sheet is controversial.

Although the surface of an ice sheet is cold, the ice base is generally warmer and in some places reaches the pressure melting point . The melt water then generated can act like a lubricating film and greatly accelerate the movement of the ice. This allows fast-flowing channels to form in the ice sheet, known as ice streams .

Today's ice sheets are geologically relatively young. The Antarctic ice sheet was initially formed from ice caps in the early Oligocene , which repeatedly expanded and retreated until almost the entire Antarctic was covered by ice from the Pliocene . The Greenland Ice Sheet did not form until the late Pliocene, along with the first continental glaciation (Ice Age). Since this happened relatively quickly, fossils of plants that previously grew there were much better preserved than those of the gradually formed Antarctic ice sheet. 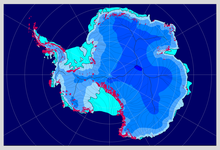 During the Ice Age warm periods , the Antarctic ice sheet had an extent comparable to that of today. Different shades of blue: ice sheet with different thicknesses , turquoise: ice shelf , red: ice-free areas

The Antarctic ice sheet is the largest single mass of ice on earth. It covers an area of ​​about 14 million km² and contains 30 million km³ of ice, which corresponds to about 90 percent of the total freshwater population on the earth's surface. If it melts completely, this would result in a global rise in sea level of around 61.1 meters. In East Antarctica , the ice sheet rests on a large land mass, whereas the underground of the West Antarctic ice sheet is up to 2500 m below sea level. Without the presence of the ice there would be an ocean floor; one therefore speaks of a marine ice sheet .

The Antarctic ice sheet is almost entirely surrounded by ice shelves that are fed by the ice streams and outlet glaciers of the ice sheet. The largest ice shelves are the Ross Ice Shelf , the Filchner-Rønne Ice Shelf and the Amery Ice Shelf .

Recent research has found bacteria in a subterranean lake under the Antarctic ice sheet that manage without oxygen and light.

The Greenland Ice Sheet covers 1.7 million km², about 82 percent of the land area of ​​Greenland, has a volume of 2.85 million km³ and, if completely melted, would cause a global sea level rise of about 7.2 meters.

Ice breaking on the inland ice near Kangerlussuaq

Due to global warming , an increase in ice volume is forecast for the Antarctic ice sheet during the 21st century. The reason for this is that the warming in the very cold Antarctica cannot cause any appreciable increase in ice melting, but the amount of snowfall increases. The warmer Greenland Ice Sheet, on the other hand, will likely lose significant volume due to melting. It is possible that the two effects roughly compensate for each other. Recent data show that ice sheet losses in Greenland and Antarctica between 1993 and 2003 most likely contributed to sea level rise. Between 2011 and 2014, a total of 503 ± 103 km³ of ice was lost in the Arctic and Antarctic; In Greenland, ice loss has increased two-and-a-half-fold compared to the same period 2003–2009 and has tripled in West Antarctica. However, the exact dynamics of these processes is not yet understood and is the subject of further research. Another study says that the additional water mass causes the sea floor to sink, which means that the net rise in sea level is less.