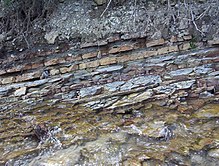 In the geoscientific sense, sediments are various organic and / or mineral (inorganic) loose materials which - not infrequently after a shorter or longer transport by gravity or a flowing medium - are deposited (accumulate) on dry land or at the bottom of a body of water . Sedimentary rocks , deposit rocks or strata are more or less solid rocks that have emerged from such sediments through diagenesis over the course of geological time . Sediments and sedimentary rocks are divided into clastic , biogenic and chemical sediments .

Sedimentary rocks emerge from loose sediments through diagenesis . The increase in the lithostatic pressure as a result of the further overlaying with sediment as the sedimentation progresses leads to drainage and compression of the older, underlying sediment layers. It is not uncommon for a cement to precipitate from the remaining pore water in the further course of the diagenesis , which ultimately leads to the conversion of the compacted sediment into solid rock . The precipitated substance can be mobilized in the sediment itself (e.g. by pressure release on the contact surfaces of mineral grains) or it can have been brought in from a neighboring sediment. A special case of diagenesis is coalification , in which, as a result of the increase in pressure and temperature, volatile components of a predominantly organic sediment are deposited, as a result of which the non-volatile carbon remaining in the sediment is passively enriched.

Sediments are stratified . A layer surface, the interface between two superimposed layers, is synonymous with the former sediment surface, which, depending on the depository, could have been the surface of the earth, the seabed or the bottom of a river or lake. Stratification can also arise afterwards during diagenesis .

One speaks of a sequence of layers when the resulting outcrop profile reveals several different rocks in their natural storage. (Compare also the banding of metamorphic rock .)

Sedimentary rocks are the only rocks that can contain fossils . Sedimentary rocks were also not exposed to high pressure or high temperature during their entire geological history (otherwise, depending on the degree of exposure and the associated change in the rock, one speaks of metasediments or orthogneiss ).

The sediment-forming processes are influenced by the effects of the earth's atmosphere , the hydrosphere and the biosphere on the surface of the solid earth. The sediment is shaped by the conditions under which it was formed. All environmental conditions that cause or influence the formation of a sediment are summarized under the term milieu , and the resulting sediment properties (including grain size, grain minerals, color, fossil content) are referred to as sedimentary facies . Milieu and facies are characteristic of different sedimentation areas and in practice the term facies is often equated with a specific deposit area (e.g. deep sea facies or fluvial facies).

In sedimentology there are various ways of categorizing sediments or sedimentary rocks.

According to the deposition environment or mechanism

According to the origin

Clastic sedimentites (from the Greek κλαστός klastós “broken into pieces”), detritic sedimentites or rubble rocks are sedimentary rocks whose material mainly comes from the mechanical destruction of other rocks. In principle, it is irrelevant to which rock class ( magmatites , sedimentites, metamorphic rocks ) these parent rocks belonged. The geographical region in which the parent rocks are suspected or in which they are still detectable today is called the delivery area .

Various names are used for the fragments of the clastic sediments. If they are smaller than 0.002 mm, they are referred to as particles . Particles are so small that they cannot have arisen from the mechanical destruction of solid rock. Instead, they arise through the chemical conversion of certain minerals (e.g. feldspars and mica ) into clay minerals or through the erosion of unconsolidated material that was already present in particle size.

If the fragments are larger than 0.002 mm, they are summarized under the generic term clasts or grains . However, the term “clast” in sediment petrography is often only used for larger, macroscopically clearly recognizable fragments in an otherwise rather fine-grained sedimentary rock (although not every rock containing such clasts has to be a clastic sediment). Particularly large clasts or grains are called pebbles if they are at least slightly rounded and fragments if they show no signs of rounding. The total amount of grains of a certain grain size in a rock is called a fraction . The grain fractions that dominate the sediment or sedimentary rock are named, for example as gravel or conglomerate , sand or sandstone, or clay or mudstone (see →  Classification according to grain size ).

The mineral grains and rock fragments that make up the clastic sedimentary rocks hold together with the help of a primary or secondary binder.

Depending on which minerals the grains and rock fragments of a clastic sedimentary rock consist of, different groups and subgroups can be distinguished. For example

Chemical sediments arise from the precipitation of dissolved substances from oversaturated solutions. By evaporation z. B. the evaporites ( sulfates , such as gypsum or anhydrite , and halides , such as halite or potassium salts ). The Zechstein series in Central Europe is an example of a sequence with mighty evaporite stores. Also carbonates may arise that way. But they are not part of the evaporites.

Another possibility for the precipitation of carbonates is to increase the water temperature (in contrast to e.g. halite, carbonate dissolves better in cold than in warm water). In this way, spring limes form in areas with a relatively high proportion of limestone in the subsoil (see also → Karst ).

The precipitation of carbonates can also take place indirectly through living beings. Algae carry out photosynthesis and remove carbon dioxide from the water . As a result, carbon dioxide is split off from the hydrogen carbonate ions contained in the water , whereupon the latter usually with calcium ions according to the reaction equation

In this sediment core from the South Atlantic, dark and light areas alternate, caused by fluctuations in the content of calcareous shells of planktonic foraminifera . The color changes and material differences reflect the Quaternary climate cycles .

Biogenic sediments are formed by the activities of living organisms as well as from the remains of dead organisms. This includes the active excretion of mineral substances (usually carbonate or phosphate skeletons), which can accumulate to form more or less thick sediment packages, such as reef limestone , mud mounds or bone beds . The massive limestone deposits of the Cretaceous period often consist largely of extremely small calcium carbonate skeletons of algae (→  nannoplankton ). Even non-mineral residues of dead organisms can form larger sediment bodies, e.g. B. peat or coal , which arise from the accumulation and transformation of dead plant remains.

Residue rocks or Residualgesteine are no sedimentary rocks in the true sense. They arise through chemical weathering and represent the remainder of the parent rock , which is chemically stable under the prevailing conditions. Typical residual rocks are gypsum cap (e.g. Central Europe) and saprolite (tropics). Secondary precipitation of oxidic iron, aluminum or silicon compounds from aqueous weathering solutions in the pore space of residual rocks and soils are sometimes regarded as chemical sediments. However, since they are related to immediately preceding chemical weathering processes, they are better to address as soil formations (see also →  Duricrust ).

According to grain sizes

The following names for the sedimentary rocks that emerged from loose sediments are also largely based on the prevailing grain size:

Another, but more neutral, classification based on the grain size distinguishes lutite (smaller than 2 µm), siltite (between 2 µm and 0.063 mm), arenite (between 0.063 and 2 mm) and rudite (larger than 2 mm). It is used with the addition of "limestone" in the classification of (clastic) carbonate rocks.

Many sedimentary rocks are used economically (e.g. limestone in the construction industry). In certain sediments can oil and natural gas produced ( petroleum source rock ), which then in a petroleum storage rock emigrate ( migrate ) to. Hard coal and lignite are also sedimentary rocks of great (albeit dwindling) economic importance.

Sedimentary rocks (especially limestone and dolomite ) can contain large amounts of carbonate , which requires carbon dioxide to form . Compared to the atmospheres of Venus or Mars , for example , where these sediments do not or hardly occur, the proportion of carbon dioxide in the earth's atmosphere is extremely low.

The study of sedimentary rocks enables, among other things, the structures, minerals and fossils they contain to reconstruct habitats that existed before geological times.