Sulphate ion in the classical notation

The salts of the dibasic acid sulfuric acid (H 2 SO 4 ) can be divided into sulfates and hydrogen sulfates (also known as primary and secondary sulfates ). For monovalent cations M I , the sum formulas M I HSO 4 and M I 2 SO 4 apply :

Alums are double salts of monovalent and trivalent cations with the general formula M I M III (SO 4 ) 2 · 12 H 2 O, the main representative of the group of alums is potassium aluminum sulfate (potassium alum). Vitriols, on the other hand, are the sulfates of bivalent subgroup metals containing water of crystallization ( copper vitriol , iron vitriol, etc.).

The surfactant sodium lauryl sulfate is used as a foaming agent in shampoos.

Sulfuric acid esters are sometimes also referred to as sulfates , as the names often end with -sulfate. Simple esters like dimethyl sulfate are powerful alkylating agents. Esters with longer hydrocarbon residues and sulfonic acid salts are usually surfactants . These esters also include the fatty alcohol sulfates , which are important in terms of application .

The alkali and alkaline earth sulfates in particular are extremely thermally stable. Sulphates of trivalent metal cations decompose in the heat to the corresponding oxides and sulfur trioxide :

Hydrogen sulfates are known as salts of the alkali metals . They are soluble in water. When these salts are heated, disulphates , salts of disulphuric acid, are formed .

Sulfuric acid is a strong biprotonic acid. In a one-molar, aqueous solution of the acid there are almost no H 2 SO 4 molecules, but essentially HSO 4 - ions. Only about 1% of the HSO 4 - ions deprotonate to SO 4 2− . The hydrogen sulfate anion (HSO 4 - ) can act as both an acid and a base , so it is amphoteric . The pK S value of the hydrogen sulfate ion is 1.89.

If a hydrogen sulfate salt is dissolved in water, a mixture of hydrogen sulfate and sulfate ions is formed in an equilibrium reaction. Therefore, one can hydrogen sulphates as a medium strong acid used, the acid strength is considerably higher than that of acetic acid (pK S = 4.76). Due to these properties, hydrogen sulfates can also be used in buffer solutions . The buffer area is in the strongly acidic area. Because of their acidic reaction in water, they are used in toilet cleaners , for example .

Stalactites in "Märchendom" the hall Feengrotten (a former alum shale mine), consisting of the rare sulfate mineral Diadochite . The diadochite is formed by the oxidation of the sulfide minerals contained in the black slate ( mainly pyrite ).

Many metal sulfates occur naturally in the form of minerals. By far the most common is calcium sulfate (CaSO 4 ), which occurs in several mineral varieties . With water of crystallization , it is called gypsum (CaSO 4  · 2 H 2 O) or bassanite (CaSO 4  · ½ H 2 O), without anhydrite . The pure white and extremely fine-grained plaster variant is called alabaster , transparent plaster monocrystals form the Marienglas . The most important gypsum and anhydrite deposits in Central Europe are located in the so-called Zechstein series , mostly deep underground in northern and central Germany and Poland. At the edges of the Variscan mountain range, the Zechstein anhydrites sometimes reach the surface of the earth, where they are mined in quarries. A world-famous deposit of gypsum is located in Mexico in the caves opened up by the Naica mine . Other important sulfate minerals are barite (barite, BaSO 4 ), Celestine ( SrSO 4 ) and Anglesite ( PbSO 4 ).

A biological source of sulfates is the conversion of sulfides and sulfur-containing biomass components (e.g. proteins ) by sulfur-oxidizing bacteria .

Sulphates occur in different amounts in groundwater . For drinking water obtained from it, a limit value of 250 mg / l applies in Germany according to No. 17 of Annex 3 (to § 7 and § 14 paragraph 3) of the Drinking Water Ordinance.

The sulfate ion has a tetrahedral structure, the SO bonds are all equivalent and of the same length. The bond relationships can be described either by mesomeric boundary structures with delocalized π bonds and two negatively charged oxygen atoms or by charge separation with a doubly positively charged sulfur atom and a negative charge on each oxygen atom. It is isoelectronic with the perchlorination . The molecular orbital diagram shows how the bond and hypervalence can be explained. A doubly positively charged sulfur atom with four singly occupied atomic orbitals is assumed. These orbitals are combined with four singly occupied 2p orbitals from the singly negatively charged oxygen atoms. Four bonding and four antibonding σ-orbitals are created, of which only the bonding ones are completely filled, and thus the tetrahedral molecular structure with four localized single bonds. The unoccupied antibonding σ p * orbitals are then combined with a fully occupied p orbital each of three oxygen atoms, resulting in three binding and three antibonding π orbitals, of which only the binding orbitals are occupied. This results in three π bonds that are delocalized over the entire molecule, i.e. over the sulfur atom and all four oxygen atoms.

The acid is added to suppress interference, as other anions such as carbonate or sulfite with barium also form salts that are sparingly soluble in water, but that are soluble in acids. 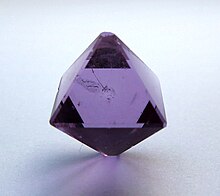 Synthetic chrome-alum single crystal in the shape of an octahedron. Side view of the triangular surfaces. Rhombic dodecahedron surfaces are indicated along the edges of the octahedron. 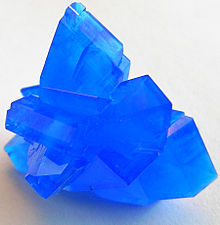