This article deals with the material alabaster, further meanings under alabaster (disambiguation)

Barbarossa cave , deposits with alabaster eye at the Grottensee

The alabaster is a very common, microcrystalline variety of mineral gypsum . From a chemical point of view, alabaster is a water-containing calcium sulfate with the chemical composition Ca [SO 4 ] · 2H 2 O.

Alabaster is visually similar to marble , but in contrast to marble it is a poor conductor of heat and therefore feels warm. Another difference is its lower weather resistance , which means that it would quickly decompose and become unsightly due to the weather . Alabaster is therefore used in sculpture exclusively for interior objects. Its color can be white, light yellow, reddish, brown or gray, depending on where it was found.

A variety of calcite with an appearance similar to the gypsum-based variety is called Egyptian alabaster . In contrast to gypsum-alabaster, however, this is water-insoluble and harder. It is sinter of lime ( onyx marble ). The term "Egyptian Alabaster" for the processed lime sinter from the Wadi Sannur and the Bosra Wadi has persisted in archeology.

Relief of the Nativity from English alabaster, around 1400, Nottingham

The region between Minia and Assiut was named by the Egyptians in the Ptolemaic period with the tricky name Alabastrites . The decorative stone obtained there, petrographically a lime sinter and today also known as onyx marble, was given this word to name it after its origin. Rosemarie Klemm and Dietrich Klemm assume that the Romans transferred this term to the gypsum rock from the area around Volterra because of similar optical properties .

Other theories have been discussed for the origin or derivation of the word alabaster: It is assumed that the term alabaster goes back to the Upper Egyptian city of Alabastron Polis , near the great alabaster quarries of Hatnub . Another interpretation says that the term is derived from "ana (r)" and the name "bast (et)", which means something like "stone of the goddess Bastet ". According to mythical lore, she was the owner of make-up vessels made of alabaster. Other assumptions are that it originated from the word ἄλαβα alaba ( Greek for "without handle"). In a figurative sense, the term "alabaster skin " describes a very light, even skin with a velvety sheen. In the Baroque era , this "alabaster-colored" skin was considered the ideal of beauty for noble women.

In late medieval England, extensive deposits of alabaster were discovered in the Midlands, near Tutbury, Staffordshire, and a little later in Chellaston, Derbyshire. This led to a wide production of tombs, altar panels, statues and statuettes. The manufacture of the devotional objects was suspected in workshops in Nottingham. However, recent research has shown that the alabaster objects were created in the vicinity of the quarries, because the raw material consisted of large blocks that had to be processed on site. The costly overland transport of the material to Nottingham would have made the production of the objects unnecessarily expensive, especially since the River Trent , which flows near the quarries towards Nottingham, was not yet navigable in the Middle Ages. The "School of Nottingham", to which the English alabaster production is wrongly attributed to this day, is a legend that the art historian John Hope claimed in 1907 because there was once evidence of a sculptor for alabaster there around 1370, but none afterwards.

The medieval English devotional objects made of alabaster have been preserved mainly in France in the regions that were owned by the English in the Middle Ages, in Aquitaine, Normandy and Brittany. In England itself, the works were completely destroyed during the Reformation in the 16th century and the Revolution in the 17th century, or moved out of the country, occasionally buried. The alabaster tombs for English kings and nobles, but also for citizens who have become wealthy, can still be admired in many churches in England today. Outstanding examples are the tombs of Edward II in Gloucester Cathedral and for Henry IV and his wife Joan in Canterbury Cathedral and the triple tomb for Margaret Holland, the Earl of Somerset and the Duke of Clarence there.

The Midlands quarries have been depleted and overgrown with vegetation since the 1920s.

In most cases of its natural occurrence, alabaster is a sediment that is created in large quantities within salt lakes or isolated sea basins when water evaporates. This mode of formation can be imagined as the retreat of the sea in the trough-shaped lowlands; here often in paragenesis with carbonates, halite and other similar minerals. Depending on the approach and the deposit situation, one speaks of a mineral or evaporite rock .

However, alabaster can also arise through weathering as sinter deposits or through oxidation processes in sulphidic ore deposits.

Crystals are found in Romania (Cavnic), Poland (Tarnobrzeg), Spain (Gorguel) and Mexico (Naica, Chihuahua).
The fine-grained aggregates can be found in Italy , among other places .

A large mining area is located between Sulzheim and Bad Windsheim in Lower Franconia. Gypsum has been mined there for centuries and alabaster in the form of potato-sized tubers found as an inclusion in the gypsum.

In Alabaster Caverns State Park in Oklahoma is one of the largest, as a show cave developed, gypsum cave in the world with a length of about one kilometer. The walls of the cave are lined with pink, white and the rare black alabaster. 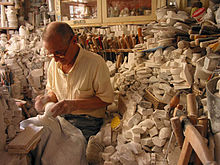 When mining alabaster for commercial and handicraft purposes, one finds egg-shaped rough blocks 1 to 3 meters in length. Alabaster is still mined and processed in Europe today. A center of European alabaster processing is the Italian Volterra , in whose surroundings the rock has been used since Etruscan times.

Since alabaster is significantly softer than many rocks, such as marble, but harder than conventional plaster, it was often used for vases and art objects. Alabaster is suitable for making small jewelry items as well as life-size sculptures and reliefs . However, from a sculptural point of view, it is one of the typical interior stones, ie alabaster is not weatherproof - such sculptures are dependent on protected spaces. The material used in churches and other buildings in place of marble was, according to Georgius Agricola, around 1546 still considered "marble". In contrast to this, alabaster is unsuitable for artistic work outdoors because it is exposed to destruction after a few years due to the effects of the weather. When cut, alabaster is very translucent and is therefore often used for lamp shells in handicrafts . In arid regions such as central Spain, they are also used as church windows. Altars made of alabaster from the Klettgau in Salem Minster are also impressive .