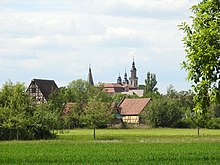 Bad Windsheim as seen from the Franconian Open Air Museum

Bad Windsheim is listed on the Aisch located town in Central Franconia district of Neustadt an der Aisch-Bad Windsheim . It is located west of Nuremberg . The health resort and spring location (coronation spring) for some mineral water companies is rural.

Windsheim has been an independent imperial city in the Holy Roman Empire since the Staufer period , which is reflected in the city's coat of arms. Windsheim was only awarded the title “Bad” in 1961.

The place is in Windsheim Bay . The Aisch flows directly to the south of the city and the Rannach flows into the Aisch as a right tributary in the southwest .

The municipality has 14 officially named municipal parts (the type of settlement and the number of inhabitants as of December 31, 2011 are given in brackets ):

The Linken- and Wasenmühle are not officially named parts of the municipality and belong to Ickelheim. The Mittel- , Neu- and Obermühle have meanwhile been torn down.

Windsheim in the 17th century, copper engraving by M. Merian

A first documented reference to a settlement (called "Uuinedisheim") comes from the year 741. The place name contains the personal name Winid . The common derivation from viticulture is wrong. The document shows that there was a church in the village that was dedicated to Saint Martin . On the occasion of the establishment of the diocese Diocese of Würzburg , Duke Karlmann donated the St. Martin's Church in Windsheim to the cathedral. The original of this document is no longer available, as it was burned in the fire of the cathedral in Würzburg in 874. The repetition and confirmation by Emperor Ludwig the Pious is documented by the document from 822. It was confirmed that the former royal parish church of St. Martin belonged to the Bishop of Würzburg. The church is said to have been consecrated in 750 by Burkard , Würzburg's first bishop.

The Martinskirche was mentioned for the last time in a document in 889. It can be inferred from an original settlement of Kleinwindsheim . The current town of Windsheim was founded a little later as a second settlement. Both settlements existed side by side for centuries. The second church (built 1190–1216) stood separate from the original settlement where the town church of St. Kilian now stands.

Windsheim was still referred to as a market ( forum ) in 1234 . In 1248 it was named an imperial city by Emperor Friedrich II , which was directly subordinate to the emperor. Windsheim is not yet listed in the imperial tax register of 1241 .

In 1343 Ludwig IV visited Windsheim and confirmed the privileges granted by his predecessors to the city, which a year later entered into close political ties with the imperial city of Nuremberg ; also Emperor Sigismund in 1413.

The monastery Windheim had been donated already 1291st The Heilsbronn Monastery acquired a farm in Windsheim in 1304, which served the Heilbronn monks as quarters. In 1313 a garden adjoining the courtyard was exchanged for the monastery. The respective leaseholder also ran the farm as a pub.

During the city ​​war , Windsheim, which had already burned down in 1381, was besieged by Neustädtern. In 1499 there was another train against Windsheim and the wine tower was laid down.

A Latin school was founded in 1393/1402 . The Teutonic Order worked in Windsheim, the Coming Virnsberg operated in Pastoriusstrasse. 14 a town house of the "Teutschherren". In 1509, Tilman Riemenschneider created the twelve messenger altar for the Kilian's Church in Windsheim.

On the Knight's Day in Windsheim in 1512, a letter from the Count Palatinate was read out, in which he said that he had not been involved in the overthrow of Konrad Schott . From 1500 Windsheim belonged to the Franconian Empire , which convened numerous district assemblies there. Since 1522, preaching in the manner of Luther has been in Windsheim and as early as 1524/25 the Reformation was introduced in the free imperial city of Windsheim and probably also in the Windsheim deanery district . Also in 1525 the peasant groups Florian Geyers and Gregors von Burgbernheim defeated the Margrave Casimir near Windsheim. In 1529 representatives of Windsheim took part in the Reichstag in Speyer , who belonged to the Protestant minority there (see Protestation ). Because of the possible consequences, this was, as for Weißenburg, a courageous and daring step for the small imperial cities. In 1530 Windsheim joined the Reichstag, along with the imperial cities of Weißenburg , Heilbronn and Kempten, of the Augsburg Confession , which Mayor Hagelstein signed.

Witch trials were also carried out in Windsheim; between 1596 and 1597 a total of 25 women were cremated in the city.

During the Thirty Years' War in 1632 the Swedes under Gustav II Adolf were in the city twice . After the war, Emperor Leopold I visited the city in 1659 ; in addition, Emperor Joseph I traveled through the city in the same year. A large part of the city was destroyed in a fire in 1730.

Pietism , which emerged in the 17th century, had also spread in the Aischgrund, especially from Windsheim . At the beginning of this movement stood the pastor Johann Heinrich Horb in Windheim , at the end at the beginning of the 18th century the mayor Tobias Schumberg.

In the course of mediatization , Windsheim lost its status as an imperial city in 1802 and was awarded to Bavaria. After a short Prussian interlude (1804), the city finally became part of the Kingdom of Bavaria in 1810 .

The Windsheimer Zeitung was founded in 1849.

The brine springs in Windsheim were first described in 1752 by Wilhelm Simon Carl Hirsching as "Gesundbrunnen auff dem Kehrenberg". Brine springs were drilled in 1902 and 1907, and the Kurhaus was built in 1906. There in 1942/43 the businessman and co-founder of the Neustädter local group of the NSDAP and SS- Hauptsturmführer Hans Göss (1894-1948) ran a camp of the Volksdeutsche Mittelstelle . On June 20, 1961, Windsheim was named a bath.

In 1982 the Franconian Open Air Museum was opened. In the following years further facilities were created, so in 1999 the spa and congress center followed and in 2005 with the Franken-Therme a thermal bathing area with wellness and sauna area. The renovated hospital church was inaugurated in 2006 as the “Church in Franconia” museum .

In 2007 the city received the German Tourism Prize .

In 2009 the 4th Franconian Day took place in the Franconian Open Air Museum in Bad Windsheim , under the motto Franconia in Europe - Europe in Franconia .

Bad Windsheim will host the state horticultural show in 2027.

Windsheim part of the municipality

The city council consists of 24 members. The local elections on March 15, 2020 led to the following result:

Mayor is Jürgen Heckel (WiR). He was elected First Mayor on March 29, 2020 in the runoff election against the previous incumbent with 56% of the valid votes.

(Bad) Windsheim has had a coat of arms since the 13th century. 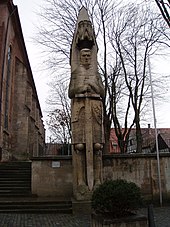 The swimmers of SV 77 Bad Windsheim started in 1995 together with TuS Feuchtwangen under the name SG Frankenhöhe . The SG women's team rose to the Bavarian League in 2004 and hosted the Bayern League preliminary round in Bad Windsheim in October 2005.

A chess club is also represented in Bad Windsheim.

There is a high ropes course at the Bad Windsheim spa and congress center .

On December 16, 2005, the Franken-Therme with Europe's largest heated salt lake was opened.

The Asiansportscenter Bad Windsheim offers a variety of Asian sports. Taekwondo, HapKiDo, Yoga, Pilates, Qigong, Ki DO etc. The athletes are members of the German national team. There were numerous German champions and international successes.

Below the wine tower is the golf course of the Golfclub Reichsstadt Bad Windsheim e. V.

The Windsheim newspaper publisher Heinrich Delp wrote the historical festival "The historical Wagner dance" based on the example of the medieval dance of the Windsheimer Wagner journeyman (privileged guild dances were common in the Middle Ages). "The historic Wagner dance" was performed in public for the first time at the parish fair for the Heimatfest in 1949. Performances of the "Wagner Dance" take place annually on Pentecost Sunday as well as on Parish Fair Sunday on Dr.-Martin-Luther-Platz. Admission is free.

At the same time the minstrel and fanfare parade was formed, the first minstrels of which already participated in the premiere of the "Wagner Dance". It is still a tradition today that the players of the festival are musically accompanied by the minstrel and fanfare procession both on the way there and on the way back from the festival. The minstrel and fanfare parade now offers its music on a national and international level and has already achieved great success. Traditional marching music as well as modern literature in the sound of a marching band are part of his current repertoire. In addition to the overall performance of the festival “The historical Wagner dance”, countless appearances at home and abroad have become common. In many competitions at national and international level, the troop has already achieved great success. He is also a member of the Bavarian Association for Minstrels. V.

The clubhouse of the "Wagnertanzgilde 1560 Spielmanns- und Fanfarenzug Bad Windsheim eV", the "Zunfthalle am Ochsenhof" is located today in a former gymnasium built in 1860, which is right next to the "Ochsenhof", here is the "Reichsstadtmuseum im Ochsenhof" "resides, is located.

The city is the seat of the central administration of the Auto- und Reiseclubs Deutschland e. V. Bad Windsheim has a spa and congress center operated by the Kur-, Kongress- und Touristik-GmbH.

Bad Windsheim has a state business school , three primary schools , including the Free Active Gollach School (until 2009), a middle school , two support centers , a vocational school and a grammar school .

Personalities who worked on site

Territories and estates of the Franconian Reichskreis ( HRR )

Municipalities in the district of Neustadt an der Aisch-Bad Windsheim