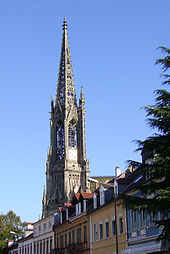 The Memorial Church in memory of the Speyer protest

Allegory of the protesting Speyer , part of the Luther memorial in Worms 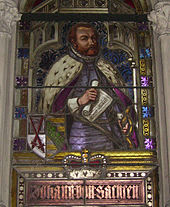 On April 19, 1529 , six princes and the authorized representatives of fourteen imperial cities met at the Reichstag in Speyer as representatives of the evangelical minority to protest against the imposition of imperial ban on Martin Luther and the outlawing of his writings and teachings, and to protest against the possibility of unhindered To demand the spread of the evangelical faith.

Eight years earlier, at the Diet of Worms in 1521 , the reading and distribution of Luther's writings was forbidden ( Worms Edict ) and Martin Luther and his followers were banned from the Reich. At the first Reichstag in Speyer in 1526, this decision was partially revised by leaving the execution of the Edict of Worms to the imperial estates. Every prince should treat religion as he can answer to the emperor and God. At the second Reichstag in Speyer in 1529, Emperor Charles V wanted to end the religious disagreement between the Catholic majority and the Protestant minority by repealing the resolutions of 1526 .

The Reformation-minded princes did not want to put up with being forced to adopt the Roman Catholic denomination by majority vote. This protestation of princes and cities is now considered to be one of the hours of birth of Protestantism .

Almost three years after the Reichstag in 1526, Emperor Charles V announced a new Reichstag for March 1, 1529. He was in turn represented by his brother Ferdinand , because he was unable to appear in person because of the war with France.

In his opening speech, Ferdinand announced the decision of the emperor to repeal the imperial decree of 1526, since it had resulted in "great rubbish and misunderstanding", and threatened any "seduction into unjust belief" with imperial ban . All innovations should remain forbidden until they have been clarified at a council that has yet to be convened. After all, he still made concessions:

“Whoever has kept the Edict of Worms up to now should continue to do so. In the landscapes where you deviated from it, you shouldn't make any further innovations and nobody should be prevented from holding trade fairs. Finally, the sects that contradict the sacraments of the true body and blood should not be tolerated at all, any more than the Anabaptists. "

On April 19, the concerns about the imperial adoption of 1526 were accepted by the majority of the estates. The evangelicals were told that they should bow to the majority's “resolutions that were properly and properly dealt with”. Thereupon the evangelical princes left the hall. When they returned a little later, Ferdinand wanted to leave the room and refused to listen to them. So their objections were read out: One protests against the decision of the majority to repeal the imperial passage of 1526. Ferdinand demanded that they should "accept the decision and obey".

The Protestant princes then had the protest letter handed over on April 20, which Ferdinand refused to accept. So it was not read out, but was made public as a printed publication.

Among other things, this protest letter said:

“So we protest and testify openly before God, our sole creator, sustainer, redeemer and savior, who alone explores and recognizes our hearts, and will judge accordingly, also before all people and creatures, that we are ours for ourselves and all male half in all actions and supposed farewells do not help or approve, but consider them to be void and irrelevant for superior and other honest reasons. "

The protest was signed by Johann , Elector of Saxony, Georg , Margrave of Brandenburg, Ernst , Duke of Braunschweig-Lüneburg, Philipp , Landgrave of Hesse, and Wolfgang , Prince of Anhalt-Koethen. The main author of the book was the Electoral Saxon Council and former Chancellor Gregor Brück .

At the final session of the Reichstag on April 24, the Reichs Farewell was read out again, but the protestation of the Protestant princes was not mentioned at all. Therefore, the councils of the evangelical princes and the representatives of the 14 evangelical cities met on April 25 and wrote an Instrumentum Appellationis in which complaints against this imperial adoption were summarized again. This letter was brought to the emperor by an embassy. From that time on, the supporters of the Reformation movement were called “ Protestants ”.

Positioning of the imperial estates

Voted for the Reich farewell