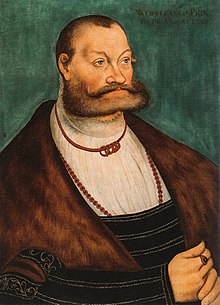 Wolfgang was the son of Prince Waldemar VI. and Margarete von Schwarzburg was born in the old Köthen castle. At the age of eight he attended the University of Leipzig in 1500 , took over the government of his country at the age of 16 in 1508 and kept his court camp in Köthen.

In 1521 he met Martin Luther at the Diet of Worms and later reported: “He won my heart.” With Luther's help, he introduced the Reformation in Anhalt-Köthen in 1525 and in Anhalt-Bernburg in 1526 , as the third and fourth country the world after the Electorate of Saxony and Duchy of Prussia (secularized in 1525, formerly Teutonic Order State). Wolfgang joined the 1526 Torgau closed League of Torgau the Protestant Estates in and was one of the most outstanding members of the Schmalkaldic League .

In 1529 Wolfgang was one of the six princely spokesmen for the protest at the Reichstag in Speyer . In 1530 he signed the Augsburg Confession at the Reichstag in Augsburg . In 1534 he undertook the first church visits in Anhalt-Köthen , expropriated the church property and bequeathed it to the communities.

In 1544, Wolfgang ceded his share in Anhalt-Zerbst to his cousins in a settlement and received Anhalt-Bernburg , where he had the "Wolfgang Building" of Bernburg Castle built in the Renaissance style from 1538 onwards. When the old castle in the city of Köthen burned down in 1547, he relocated entirely to Bernburg. He took part in the battle of Mühlberg in 1547 and was ostracized by the emperor . Wolfgang then stayed in the Harz Mountains, was appointed governor of Magdeburg by the Saxon Elector Moritz in 1551 and freed from imperial ban in 1552 by the “ Treaty of Passau ”, whereupon he got his possessions back and was allowed to reign in government.

In 1562 Wolfgang ceded his possessions to his cousins ​​and only kept Coswig , but moved from there to Zerbst in 1564 , where he died unmarried on March 23, 1566. His successor was Prince Joachim Ernst von Anhalt .

The Wolfgangstrasse in Bernburg, Dessau and Köthen remind of him.

March 23 in the Evangelical Name Calendar .