This article deals with the former member state of the German Empire, for further meanings see Anhalt (disambiguation) .

Anhalt is a region of central Germany that was a member of the German Empire (most recently as the Free State of Anhalt ) and has belonged to the state of Saxony-Anhalt since 1947 . 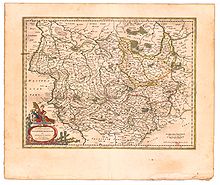 The Principality of Anhalt, map by Peter Schenk (1710)

The Anhalt principalities after the first division of 1252

The principality of Anhalt developed in 1212 through divisions of the Ascanians . Prince Heinrich I von Anhalt had chosen this name for his line to distinguish it from other Ascanian lines. The name Anhalt goes back to the Ascanian family castle, Burg Anhalt near Harzgerode ; the name Askanier refers to their residence in Aschersleben (Latin: Ascaria ). The principality thus developed from the Schwabengau and the Gau Serimunt as property of the Askanians and was part of the Holy Roman Empire . Over the course of time, the country has been split up several times through the division of inheritance , including in Anhalt-Aschersleben , Anhalt-Bernburg , Anhalt-Dessau , Anhalt-Köthen , Anhalt-Zerbst and others.

In 1797, after the Zerbst prince line died out, Anhalt-Zerbst was divided among the other Anhalt principalities . In 1806 the Prince of Anhalt-Bernburg received the right to call himself "Duke" from the last Emperor of the Holy Roman Empire , Franz II. In 1807, Napoleon I raised the two remaining states of Anhalt-Dessau and Anhalt-Köthen to duchies and joined the Rhine Confederation on April 18, 1807 . After the wars of liberation they became members of the German Confederation . 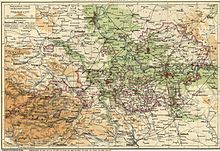 The Free State of Anhalt

After the lines in Köthen (1847) and Bernburg (1863) were extinguished, the three duchies merged to form a unified duchy of Anhalt with Dessau as the capital . In 1867, Anhalt joined the North German Confederation , which was established under Prussian leadership, as a federal state, and in 1871 it joined the German Empire . It had a voice in the Bundesrat in Berlin, as it did in the Bundestag in Frankfurt am Main.

In the course of the November Revolution in 1918, workers 'and soldiers' councils were also formed in Anhalt . They worked more pragmatically and made no radical demands. On November 12th, Prince Regent Aribert, on behalf of the underage Duke Joachim Ernst, announced the abdication and the renunciation of the throne for the ruling family of the Ascanians. Anhalt became a free state in the Weimar Republic . In the state elections in April 1932, the NSDAP was the strongest parliamentary group with 15 seats (6 were from Dessau).

With reunification in 1990, the state of Saxony-Anhalt was rebuilt within slightly different boundaries, including all of the Anhalt areas. In the period between the district reforms of 1994 and 2007 there was a district of Anhalt-Zerbst , which since July 1, 2007 has merged into the newly formed district of Anhalt-Bitterfeld ; the historical name “Anhalt” lives on in the state and district name. The area of ​​the Evangelical Church of Anhalt still corresponds to the former Duchy or Free State.

"Anhalt" is also in the name of the Anhalter Bahnhof in Berlin , which was the northern end of the Berlin-Anhalt railway line ( Berlin – Halle line ) and is now just an S-Bahn station . 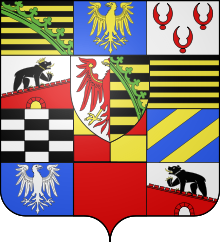 Coat of arms of Anhalt

Blazon : The coat of arms is divided three times and split twice with a central shield in the fifth field. In the fields:

The national colors were red-green-white, sometimes only green-white.

The heads of state were the Dukes of Anhalt until the revolution in 1918 ( see also: Askanier ):

Administrative division of Anhalt until 1932 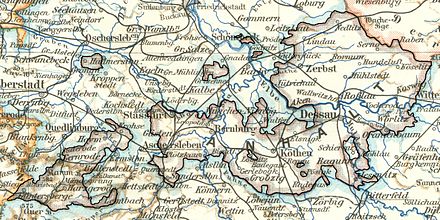 Map of Anhalt (1897) from Meyers. All areas belonging to Anhalt are outlined in black.