The duchy was German-speaking, belonged to the Holy Roman Empire until 1806 and became a member state of the German Confederation in 1815 . However, its duke was permanently the Danish king, and it belonged to the so-called Danish state . A liberal and national German-speaking movement wanted to make Holstein, together with Schleswig, a German member state with a German sovereign in the 19th century; Schleswig was not a federal member, but in the view of the German national movement it was inseparably linked with Holstein. At the same time, there were efforts in Denmark to bind Schleswig more closely to the crown under constitutional law. This led to conflict. In the Schleswig-Holstein uprising from 1848 to 1851, the German revolutionaries ultimately fought unsuccessfully against Denmark.

When the conflict broke out again due to a constitutional change in Denmark, Holstein was occupied by troops of the German Confederation in 1864. After the German-Danish War , Holstein came into an Austro-Prussian condominium with Schleswig and Lauenburg . In 1867, after the German War, it became part of the new Prussian province of Schleswig-Holstein , and from then on it no longer had its own duke.

Until the 17th century

The Duchy of Holstein goes back to the three Saxon tribes of the Dithmarscher, Holsten and Stormarner, who settled in the western and central part of Holstein in the early Middle Ages. In the eastern part beyond the Schwentine the Slavic tribe of the Wagrier settled , and north of the Eider , which marked the border since Charlemagne , Frisians and Danes settled. In 1111 Holstein was enfeoffed to the Schauenburgers , who were to shape Holstein’s history for over three hundred years. After the Holstein-Rendsburg line of the Schauenburg counts died out in 1459, the nobility of Holstein and Schleswig elected the Danish King Christian I as their common ruler in 1460 . In the Treaty of Ripen , Christian I recognized the principle of the inseparability of Schleswig and Holstein, and so the historical unity of the two territories developed, some of which had previously been economically and dynastically linked under the Schauenburgers. Nevertheless, the Eider border remained important, as Schleswig continued to be a Danish and Holstein a German imperial fief. Holstein thus remained part of the Holy Roman Empire . 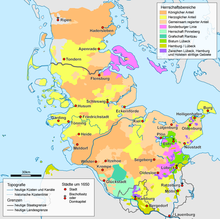 Schleswig and Holstein in 1650, both duchies are a patchwork of smaller territories divided

After a similar division of inheritance between 1490 and 1524, the duchies of Schleswig and Holstein were owned by Christian III in 1544 . divided into three equal parts in terms of fiscal revenue, which were spread over the two territories like a patchwork quilt: a royal Danish part and a ducal part each for his two half-brothers who run the Schleswig-Holstein-Hadersleben and Schleswig-Holstein- Gottorf justified.

With the elevation of Holstein-Rendsburg to the imperial duchy of Holstein, the existing feudal sovereignty of Saxony-Lauenburg ceased to exist, which could no longer enforce due to lack of power. The uprising was also linked to the claim to consider the peasant republic of Dithmarschen as part of the territory, but the final subjugation of the area was not achieved until 1559. The Hadersleben line died out in 1580, and its areas were divided between the other two lines. The division of the duchy referred to the duties and taxes, the government, on the other hand, was jointly owned by the initially three and later only two ruling houses, the Danish royal house and the ducal house of Gottorf.

Further divisions of Holstein in order to provide subsequent sons with duties and taxes, which resulted in further not ruling, but purely titular lines, but excluded their participation in the government. The county of Holstein-Pinneberg fell to the duchy in 1640, whereby the whole of Holstein was reunited under one government. In terms of taxation, the former Holstein-Pinneberg was henceforth only part of the royal share.

In the run-up to the Great Northern War , the royal line and the ducal line of Gottorf became alienated, so that in 1713 Denmark occupied the ducal part of Schleswig. As a feudal lord, the Danish king withdrew the duke's fief of Schleswig from the Gottorf family because of felony . From then on, Schleswig was reunited in a single royal government. The Gottorf line kept its possessions and co-government in Holstein because the emperor and not the Danish king was its liege lord there. With the award of the title of Grand Duke to the Gottorf Duke Karl Peter Ulrich , the so-called Grand Duke began .

During this time the Corpus Constitutionum Regio-Holsaticarum was created .

In the course of the exchange of territory in the Treaty of Tsarskoye Selo in 1773, the Danish king also received the shares of the Duchy of Holstein, which he had not previously controlled.

After the dissolution of the Roman-German Empire in 1806, the Danish king issued an incorporation patent, which de jure attached Holstein to the Kingdom of Denmark, but which in fact remained ineffective because all laws and customary rights were to remain valid for the time being, Holstein continued to be separate from Kingdom was administered and the king did not renounce his titulatures as Duke of Holstein. The only nominal incorporation was abolished in 1815 with the establishment of the German Confederation , when the German-speaking Duchy of Holstein became part of the successor organization to the old empire and the Danish king thus became German federal prince again in his capacity as Duke of Holstein.

The Holstein Assembly of Estates with its seat in Itzehoe was set up as parliament from 1834 onwards , but only represented around 3% of the population due to a high property census. In 1848 the national political disputes over neighboring Schleswig came to a head and in Kiel, at the same time as the March Revolution in Copenhagen, a German-minded Provisional Government was established , which initiated the so-called Schleswig-Holstein uprising . After the end of the war Holstein returned to the Danish State . As a result, however, the German-Danish dissent intensified, particularly on the constitutional question, which led to the federal execution (occupation) of Holstein by federal troops in December 1863. In the following year Prussia and Austria declared war on Denmark and in February 1864 invaded Schleswig and the rest of Jutland.

As a result of the German-Danish War , Holstein came into an Austro-Prussian condominium with Schleswig and Lauenburg . In 1865 the two sovereigns Austria and Prussia agreed that Austria should administer Holstein and that Prussia should receive certain special rights. After the German War in the summer of 1866, Austria ceded its rights to Prussia. In 1867, Holstein was finally incorporated into the Prussian state as part of the newly formed province of Schleswig-Holstein .

Today the area of ​​the former duchy is part of the state of Schleswig-Holstein . Today's Holstein region also includes areas of the formerly independent Free Hanseatic City of Lübeck , the Principality of Lübeck and the Duchy of Lauenburg and the former Schleswig island of Fehmarn . The previously Holstein city ​​of Altona and other smaller communities have belonged to the Hanseatic City of Hamburg since the Greater Hamburg Act of 1937 (which also added Lübeck to the Holstein region).