Sachsen-Altenburg was a duchy and federal state of the German Empire . Located in what is now the state of Thuringia , it was created in 1603 when part of Saxony-Weimar was separated and left to the sons of Friedrich Wilhelm I (Saxony-Weimar) .

In the Middle Ages, the area of ​​the later duchy belonged to the margraviate of Meißen and, since the partition of Leipzig in 1485, it belonged to the Ernestines . After the Wittenberg surrender in 1547, the area around Altenburg became part of the Albertine Electorate of Saxony , but was ceded to the Ernestine Duchy of Saxony as early as 1554 by the Naumburg Treaty . Altenburg came to the Duchy of Saxony-Weimar when Erfurt was partitioned in 1572 .

After the death of Duke Friedrich Wilhelm I of Saxe-Weimar , his younger brother Johann III took over . the reign of the duchy. But since the sons of the late Friedrich Wilhelm I of Johann III. demanded their inheritance, in 1603 the Duchy of Saxony-Altenburg was separated for them. This area included a. the cities of Altenburg, Camburg , Dornburg , Eisenberg , Roda , Ronneburg and Saalfeld .

The duchy gained territory after the extinction of the duchy of Saxe-Coburg-Eisenach in 1638 and the subsequent division between Saxe-Weimar and Saxe-Altenburg. By drawing lots that fell Coburg 1640 with the offices Coburg , Sonnenfeld , Sonnenberg , Neuhaus , Neustadt , Hildburghausen and Römhild to Duke Friedrich Wilhelm II. Of Sachsen-Altenburg. The principalities of Altenburg and Coburg were ruled by the duke in personal union and kept their own state authorities.

After the division of the county of Henneberg in 1660, the Duchy of Saxony-Altenburg was awarded 3.5 / 12 of the area in the Kahla Treaty with the offices of Meiningen , Maßfeld and Themar , the Behrungen winery , the Hof zu Milz and the Henneberg estate . 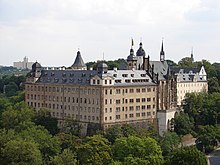 1672 died with Friedrich Wilhelm III. the older Sachsen-Altenburg line. The duchy was divided between Saxe-Gotha and Saxe-Weimar. The city of Altenburg itself now belonged with three quarters of the dissolved duchy to Saxe-Gotha, which from now on called itself Saxe-Gotha-Altenburg , but it lost the status of a residential city.

Through an inheritance agreement from 1680, the territory of Saxony-Gotha-Altenburg was divided between several duchies. The Altenburg portion of the county of Henneberg, which was dissolved in 1660, was lost to the duchies of Saxony-Meiningen and Saxony-Römhild . The Principality of Coburg went to the Duchies of Saxony-Coburg and Saxony-Hildburghausen , and Saalfeld became the residence of the Duchy of Saxony-Saalfeld . The Duchy of Saxony-Eisenberg , which was also created during the division in 1680, existed until 1707 and then fell back to Saxony-Gotha-Altenburg.

After the Duchy of Saxony-Altenburg received a constitution on April 29, 1831, it joined the German Customs Union as a sovereign federal state in 1833/34 , the North German Confederation in 1867 and finally the German Empire in 1871. 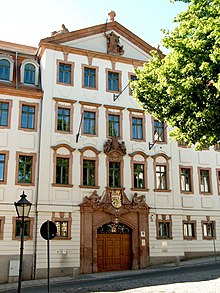 The duchy had a vote in the Bundesrat (German Empire) and Altenburg was the state capital .

The duchy joined the Dresden Mint Treaty in 1838 . Two dollars in the Prussian 14-taler monetary standard now corresponded to 3 1 / 2   South German Gulden in 24 1 / 2  -Gulden-feet, which should be considered as common club coin of the "contra end here states". This club coin of "2 Taler = 3 1 ⁄ 2   Gulden" was legally valid in every Zollverein country - regardless of who the respective issuer of the club coin was. Saxony-Altenburg minted its own coins in the royal Saxon coinage (1 thaler at 3O new pennies at 300 pfennigs). Mints existed in Dresden from 1841 to 1869, in Berlin from 1887 to 1903. The very fact that in the Kingdom of Saxony and in the Duchy of Saxony-Altenburg ten pfennigs came to groschen, in Prussia and the Thuringian states influenced by Berlin, but twelve pfennigs to groschen, led to difficulties in the border area. The Prussian pfennig was considered a "bad pfennig" because it was less valuable. It was only with the introduction of the mark as imperial currency on January 1, 1876 under the law of December 4, 1871, that the fragmentation of the monetary system was lifted.

The Thurn-und-Taxis-Post secured the post office shelf through contracts with the Ernestine duchies:

After Duke Friedrich IV of Gotha and Altenburg died on February 11, 1825, without leaving heirs, the Duchy of Gotha fell to Duke Ernst I of Coburg-Saalfeld in the inheritance distribution plan of November 12, 1826, who transferred Saalfeld to Saxony- Meiningen had to resign. Saxony-Altenburg was also created through the inheritance agreement of November 12, 1826 , when it fell to Duke Friedrich , who ceded Hildburghausen to Meiningen in return. Because of the associated new territorial division, some of the contracts had to be renewed. On November 4, 1829 , Duke Bernhard II of Saxony-Meiningen concluded a new feudal mail contract with Prince Maximilian Karl von Thurn und Taxis .

The common administration could already be recognized from the outside by the name, the postal coat of arms and the uniforms, which differed by different collar colors. The name of the post office was: "Herzoglich Altenburgische, Fürstlich Thurn und Taxis'sche Lehenspostexpedition". The postal coat of arms therefore combined both coats of arms, the ducal below and the princely Thurn and Taxissche above. The contract with Thurn und Taxis was canceled in 1847; the royal Saxon post now also supplied Sachsen-Altenburg. On August 1, 1847, the Duchy of Saxony-Altenburg handed over its nine post offices to the Royal Saxon Post after the opening of the railway line Leipzig - Altenburg (September 12, 1842) and Altenburg - Crimmitschau (March 15, 1844), as it is now cheaper with transport was connected to the Kingdom of Saxony.

The higher regional court in Jena, which is common to all Thuringian states, had jurisdiction . It comprised the four Saxon-Ernestine states, the Principality of Schwarzburg-Rudolstadt and the two Russian principalities as well as the Prussian districts of Schmalkalden, Schleusingen and Ziegenrück. The Duchy of Saxony-Altenburg formed the district of the Altenburg Regional Court with six (from 1906 seven) local courts .

As a member of the German Confederation , the Duchy provided a contingent of 982 infantry and formed the 1st Battalion of the Armed Forces Reserve Division . The infantry formed a battalion and a hunter company in five companies. In 1850 a second battalion was established, so that there was now a fusilier regiment with two battalions of four companies.

After the military convention in the German Empire concluded with Prussia on February 4, 1867, the Altenburg military, together with the contingents of Schwarzburg-Rudolstadt and the two Reuss, formed the 7th Thuringian Infantry Regiment No. 96, which belonged to the 4th Prussian Army Corps in Magdeburg. Its 1st Battalion was garrisoned in Altenburg . After 1897 the 8th Thuringian Infantry Regiment No. 153 was set up, with Altenburg being garrison of the 1st and 2nd battalions. The III. The regiment's battalion was in Merseburg .

Blazon : The coat of arms is divided six times and split twice with a central shield on the fifth and eighth field. In the fields:

The district offices of Altenburg and Ronneburg

In Altenburg, the duchy owned a world-famous playing card factory , as did a porcelain industry in Kahla. Machine and metal goods were also produced to a small extent, the world-famous sewing machine manufacturer Vesta should be mentioned here . The agriculture mainly operated the cultivation of wheat, rye, barley, oats, potatoes, fruit and vegetables, favored by the high-yield loess soils of East Thuringia. For the year 1907, the duchy's livestock is given as 12,401 horses, 67,745 cattle, 7,568 sheep, 77,681 pigs and 15,594 goats. In the same year, mining in the Meuselwitz-Rositzer district produced 3,060,777 tons of lignite. A mineral bath with a spa in Ronneburg promoted tourism. The lively trade in the duchy was supported by the operation of 185 km of railway lines, a state and savings bank, and 19 savings banks.

Most of the residents belonged to the Evangelical Church , whose head was the Duke of Saxony-Altenburg as summus episcopus . In 1907 this was divided into eight administrative districts with 103 parishes. The Catholics were subordinate to the Apostolic Vicariate of Saxony, based in Dresden. 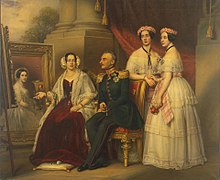 From 1826 the ducal family resided in the residential palace in Altenburg. The Eisenberg residential palace was only the residence of Duke Christian von Sachsen-Eisenberg from 1681 to 1707 . The Hunting Lodge for the Merry Return in Wolfersdorf was built in the Renaissance style from 1548 to 1551 (neo-Gothic alterations in 1858) and was named after the return of Elector Johann Friedrich I from captivity. After his abdication in 1918, the last Duke Ernst II lived here until his death in 1955. Another ducal hunting lodge was located in Hummelshain , which was supplemented by a new building in the neo-Renaissance style, the New Hummelshain Hunting Lodge , from 1880–85 .