Märkische residence and capital Hamm, Merian engraving from 1647. View of the fortified city from the north across the Lippe.

The Grafschaft Mark (regionally also called "Die Mark") was a territory of the Holy Roman Empire of the German nation in the Lower Rhine-Westphalian Empire . It belonged to Brandenburg-Prussia since the 17th century .

The county extended to both sides of the Ruhr along Volme and Lenne , between the Vest Recklinghausen , the imperial city of Dortmund , the Bishopric of Münster , the county of Limburg , the Duchies Westphalia and Berg , the county Gimborn , the imperial abbey of Werden and Reichsstift food .

In the High Middle Ages, the Counts von der Mark were among the most powerful and influential Westphalian regents in the Holy Roman Empire . Their name goes back to their residence Burg Mark near the village of Mark, which today belongs to the city of Hamm . He lives on today in the name of the Märkisches Kreis and in the geographical name of Märkisches Sauerland .

The county of Mark covered an area of ​​about 3000 km² and extended both in the north-south direction between Lippe and Agger and in the west-east direction between Gelsenkirchen and Bad Sassendorf over about 75 km.

The Ruhr , flowing in an east-west direction, divides the area of ​​the county into two very different landscape areas, the northern, fertile plain of the Hellweg - Börden and the southern, rough low mountain range of the Sauerland .

The southern part of the county is crossed by the Lenne in a south-north direction . In the area of ​​the lower Lenne, the county of Limburg , which was established after 1243 and was a fief of the Counts of Berg , was located until 1808 .

The ancestral seat of the Counts von der Mark was Mark Castle near Hamm , which gave them their name, since the 1220s . Previously, as Counts of Altena, they had their headquarters at Altena Castle in the Sauerland .

The Counts von der Mark and their later legal successors established various settlements or gave them city rights. The oldest of these foundations is the Brandenburg residence city of Hamm , which was founded as a planned city on Ash Wednesday 1226 and protected an important transition over the Lippe on the border to the Prince Diocese of Münster . The hammer city law has been taken over from the only slightly older Lippstadt city law . The hammer right was used by the counts of the family of those von der Mark as a model for all further awards of city rights until their extinction in the male line in 1609. Coins were minted in Hamm as well as in Iserlohn and Unna .

The city of Soest played a special role among the Brandenburg cities . It is the oldest city in the territory of the county of Mark and was given a special status when it passed to the county after the Soest feud in 1444–1449, which granted it extensive freedoms or the old freedoms that it had enjoyed in the Duchy of Westphalia .

The second oldest city in the county, which can only be partially assigned to it, is the Lippstadt condominium . For the first time, the Counts of the Mark obtained part of the rulership rights in 1376 in the context of inheritance disputes between the noble lords of the Lippe (founding family of Lippstadt) and the Counts of Tecklenburg , where they acted as mediators between the feuding parties . With the transfer of the county to the Margraves of Brandenburg in 1609 and finally in 1666, the new lords took Lippstadt as a fortress town for Brandenburg-Prussia .

City charter granted by the Counts of the Mark until 1609

Coats of arms of the counties of Kleve and Mark, united in Brandenburg hands , later of the Duchy of Kleve and the county of Mark. Representation from Scheibler's coat of arms book 1450–1480.

In the years 1160/61 the Counts of Altena split from the Counts of Berg . The resulting County of Altena was divided up from 1180 in a new division of inheritance between the sons of the Count of Altena. The younger son Adolf received the property around the Oberhof Mark near Hamm around 1198 . This was sold around 1170 by the nobleman of Rüdenberg , Rabodo von der Mark, to the Archbishop of Cologne Philipp von Heinsberg and leaned back to Rabodo and was then either by way of the sale of Rabodo's feudal right or through a new loan after Rabodo's death to Adolf's father Friedrich von Berg-Altena arrived. Adolf's father built Mark Castle in 1198/1199, shortly before his death, for the benefit of his newborn son on the castle hill belonging to Oberhof Mark . Adolf moved his headquarters there, and he, like the family he descended from, called himself from then on " von der Mark ".

In the Battle of Worringen in 1288, Count Eberhard I. von der Mark fought on the side of Brabant and his relative, Count von Berg. Eberhard took a position against his liege lord, the Archbishop of Cologne , in his function as Duke of Westphalia . Since Brabant was victorious with its allies, the county of Mark was able to gain supremacy in southern Westphalia and became politically independent from Cologne.

In 1388 and 1389 Engelbert participated in the Great Dortmund Feud ; his main ally was the Archbishop of Cologne, Friedrich III. from Saar Werden . The feud ended with a peace treaty mediated by Soest. Dortmund paid 7,000 guilders each to Mark and Kurköln; however, the “voluntary” payment that came about under pressure from Soest was not recorded in the peace agreement. Militarily, neither the Mark and the Archdiocese of Cologne nor the city of Dortmund had gained the upper hand. Dortmund suffered considerable economic damage, however, and was therefore forced to this compromise peace. Engelbert was at war with the Archbishopric of Cologne and other gentlemen in Westphalia for almost the entire period of his reign. He died of the plague in 1391.

Adolf III. von der Mark , the son of Adolf II von der Mark and Margaretes von Kleve , acquired the county of Kleve in 1368 . After the death of his older brother Engelbert III. von der Mark , who died without male descendants in 1391, was his successor as Count von der Mark, and the two counties were united for the first time. In 1417 the county of Kleve was elevated to a duchy and the rulers now called themselves dukes of Kleve and von der Mark . Both territories later belonged to the Lower Rhine-Westphalian Empire . As a result of the Soest feud (1444–1449), the city of Soest and the Soest Börde came under the rule of the Duke of Kleve and Mark and thus in close connection with the county of Mark. The relationship between the city of Soest and its new masters was characterized by very extensive self-government. 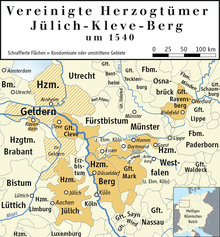 The oldest treasure book Schatboik in Mark from 1486 is now kept in the Münster State Archives. The general land tax to be paid to Duke Johann II was decided at the state parliaments in Wickede on April 24 and May 4, 1486. Further tax lists for the collection of the Turkish tax come from 1542 and 1598.

Johann II. Von Kleve-Mark died in 1521 , and his son Johann , Duke of Jülich - Berg from 1511 , also succeeded him in Kleve-Mark. He thus formed the United Duchies of Jülich, Kleve and Berg , making him the most powerful prince in the German west. In 1609 the ruling dynasty of the House of Mark died out in the male line, and when the Duchies of Jülich-Kleve-Berg were divided, the County of Mark, together with the Duchy of Kleve and the County of Ravensberg, initially passed on to the Elector and Margrave of Brandenburg on a provisional basis and in 1666 when heirs were compared ( Jülich-Klevischer succession dispute ).

In the county, especially since the Prussian period , there were various supraregional important pre-industrial densification zones, not least supported by a mercantilist economic policy. This included wire production in the Altena area and the production of scythes on Enneperstraße . Against this background, coal mining was also promoted.

In 1753 there was a fundamental reorganization of the local civil administration; separate administrative and judicial districts have now been established. From then on, the county of Mark consisted of four "district councils" ( Altena , Hamm , Hörde and Wetter ) and two "tax councils" (urban district north of the Ruhr and urban district south of the Ruhr) as well as six district court districts ( Altena , Bochum , Hagen , Hamm, Lüdenscheid and Unna ).

As a result of the Fourth Coalition War , the county was ceded to France by Prussia in the Peace of Tilsit in 1807 . By decree of March 1, 1808, Napoleon linked the county of Mark and other areas with the Grand Duchy of Berg, which was created in connection with the establishment of the Rhine Confederation in 1806 . With the introduction of French administrative structures in the Grand Duchy, the county of Mark was assigned to the Ruhr Department .

The grand-ducal rule ended with Napoleon Bonaparte's defeats in Russia and the Battle of Leipzig and Napoleon's first abdication . As previously Prussian property, the county of Mark fell back to Prussia at the end of 1813 . The Brandenburg possession of Prussia was confirmed in the final act of the Congress of Vienna (1815).

On April 30, 1815, the county of Mark was included in the Prussian administrative reform; the seat of government was relocated from Hamm to Arnsberg , despite an originally different decision , so that the county became part of the newly created administrative district of Arnsberg , which also included the former Electoral Cologne Duchy of Westphalia and formed the southern part of the Prussian province of Westphalia . Shortly afterwards the administration was supplemented by the newly formed circles. The name of the county of Mark was retained as a regional landscape designation ; In addition, the title Graf von der Mark was used by the Prussian King or German Emperor until 1918 .

Until 1753 the following administrative districts existed:

In 1753 the county constitution was introduced in the county of Mark as part of an administrative reform . The county was divided into four counties. These goods

The area of ​​Grafschaft Mark included the districts of Altena , Bochum , Dortmund , Hagen , Hamm , Iserlohn (partly) and Soest (partly). Thus the county was no longer existent as an administrative unit.

Today this area corresponds roughly to the Ennepe-Ruhr district , the Märkisches Kreis , parts of the Soest district and the Unna district , the independent cities of Bochum , Hagen and Herne as well as large parts of Dortmund , the southern half from Gelsenkirchen to the Emscher , smaller parts of Essen and the districts of Hamm south of the Lippe .

The first rulers came from the Berg-Altena sidelines of the Berg family. Berg died out in the male line in 1225; the inheritance went to the heir daughter and thus to the House of Limburg. The remaining Berg-Altena house was divided into the Altena-Isenberg and Altena-Mark lines in 1180. House Mark grew out of the Altena-Mark line and belonged to the county of Mark until 1609. In 1609 the house of Mark went out after the last Duke of Jülich , Kleve and Berg , Count von der Mark and Ravensberg , Herr zu Ravenstein , died childless and mentally ill.

The inheritance in the county of Mark came to the Margraves of Brandenburg from the House of Hohenzollern in 1609, initially together with the House of Pfalz-Neuburg ; However, the condominium of the princes entitled to inherit soon ended with the Jülich-Klevian succession dispute in a de facto division of the estate, which was finally confirmed in 1666. The county dissolved after the coalition wars as an administrative unit in the Prussian state; However, the title of Count von der Mark was only revoked with the abdication of Kaiser Wilhelm II. 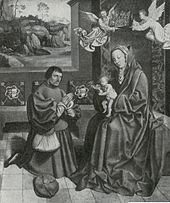 Counts of the Mark, Altena and Krickenbeck

Dukes of Jülich, Berg and Kleve, Counts of the Mark and of Ravensberg

Territories of the United Duchies of Jülich, Kleve and Berg under the rule of the House of Mark