Map of the Duchy of Prussia (dark yellow)

Flag of the Duchy of Prussia

The Duchy of Prussia or Duke of Prussia was a state that existed from 1525 to 1701 and comprised the eastern part of the Teutonic Order , which had been secularized in the course of the Reformation . Its capital was Königsberg .

Prussia was the first principality to convert to ( Lutheran ) Protestantism in early modern Europe . Under Albrecht , who ruled for over 40 years, the period of cultural prosperity falls (especially from 1544 to 1568). This was strongly promoted by taking in Protestant refugees from Poland-Lithuania . When Albrecht Friedrich was unable to govern because of his mental illness , the duchy was administered by ducal councilors and a number of Hohenzollern regents.

The duchy was outside the Holy Roman Empire and was initially a fiefdom of the Polish crown . As a result of the inheritance of the duchy to the elector of Brandenburg, the state of Brandenburg-Prussia was able to emerge from 1618 . The elector obtained sovereignty in the duchy in 1657 . It became the eponymous territory of the Prussian monarchy when he was raised to the rank of King in Prussia in 1701 as the Kingdom of Prussia . 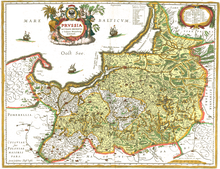 The Duchy of Prussia 1576: Duchy and Royal Polish Prussia not differentiated in color (the Duchy subsequently highlighted in color), Pomeranian not counted as part of Prussia.

New Testament of Polish Refugees Jan Seklucjan (Editor) and Stanisław Murzynowski (Translator), 1551. As the first Protestant state, the Duchy of Prussia became the base of the Reformation in Poland-Lithuania .

The Teutonic Order state that remained after the Thirteen Years' War (1454–1466) became a fiefdom of the Crown of Poland with the Second Peace of Thorn in 1466 . In 1511 the Teutonic Order elected Albrecht I of Brandenburg-Ansbach from the House of Hohenzollern , a nephew of King Sigismund I of Poland, as Grand Master . In order to be able to refuse the Polish king's feudal oath like previous grandmasters , Albrecht sought the support of the Roman-German Emperor Maximilian I. However, in 1515 on the Prince's Day in Vienna, he concluded defense and marriage alliances with the Jagiellonians and declared that he was the Teutonic Order in Prussia will no longer support.

After four years of unsuccessful war, Albrecht concluded peace with Poland in the Treaty of Krakow in 1525 , agreed to the recognition of Polish fiefdom, converted the religious state into the secular Duchy of Prussia and introduced the Reformation based on the Lutheran model.

The hereditary ducal dignity in Prussia should apply to all his descendants and those of his brothers. Other relatives from the Hohenzollernhaus should also be able to take their place. One of Albrecht's fief obligations to the Polish king was the extension of the coin reform begun in Royal Prussia to include Ducal Prussia. In the subsequent currency negotiations , in which Nicolaus Copernicus took part as the representative of Royal Prussia , the negotiator from Poland ultimately prevailed. The result was a unified currency area that included both Prussia, Poland and Lithuania .

The emperor and empire did not recognize the secularization : The German Order appointed Walther von Cronberg as the new German master , who in fact could not exercise any governmental power in Prussia and did not take his seat in Königsberg but in Mergentheim . Since 1526 the office of grand master in the empire had the same rank as that of a prince-bishopric . In 1527 Cronberg received the authorization from the emperor to call himself "Administrator of the High Mastery". At the Reichstag in Augsburg in 1530, the emperor enfeoffed him - formally and without any practical effect - with the regalia of the Teutonic Order and the state of Prussia. 1532/34 the emperor imposed on Albrecht the imperial ban , which could make him nothing but Protestant rulers outside of the realm, of course. The son of Emperor Maximilian II still carried the title of "Administrator Prussia" until 1618; after that the office was called "Hoch- und Deutschmeister".

In 1544 Duke Albrecht founded the University in Königsberg. The cultural achievements during his tenure were the Prutenic tables (an updated astronomical atlas) and the creation of Prussian maps as well as a coin reform under the direction of Copernicus. During this time, evangelical refugees were accepted and especially the training of pastors and the first translations of religious scriptures into the various languages ​​of his subjects and neighboring peoples. After Duke Albrecht's death in 1568, Elector Joachim II. Hector of Brandenburg, son of Albrecht's cousin Joachim I Nestor , obtained in 1569 from the Polish King Sigismund II August , at the same time brother-in-law of Joachim II, the duchy of Prussia for the Brandenburg Hohenzollern .

The mandate of July 6, 1525 , also called the Reformation mandate , was an act issued by Albrecht von Brandenburg-Ansbach, which announced the official transition of the Duchy of Prussia to the Evangelical Lutheran denomination of Protestantism . This document confirmed the country's departure from the Roman Catholic Church with the intention of promoting “the return of the only Word of God ” ( Sola scriptura ). On December 10, 1525, the Prussian state parliament issued the church ordinance that should regulate the newly established regional church from now on.

This made the Duchy of Prussia the first Protestant country in the world. In the same year, other territories in the Holy Roman Empire followed ; many of them were principalities administered by the Hohenzollern. Albrecht had been a Lutheran since 1522. Through the mandate, the Evangelical Lutheran denomination received full state support . The Protestant theologian Andreas Osiander from Ansbach , who was supposedly responsible for Albrecht's conversion, left the imperial city of Nuremberg and came to Königsberg i. Pr. To become reformer of the duchy there.

After the constitution of the ducal state and the later kingdom, four senior councilors led the government: Oberburggraf, Obermarschall, Landhofmeister and Chancellor. They formed the so-called Oberratsstube, which existed as the budget ministry until 1804. The Obermarschallei was on Burgkirchenplatz, the office in Junkergasse, and the Landhofmeisterei in Landhofmeisterstraße in Königsberg. Later the King of Prussia bestowed the dignities as mere titles on outstanding officials. The title of Chancellor in Prussia was transferred to the President of the Higher Regional Court in Königsberg during the reforms after the Peace of Tilsit , and it lasted into the 20th century. The last "Chancellor of the Kingdom of Prussia" was the OLG President Karl Ludwig von Plehwe until 1918 . The Oberburggraf lived in the Königsberg Castle . Chancellor, Landhofmeister, Obermarschall and Oberburggrave of the kingdom sat in the Prussian mansion until 1918 .

In the duchy Albrecht was succeeded by his fifteen-year-old son, Albrecht Friedrich, who was incapable of government . The country was initially administered by the councilors until 1577, until the King of Poland appointed Margrave Georg Friedrich from the Ansbach line of the Hohenzollerns as guardian of Albrecht Friedrich and thus regent of the duchy. After his death, the king transferred guardianship to Elector Joachim Friedrich from the Brandenburg line in 1603 , who handed over the office to his son Johann Sigismund in 1605 , who had been married to Anna of Prussia since 1594 , a daughter of Duke Albrecht Friedrich. Johann Sigismund followed his father as elector in 1608. With Albrecht Friedrich's death in 1618 the Franconian-Prussian Hohenzollerns died out. Their inheritance fell to the Brandenburgers. In this way, Brandenburg and Prussia were linked in a personal union from 1618 , whereby the Brandenburg elector in his function as Prussian duke was initially still obliged to be vassal to the Polish king.

This lending relationship ended in 1657 with the Treaty of Wehlau , through which full sovereignty over the duchy passed from the King of Poland to the Elector Friedrich Wilhelm of Brandenburg and his biological heirs. With this, the Brandenburg electors finally achieved the position of sovereign dukes in Prussia, and the union between Brandenburg and Prussia began to take on the character of a unified state. The Duchy of Prussia was also referred to as a principality during this time (as in church registers before 1700). 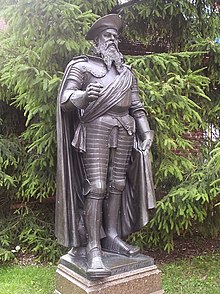 Resided in Königsberg
1525–1568 Albrecht (Prussia)
1568-1573 Albrecht Friedrich (Prussia) , who because of his government's inability to 1571 under the guardianship of Duke's Upper councils was

With the coronation of Frederick III. From 1701, the duchy of Brandenburg was called the Kingdom of Prussia . The Brandenburg-Prussian ruler, Elector Friedrich III. now called himself King in Prussia . Previously, Emperor Leopold I had contractually assured that he would be recognized as a king inside and outside the empire . With this, Friedrich achieved equality of status with the neighboring rulers of Brandenburg-Prussia, the Elector of Saxony , who was King of Poland-Lithuania in personal union , the Elector of Hanover , the future King of England , and the King of Sweden . Since around the middle of the 18th century, historians have spoken of the State of Prussia , which unites the various possessions of the Prussian king.

Only after the annexation of the royal (Polish) part that had remained with the Polish crown in 1772 did the Kingdom of Prussia actually encompass all of Prussia and, like the entire state of Prussia, was now ruled by the King of Prussia . When, after the first partition of Poland in 1772, the former cities of Prussia paid homage to Frederick II's royal share , the king ordered the new acquisitions to be designated West Prussia and the previous Kingdom of Prussia East Prussia on January 31, 1773 .