The Kingdom of Poland ( Polish Królestwo Polskie , Latin Regnum Poloniae ) was the designation of the Polish state on the one hand as the sovereign Poland in the years 1000 to 1795 and on the other hand as the " Congress Poland " connected by a personal union with the Russian Empire from 1815 to 1916. The In 1916, Germans and Austrians established the reign of Poland in the parts of Congress Poland they had occupied during the First World War . This existed until 1918.

The Kingdom of Poland began either in the year 1000 with the elevation of the Polish Duke Bolesław I to "brother and helper of the Roman Empire" by Emperor Otto III. or by the self-coronation of Bolesław I as King of Poland in 1025 shortly before his death. The later expanded Polish-Lithuanian Empire ended in 1795 with the third partition of Poland forced by Russia, Austria and Prussia and the abdication of King Stanisław August Poniatowski . 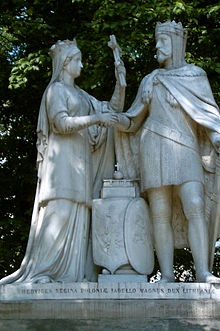 The memorial for the 400th anniversary of the Union of Krewo in Krakow shows Queen Hedwig and Grand Duke Jogaila, who after his baptism and coronation had the Lithuanian heartland Christianized.

After the kingdom was split up into individual duchies (1138), it was not until 1295 that a king was crowned again with Przemysław II . However, against the background of the concept of a Corona Regni Poloniae , a dualism of king and estates, especially of the Polish aristocracy, soon developed .

Important is the alliance entered into with the Grand Duchy of Lithuania in 1386 , as a result of which the Lithuanian Grand Duke Jogaila ascended the Polish throne as Władysław II Jagiełło and thus founded the Jagiellonian dynasty in Poland-Lithuania .

The Kingdom of Poland was ruled from 1000 to 1572 by the following dynasties who claimed to be rulers (kings) of Poland: 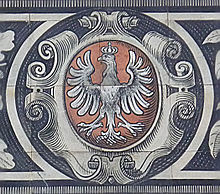 This federal dual state, also known as Poland-Lithuania, was repealed with the May constitution in 1791 . Both parts of the empire merged when they came into force to form the unified state of Rzeczpospolita Poland , which went under after the failed Kościuszko uprising with the Third Partition of Poland in 1795.

After the fall of the Rzeczpospolita in 1795, the countries of the Polish-Lithuanian crown fell to Russia , Austria and Prussia . After the Congress of Vienna in 1815, the so-called Congress Poland , a formally independent "Kingdom of Poland" based on a constitutional monarchy , was established on the territory of the Polish Duchy of Warsaw , without Poznan and Krakow , established by the French Emperor Napoleon in 1807 should be connected with the Russian Empire. The agreements were consistently disregarded and gradually curtailed by the autocratic regime in Saint Petersburg in the years after the congress. The agreed sovereignty rights were not fully granted to the Poles. After the failed November uprising, 1830–1831, the existing Polish administration and autonomy were liquidated by the “Organic Statute” in breach of the Vienna Congress Act in 1832, and the area was gradually incorporated into the Russian Empire administratively as the “ Weichselland ” province .

The reign of Poland

During the First World War , the Central Powers proclaimed the “ Polish Kingdom ” (“Królestwo Polskie”) in 1916 . However, this was more of a measure directed against Russia than a recognition of the Poles' right to statehood. This kingdom existed formally until 1918. Coins were also issued to underline statehood.