This article deals with the German currency unit. Further meanings are given under Pfennig (disambiguation) . For the Swiss high jumper see Ilsebill Pfenning .

The pfennig (abbreviation Pf, Pf, Pfg or Dpf, symbol ₰) was a German currency unit that had existed as cash from Charlemagne until the introduction of the euro in 2002. He was over the centuries at the lowest Coinage -Nominal.

The word pfennig (as a silver pfennig replacing the denarius or denarius ) can be traced back to the 8th century and was named Penning , Panni (n) g , Pfenni (n) c , Pfending u. a. called, e.g. B. in Prussia until 1873 Pfenning . The -ing - or -inc - suffix served alongside -ung , the formation of belongingness substantive u. Ä. And occurs in other coin denominations, for example in Schilling . The further origin is not clear, but an early borrowing from the Latin pondus ("weight", see pound ) is possible.

There were also “light pennies”, “good pennies” or “customs pennies”, which could be read directly from the embossing. Some pfennig gardens were given special names in the vernacular, such as the Erfurt "coffin pennies".

The pfennig was the model for the penni in Finland, for the fenig in Poland (1917 to 1918) and for the penn in Estonia (1919 to 1928) , which were in circulation until the introduction of euro cash . Even today, running in Bosnia-Herzegovina of fening order. The penny in Great Britain was created around the same time as the Carolingian denarius / pfennig.

The penny was also an old silver weight ( 1 / 256 Silver Weight Mark), comparable to the English pennyweight .

Occasionally the term penny is also used on tokens that are not money in the strict sense. This could be, for example, “bread pennies”, which a city issued in times of need to subsidize the need for bread, or tokens within the truck system .

History of the penny

Regensburg pfennig from the 10th century.

Charlemagne stipulated in the so-called Carolingian coin footer that 240 coins (equivalent to around 1.7 g of silver per coin) should be minted from one Carolingian pound of silver , which were named in Latin with the word denarius after the old Roman coin (see Sachsenpfennig - Coin foot ). The term later developed into the denier in France and the denaro in Italy. The Arabic word dinar (دينار) can also be traced back to the Latin word denarius . In Old High German, the denarius was named with the word pfennig ("phenninc") as early as the time of Charlemagne. It was later called Penning in northern German and Dutch-speaking areas and Penny in England . The term paenig for the Roman denarius appears for the first time in England around 765, when King Offa had denarii made of silver based on the Carolingian model . This explains the abbreviation "d" for d enarius, which was used in Great Britain for the "old" penny until 1971. The early pennies weighed around 1.3 g to 2 g, which tended to steadily decrease over the centuries. The frequent fluctuations in weight of the same pennies were partly due to production technology, with the higher-weight penny copies being subject to "constant private sorting", see Gresham's law . At that time, and even up to modern times, the total weight of a certain number of pennies of the same type had to be correct for larger payments, which tended to encourage different rates between smaller and larger coin denominations and then reached its absolute climax in the tipper and rocker era . For example, the terms “ shock penny” (= 60 pfennigs), “ shock groschen ” or “pound sterling” (= 240 d) provide information on these methods of payment with small coin denominations.

From the 8th to the 13th century the pfennig (or denarius) consisted of high-quality silver, in addition to other units only used as invoices, the sole currency denomination and had high purchasing power . This is why this era is also called the penny era in coinage . Pfennig halves, which were also known as oboles or scherfe , were minted only very rarely . 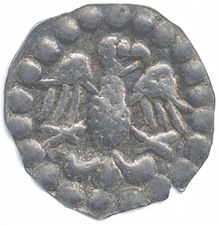 The Pfennig was around 1200, the largest and only German silver Kurantmünzen , except -Nominal of imported foreign gold and silver coins. Smaller monetary values ​​were created by halving or quartering ( hack silver ), which was very easy to do with the one-sided thin hollow pennies or "strubben", which were then referred to as bracteates from the 17th century . The “change” that was often still needed to compensate for the price and quantity of buyers and sellers in the city markets consisted of small amounts of natural produce and goods that were included in the overall purchase process.

Around 1200, the various minters in Germany minted the pfennig very differently in terms of rough weight and fine silver weight ( shot and grain ) ( regional pfennig ), because the German kingship gave up the coin shelf or was not able to consistently enforce it as a uniform imperial footer. As a result, many regional pfennigs with different rates to each other were created over time. Because of the large amount of copper added, pfennig coins were given a black color; a distinction was then made between white pfennig ( Wißpennig , Albus , silver pfennig) and black pfennig (copper pfennig). A well-known example is the Haller Pfennig , which later became a Heller or Haller as an independent denomination in the later Imperial Coin Regulations and of which two pieces cost one pfennig until the 19th century. B. in Bavaria. Even with the early Hellern ("Händleinhellern") a noticeable copper alloy was used, so that the Heller soon became the first German "pure" copper coin.

The pennies of the Schinderling era, the black pennies, were minted from 1457 mainly in southern Germany, especially in Austria and Bavaria, with almost no silver. The so-called Böse Halser of this time consisted essentially of a copper-tin alloy. The Schinderlinge period ended with five pfennigs in 1460. For a long time, the black pennies undermined trust in the Austrian silver currency.

For the successful introduction of the silver groschen currency, which replaced the regional pfennig, enough change had to be available. The silver-rich Saxon dukes, for example, had Hohlpfennige and Hohlheller minted in their mints in Gotha and Langensalza according to a given coin order. The constant reduction in the silver content of the groschen, however, meant that new ordinances to reduce the silver content were required for the penny coinage, which was temporarily carried out by the cities (see the hollow pennies of the Thuringian cities ).

Price examples for the Saxon-Thuringian area

The pfennigs are usually coins from the state main mint in Freiberg .

At around the end of the 17th century, the pfennig declined to a pure copper vein coin. Some German minters minted copper and billon pennies at about the same time in the 18th century . However, from the middle of the 18th century the share of billon coins compared to pure copper pfennig coins tended to decrease, which was also carried over to 2 to 4 pfennig coins. The last silver-containing 1-pfennig coins with the denomination "Pfenig" were minted in Germany from 1808 to 1811 with the year 1808 in the Duchy of Saxony-Coburg-Saalfeld and are rare. The copper pennies were also not all of the same value. Bremen therefore called its pennies sware penninge (heavy pennies) for which the nominal name “Schwaren” prevailed.

Various small coin systems were in effect in the Prussian provinces until 1821. Only in the provinces of Brandenburg and Westphalia was the pfennig the smallest coin in terms of value. With the Prussian small coin reform of 1821, a uniform small coin system was introduced for all Prussian provinces. To distinguish it from the pfennigs before the reform, the new denomination was called "pfenning". One thaler no longer accounted for 288 pfennigs, but for 360 pfennings. This new value ratio was also named on the coat of arms: 360 EINEN THALER . Other states minted 1½ pfennig coins well into the 19th century, for example Saxony-Weimar-Eisenach.

In the southern German states (Baden, Württemberg, Bavaria with the Palatinate, Saxony and other smaller ones) the value of the Pfenni (n) g was fixed at 1/240 of a guilder since the coinage system from 1506 to 1871. (1 gulden at 60 kreuzers, the kreuzer at 4 pfennings, the pfenning at 2 hellers). The half pfennig (Heller) was the only coin of the guilder period to remain officially valid after the introduction of the Reich currency (because of the beer tax in Bavaria).

In some southern German states the term “ Heller ” was a synonym for the penny (for example in the city of Frankfurt and in the Duchy of Nassau). In Bavaria the Heller was considered half a penny.

The gold mark introduced as currency in the German Reich by the law of December 4, 1871 , received the pfennig with 1 mark = 100 pfennig as a decimal division under the second Reich Coin Act of July 9, 1873 . Until the introduction of the euro, this division was the smallest currency unit of the respective Mark currencies in Germany .

The last West German pfennig was copper-colored, embossed with a one on one side and oak leaves on the reverse and showed the year of issue and the code letter of the place of issue.

The last pfennig coins of the GDR (as well as the coins denominated up to and including 2 marks) were all made of aluminum, with the exception of the 20-pfennig piece and the 50-pfennig piece that had been in circulation until 1956, which were made of brass or an aluminum - copper - alloy passed.

Here are some historical value relationships between the pfennig and other coin denominations, some of which were derived from the original pfennig:

The penny in idioms and songs

Incorrect transcription from 1950 from Karlsruhe

A few penny coins have a high value among collectors; For example the 50-pfennig coin with the inscription " Bank deutscher Länder " and the year of issue 1950. The mint in Karlsruhe, coin letter "G", erroneously minted 30,000 fifty-pfennig pieces with the inscription "Bank Deutscher Länder" instead of "Federal Republic of Germany" in 1950 ". These mintings were only declared valid coins through a subsequent order, since at this point the coin sovereignty had already passed to the Federal Ministry of Finance. The high collector's value resulting from the rarity even led to forgeries, sometimes through combinations of halves of different coins that were ground on one side. On the back of the 50-pfennig piece, which was valid from 1949 to 2002, Gerda Johanna Werner is shown as an oak planter .

The 1-pfennig coins with the minting year 1948 are also in demand. Another rare pfennig piece is the 2-pfennig issue from the mint in Hamburg (J) in 1969 made of copper; this coin is not attracted to a magnet due to the material used.

With the abolition of the German mark and the introduction of the euro , the pfennig is no longer a valid money symbol either. For “pfennig” the abbreviation “d” was used with priority, where “d” stands for the “ denarius ” (plural: “denarii”), a small Roman coin (cf. abbreviation “d” for → penny ). The pfennig symbol was used until after the Second World War . As the illustration on the right shows, it was a “d” written in the German Kurrent script with a downward curve. Until the 18th century, the latter was a common designation for abbreviations in German Kurrent script, such as the dot today . In the edition of handwritten originals or printed texts that use the penny mark, which is no longer in use today, in the German current script, it is often incorrectly transcribed with "ch" due to its similar form. The symbol corresponds to the German symbol for Deleatur . The penny sign is defined and coded as follows:

Wikisource: Law on the issue of a nickel coin worth twenty pfennigs (Germany, 1886)  - sources and full texts