This article is about the alloy . Other meanings under bronze (disambiguation) .

Fragment of a bronze bust of Marcus Aurelius , Paris, Louvre Br. 45, around 170 AD 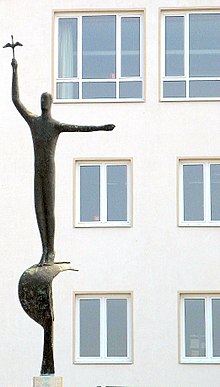 The collective term bronzes refers to alloys with at least 60% copper , unless they can be assigned to the brass due to the main alloy addition zinc .

In terms of metallurgy, the term is only used today together with the preceding main alloy additive; one speaks correctly about a antimony and arsenic bronze , aluminum bronze , lead bronze , manganese bronze or phosphor bronze . In historical contexts, such as the Bronze Age and bronze sculptures , “bronze” (sometimes spoken without the ending -e in Austria) is used on its own and mostly for a tin bronze .

The current name for the alloy was first borrowed from the Italian bronzo in the 17th century , later also from the French bronze . The prehistory is etymologically unclear. The word was first adopted into Italian from the Orient in the 14th century. A connection with the Persian word birindsch ( pirinğ or birinğ ) for copper can not be ruled out , from which Middle Latin bronzium and Italian bronzo could be derived.

The structures that actually arise are mainly determined by the great diffusion inertia of tin, which prevents the equilibrium from being established during crystallization from the melt. This means that tin bronze has a structure consisting exclusively of α mixed crystals only with tin contents below 5–6%; with higher contents it consists of soft α mixed crystals and the hard α / δ eutectoid.

The addition of tin increases the strength of the alloy and reaches a maximum between 10 and 15% tin. The yield strength increases almost linearly, being multiplied compared to pure copper, and reaches a maximum at around 20 percent. The elongation at break begins, starting from the high values of the copper, rapidly decrease beyond 5% tin and approaches approximately exponentially to the zero line, which is practically measured between 20 and 25%. The hardness increases steadily, which increases with higher tin content. The density decreases by 0.1 g / cm³ for every 6% tin added. With 8% tin it is 8.79 g / cm³. 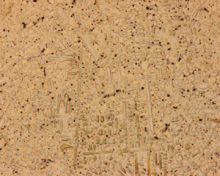 Structure of a cast bronze with 11% tin and some lead, visible the dendritic α-mixed crystals with segregation , fine-grained eutectoid and dark lead collections

Tin bronzes are standardized as copper-tin alloys and, due to the fundamentally different requirements and properties, are divided into wrought alloys (max. 9% tin), which are suitable for metal forming, and cast alloys (9% to 13% tin). In addition, so-called bell bronzes come with about 20%, max. but 22% tin is used.

The welding consumables and hard solders based on copper-tin are subject to their own standardization .

If alloys contain little or no tin, they are often called “special bronzes”. Their names are derived from the alloy additive: aluminum bronze, manganese bronze, nickel bronze etc. (see overview table below). Beryllium bronze is a special copper material for spark-free tools that contains only 2-3% beryllium and a small amount of cobalt .

Lead bronze (also copper-tin-lead-bronze) is a bearing alloy with 5–22% lead.

Gunmetal is not a tin bronze, so it is not "bronze" in the narrower sense, although it is sometimes referred to as "machine bronze", "cannon bronze" and the like. It is a copper-based alloy whose properties are determined less by the addition of tin than by zinc , lead and nickel .

Table overview of the bronze alloys

The composition of modern bronze statues was named in 1905:

According to Meyers in 1905, they had beautiful green patina :

Wolfstür at 800 - the two-winged bronze portal of Aachen Cathedral

Tin bronze is from the middle of the 4th millennium BC. Between the middle Danube and the Caspian Sea. B. from the 3rd millennium BC BC in the Balkans, as well as for the Kura-Araxes culture (Transcaucasia).

The term, already known in Greek, is also associated with Brundisium , the Latin name of today's southern Italian Brindisi , which in ancient times , belonging to New Greece, was a kind of center of bronze processing and the bronze trade.

The commercial production of bronze is thought to have been between 2500 and 2000 BC. Started in the Middle East ; in Mohenjo-Daro the small figure of a girl (dancer) was found. In China , the use is also in the 3rd millennium BC. BC, documented at the latest during the Xia period .

Bronze is therefore considered to be one of the first alloys made and used by humans, harder than pure copper, but in comparison with a lower melting point, a finding that already required a basic metallurgical knowledge. The composition of the earliest bronzes, however, was often still dependent on the ores used; Alloys with arsenic resulted, whose negative influence on the mechanical properties is known today. Bronzes containing lead and - due to the ore processed - those with antimony were also processed.

The Bronze Age , as the successor to the Copper Age , which in turn replaced the New Stone Age , brought bronze weapons , tools and jewelry (bronze brooches) to the Aunjetitz culture and the Alpine Bronze Age. It was gradually replaced by the early Iron Age ( Urnfield culture , Lusatian culture ), and finally, with the Hallstatt culture, antiquity was introduced. Depending on the task at hand, bronze and iron were still used side by side. However, through trial and error, low carbon wrought iron was found. As a result, bronze increasingly lost its importance for the manufacture of hand weapons. With the Greeks and Romans, weapon technology experienced a quality never seen before and developed in the building industry. Bronze monuments also attest to the great experience in antiquity. The early Middle Ages gave a new impetus, bell and piece casters supported ecclesiastical and secular rule for several centuries, until iron smelting and iron casting replaced bronze.

The traditional uses of bronzes

Bronzes and bronze alloys as part of modern techniques

Copper-tin alloys for different techniques are also adapted to the requirements with equally different alloying elements. The addition of nickel increases the toughness of cast alloys, the strength of wrought alloys, lead is an indispensable component of all bearing alloys, separated in the structure as metallic lead, it supports the emergency running property that is important for bearings .

A wide area of ​​application for copper-tin alloys is mechanical engineering and tool construction, but also for spring and contact elements in electrical engineering and electronics, e.g. B. in circuit sockets with gold-plated spring bronze. The chemical and food industries make use of the corrosion and wear resistance.

Classic tin bronzes are not suitable for the production of propellers and ship screws for seagoing ships; instead, multi-material aluminum bronzes are used, which are resistant to cavitation and corrosion in contact with seawater .

Just as fine and ultra-fine granulates are produced from other metals and alloys - commonly referred to as "metal powder" (copper powder, aluminum powder) - also from bronze. Pyrophoric properties make all metal powders a component of fireworks, but what is more important is that they enable the technique of powder flame spraying to produce three-dimensional objects. With additional hot isostatic pressing ( sintering ), properties of a metal model are achieved, thus saving time and money in the production of prototypes and small series.

Bronze cannons in front of the Invalides in Paris