In machine and device construction, a bearing is an element ( machine element ) for guiding components that move against each other . 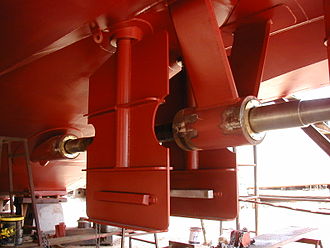 Drive shaft of a propeller in two radial bearings

Bearings enable movements in the desired degrees of freedom and prevent movements in the undesired degrees of freedom. The most common bearings are simple pivot bearings (radial bearings) and linear bearings . In both cases there is exactly one ( ) desired degree of freedom. With radial bearings only one rotation is wanted , with linear bearings only one translation (free). Some radial bearings also allow translation in the direction of the axis of rotation, so they have (example: radial plain bearing ). Radial bearings that do not allow this translational have, the more familiar term radial-axial bearing ( Radiaxlager ). A commonly used rotary bearing that allows three rotations is, the so-called ball joint with (two of the three rotations are in practice, however, is not "continuous rotation", their angle of rotation is smaller than 360 °).

Depending on the operating principle used, a distinction is made between plain and roller bearings . In plain bearings, the mutually moving parts touch or are more or less separated from one another by a lubricating film (liquid, less often gaseous). In rolling bearings, there are rolling elements (balls or rollers) that perform a rolling motion between the parts.

Differentiation according to the degree of freedom

Most common camp names do not indicate the existing freedoms, but rather the restricted freedoms in the relative movement between the two parts of the camp.

A radial bearing is a pivot bearing, the rotating part usually being an axially extended shaft . It prevents two freedoms in the radial direction of its circular cross section or transversely to the shaft axis and is therefore also called a transverse bearing. The number of desired degrees of freedom is three more freedoms are to be prevented. As a rule, the shaft is only prevented from performing the other two rotations by designing the bearing to be significantly axially extended. The corresponding tilting stress is avoided if the shaft is equipped with a bearing at both ends. The third translation in the direction of the axis of rotation is usually only prevented so that it can bear a significant load in deep groove ball bearings . A rotary slide bearing has degrees of freedom if it is not designed as a radial bearing .

Another common name is support bearing. This explains that operating forces generally only act radially on the machine frame via the bearing, that is, have to be removed. Even the dead weight of the shaft only has a radial effect in the bearing if it is arranged horizontally.

Even if there are no axial forces, a shaft must be prevented from executing axial movements. This one freedom is to be denied. If there are significant axial forces from operation or weight, a special axial bearing is required that is designed for these forces.

Other common names are longitudinal bearings, thrust bearings and thrust bearings. It is called a thrust bearing because only compressive forces can be transmitted between the two paired plain bearing parts. The type of pairing is the same in the rolling bearing, only the number of pairings is greater than one as a result of the additional rolling elements. In the case of axial bearings, it is pointed out that two axial pairings / bearings are necessary.

A radial axial bearing of a shaft only has the freedom of movement in the circumferential direction, which is often only desired ( ). As a plain bearing, for example, it is a single-acting radial bearing that is supplemented with two axially acting bearing pairs (each acts as a "stop" in only one direction). Two point bearings (also punch bearings) at the ends of a shaft together also form a radial bearing with both the radially and axially acting form element in the points. Two point bearings are necessary because a single point does not absorb any force in the opposite direction.

A linear bearing is used to guide a straight line movement between two bodies. The number of degrees of freedom is It is the only bearing whose name reveals what it allows (not what it prevents).

Lineargleit- and linear ball bearings are guided on rods jacks with thereof are applied why two parallel mounted to the freedom of rotation to be prevented.

Differentiation according to the active principle

In the plain bearing, the two parts moving against each other have direct contact . They slide on each other against the resistance caused by sliding friction . This can be kept low by choosing a low-friction material pairing, by lubrication or by creating a lubricating film that separates the two contact surfaces.

If the two parts touch, which is the case with most plain bearings used, wear occurs in the contact surfaces , which limits the service life. In addition to liquids (mostly oil, more rarely water), air ( air bearings ) are also used as a separating film . The production of a film with so-called full lubrication requires additional effort and special operating conditions.

A rolling movement also takes place in a cutting edge bearing used for small back and forth rotating movements. There are no rolling elements revolving, but the two parts to be mounted on top of one another make a mutual small reciprocating rolling movement. The rolling surfaces are very small (the edge of the bearing is rounded to a point). There are applications in scales , pendulum clocks and other measuring devices with moving parts.

Storage of a shaft

If there are two thrust bearings facing each other, special measures are required in order not to hinder the thermal longitudinal expansion of the shaft.

The deep groove ball bearings that are often used can not only be loaded radially, but also axially. In order not to hinder thermal expansion, only one bearing is axially fixed in the frame and on the shaft, the "fixed bearing". All other bearings are installed as "floating bearings" either in the frame or on the shaft so that they can move axially. For example, a sliding bearing or a roller bearing can be used as a floating bearing as an axially displaceable bearing.

Other types of storage