The plain bearing is adjacent to the bearings in the machinery and equipment most frequently used bearing type .

In the plain bearing, the two parts moving relative to one another are in direct contact . They slide on each other against the resistance caused by sliding friction . This can be kept low by choosing a low-friction material pairing, by lubrication or by creating a lubricating film ( full lubrication ) that separates the two contact surfaces. If the two parts touch, which is the case with most plain bearings used, wear occurs in the contact surfaces , which limits the service life. The generation of the separating lubricating film with full lubrication requires additional expenditure that is only possible for large bearings in large machines. The sliding resistance causes conversion of part of the kinetic energy into thermal energy which flows into the bearing portions, and is optionally derived.

Differentiation according to the type of sliding resistance 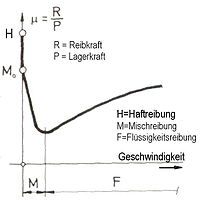 Stribeck curve (schematic):
coefficient of friction μ as a function of the relative speed in the lubrication gap of a hydrodynamic plain bearing

Low-friction material pairings are used in plain bearings with solid body friction (also dry friction). Sometimes one of the two partners has a so-called " self-lubricating property " (for example a material alloyed with lead or tin , a plastic such as PTFE or technical ceramics ). The second partner ( usually the shaft in radial bearings ) is made of steel.

In plain bearings, where durability and low energy loss are important (e.g. when converting energy in turbines and generators ), full lubrication is used, whereby fluid friction occurs. The lubricating film must be put under pressure so that it can separate the contact surfaces against the bearing force. In hydrostatic bearings one is to oil pump used. In hydrodynamic plain bearings , the oil pressure in the lubricating film is generated by the two contact surfaces that are moved relative to one another, but this means that there is no pressure when starting and stopping the movement and there is mixed friction.

With lubricated plain bearings, mixed friction occurs with increasing load and decreasing speed. In the Stribeck curve this is the area to the left of the minimum; the area of ​​the wear-free hydrodynamic plain bearings begins to the right of the minimum . In the mixed friction area, the lubricant ( solid , greasy or oily ) is located in the micro-roughness (depressions) of the contact surfaces, while only the tips of these roughness touch each other, which reduces the sliding resistance compared to the unlubricated bearing.

The shaft is encompassed by the bearing bush, the material of which can be very different, for example:

Plain bearing bushes made of sintered metal; on the left an electric motor end shield with a wobbly mounted bearing bush

Graphite (carbon) is suitable as a bearing material because its abrasion has a self-lubricating effect. The carbon modification graphite has crystal planes that can easily slide on one another. Graphite bearings are also advantageous when electrical currents have to be transmitted via bearing points, which should be avoided with other bearings - both plain bearings and, in particular, ball bearings, since currents through contact points of different metal alloys cause material removal.

It should be noted that with these bearings, the coefficient of friction increases significantly with higher loads and thus rising temperatures . Nevertheless, they are suitable for higher temperatures at which lubricated bearings fail.
An example of a graphite bearing is the thrust bearing for actuating the clutch in older motor vehicles.

As a ceramic material, for example silicon carbide in pumps used also in fiber-reinforced large pumps. The slide bearings are located in the pump housing and are lubricated with the pumped liquid. The corrosion resistance and the extremely low wear due to the hardness are the great advantages of these bearings. Problems arise, however, when the pumps run dry.

Stone bearing (with capstone ) in a bracelet clockwork

Marked As early as 1869, Daniel Spill, a partner of Alexander Parkes , the plastic Xylonite to be suitable for it, "Gears and Friction Wheels" ( gears and friction wheels ) and "Bearings for Machinery", so plain bearings manufacture.

Modern plastic plain bearings consist of special, self-lubricating plastics. They are suitable for low to medium bearing forces. In contrast to other materials, the risk of "seizing" is extremely low. Plastic plain bearings are therefore among the most important representatives of the lubrication and maintenance-free plain bearings.

These are so-called composite materials , which consist of base polymer, reinforcing materials (for example: fibers and fillers) and of embedded solid lubricants or oils. During operation, these lubricants constantly reach the surface due to micro wear and thus reduce friction and wear on the bearings. The plastic used is mostly PTFE (polytetrafluoroethylene) because of its particularly low coefficient of friction against other substances (including steel).

In general, there are plastic plain bearings in many different variants, depending on the desired property. As a rule, they are lubricant-free, corrosion-resistant, light and insensitive to dirt. Various manufacturers have special materials on offer for special applications, such as electrically conductive or food-grade ( FDA- compliant) bearings.

In the case of lower-quality bearings in which both partners are made of thermoplastic, the lubricants required for this contain PTFE.

Bronze or iron sintered bushes are less dense than solid. The lubricant can become embedded in their pores (mixed friction). Resin greased lubricant can be removed from the pores by heating. Then the sockets are re-soaked with oil.

Sintered bearings are found in many small electric motors (for example in PC fans) and serve as sliding bushes in linear bearings .

Anchor with balance wheel; Ruby used as a bearing can be clearly recognized by its reddish color

Bearing bushes made from largely single-crystal ruby are used particularly in small mechanical watches , instruments and scales . They work against steel and are lubricated in watches, but not in scales. In higher quality watches, stones are used in larger numbers, at least for the balance wheel bearings.