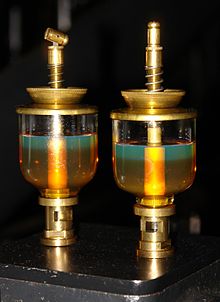 Lubricating oils are the most important technical lubricants . They are used to reduce friction , which causes noise and especially wear. In addition, lubricating oil also serves to dissipate heat. Lubricating oil forms a sliding film between moving surfaces, for example in a hinge ; More on this in the article on lubrication .

In demanding environments that are exposed to rain or dust, for example, lubricating greases are used , which can shield the bearing points or roller bearings from external influences and remain at the lubricating point for longer because they are more viscous (more viscous). 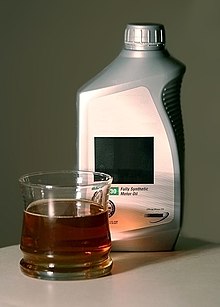 With around 50% of the total amount in Europe and around 32% in Germany, motor oil represents the largest single group of lubricants; the total amount has stagnated since about 2001 at around 344,000 t per year. They are used in almost all cars and trucks .

Internal combustion engines place high demands on engine oil. The engine oil is not just a lubricant, but has other important tasks:

In order to be able to fulfill these tasks, various requirements are placed on the engine oil, which are characterized by chemical, physical and technological properties. These properties are simplified:

In addition, the following requirements are placed on the engine oil:

Modern four-stroke engine oils are usually mineral or synthetic base oils with an additive package . The base oil is the oil , a petroleum distillate . Since oils have such a high boiling point that they would normally decompose during distillation, this is done under vacuum (see vacuum distillation ). This lowers the boiling point so that temperatures of a maximum of 350 ° C are sufficient. The distillates are then filtered, clarified and refined, among other things, so that an unalloyed oil with a certain viscosity is obtained. This oil is not a pure substance, but a fraction , i.e. a mixture of different hydrocarbons with a similar boiling range. For a long time, these oils were the only oils used in motor vehicles, today they are still available from some manufacturers as compressor oil or machine oil (very old engines (pre-war machines) need these oils because their sealing materials are often not compatible with modern additives).

Up until the 1940s and thereafter, highly stressed engines (especially motorcycle racing engines) were also lubricated with vegetable oil ( castor oil ); the Castrol company has earned its reputation with such oils. Castor oil is called castor oil in English .

In the past, various means were offered which were supposed to improve the oil quality of mineral oils; some of them still exist today. In addition to solid-state additives such as molybdenum disulphide and colloid graphite ( spheroidal graphite ), there were also various chemical additives, some of which served their purpose quite well. Around the 1940s, oils came onto the market that were equipped with such additives as standard and were marketed as HD oils ( heavy duty ).

There is a relatively large range of high-quality oils based on renewable raw materials for two- and four-stroke engines ( biogenic lubricants ); these usually consist of synthetic esters based on vegetable oil. By not using zinc or phosphorus-rich additives, you can also increase the durability of catalyst systems. Corresponding oils are being developed for diesel engines .

In 2003, the proportion of biogenic engine oils was only 0.02% and thus 61 t, although the oils have comparable properties. In 2005 the share was still well below 1% of the total market, but in terms of volume it had meanwhile reached 2,000 t. The reason for the low proportion is likely to be the higher price and less awareness of the biogenic oils.

With the discovery of polymers at the end of the 1960s, multigrade oils were developed. These oils have the property that they do not change their viscosity as much at different temperatures as single-grade oils. You can use the same oil in summer and winter, and starting the engine is made much easier. Even when the engine is cold, lubrication takes place faster, which reduces the wear and tear caused by cold starts. Because of these advantages, single-grade oils quickly disappeared completely from the market. The oil manufacturers' chemists also discovered that there are synthetic materials that lubricate just as well as mineral oils and have a few other beneficial properties. These properties can also be defined more precisely than with the natural product petroleum.

This was the hour of birth of synthetic oils , which now have outstanding properties. They can be produced for very large viscosity ranges, have good cold flow properties, do not tend to coke and are very pressure and temperature stable. They are pressure-resistant in two ways: On the one hand, they build up a very stable lubricating film that does not tear off even under extreme loads, and on the other hand, the structure of the molecules is more difficult to destroy during operation than with mineral oil. In some cases, only synthetic engine oils can be used for highly stressed sports engines.

Vegetable oils, for example a biodegradable chain spray based on rapeseed oil , cannot be mixed with lubricating oils or fats of fossil origin; the oils dissolve into one another, but cannot be used technically.

When mixing synthetic and mineral oils, opinions are controversial. On the one hand, it is said that today's oils can be mixed without any problems; on the other hand, the objection is that mixing reduces the effect of the additives . Motor oils that meet the API specification must always be miscible with one another; the quality must then still correspond to that of the lowest of the oils contained.

(Fully) synthetic low-viscosity oils enable fuel savings of 1 to 6%. Since the partially reduced HTHS viscosity (oils such as 0W-30, 0W-40, 5W-30, 5W-40) can lead to lubrication problems, approval from the motor manufacturer is required.

The SAE viscosity classes were in 1911 from the S ociety of A utomotive E ngineers set to give consumers the choice to facilitate the proper oil. Single grade oils have an identifier in the format “SAE xx” or “SAE xxW” (W = winter). The smaller numbers stand for thin oils, the larger ones for more viscous oils. With the introduction of multigrade oils, the system could no longer be used and was consequently expanded: The format is now "SAE xxW-yy". This notation means that at 0 ° F (approx. −18 ° C) the properties of the oil in question correspond to a single grade oil with  viscosity SAE xxW, at 210 ° F (approx. 99 ° C) it corresponds to an SAE yy oil. To achieve this property, multigrade oils contain polymers that change their spatial structure as a function of temperature. The molecules are clearly shown tangled up in cold oil. As the temperature rises, the molecules stretch more and more, thereby increasing the friction between the particles.

An inexpensive standard mineral oil usually has a viscosity of SAE 20W-40 or 15W-40. High-quality synthetic oils have now reached the viscosity ranges 0W-20, 5W-50 and 10W-60. In principle, any oil that covers the prescribed area can be used. So if a 20W-40 oil is required, the engine will run fine with a 10W-40 or 20W-50 oil without suffering any damage. However, the oil manufacturers recommend the use of special motorcycle oils for use in motorcycle engines with a common engine / gearbox oil circuit; Among other things, to avoid problems with slipping clutches (see also JASO specification). They also recommend not to use low-viscosity oils (i.e. those with SAE values ​​lower than 5W-yy) because a more viscous base oil is more stable over the long term. In particular, the extremely high pressures and shear loads that occur in the transmission break down the above-mentioned polymers (which must be contained in larger proportions in oils with a large viscosity range) over time. This is one of the reasons why the oil loses viscosity over time.

The SAE viscosity classes 70W to 250 are used for the classification of gear oils.

API classifications were from the A merican P etroleum I nstitute created. They define certain minimum requirements for engine oils. There are different classifications for gasoline engines and diesel engines , identified by the letter S (Service, or Spark Ignition) for gasoline engines and C (Commercial, or Compression Ignition) for diesel engines, as well as a further letter indicating the quality level. The higher the additional letter in the alphabet, the more demanding the tests on the oil. Thus, an engine oil with the API SL identifier has a higher quality class than one with API SG. The currently highest quality classes are SN and CJ.

The following is a list of some of the existing classes with a brief description:

The motor oil specifications of the Association des Constructeurs Européens d'Automobiles are adapted to the requirements for an engine for operation according to European conditions and currently (2008) represent the current standard for motor oils. In addition to engines of European design, the standards also take into account some American models and Test runs and thus guarantee a certain degree of integration with the API classifications.

There are four categories:

These are further differentiated into classes A for gasoline engines and B for diesel engines:

However, there is a trade-off between the “SAPS” ingredients in oils with high shear stability and the resulting combustion residues.

In simplified terms, it can be said that the HTHS viscosity indicates the flow strength and thus the stability of the lubricating film of an engine oil at an elevated temperature - if the value is above 3.5 mPa.s then the oil is very shear-stable even at high temperatures. Values ​​below this (below 3.5 mPa × s) are referred to as reduced HTHS viscosity, which, due to the reduced flow toughness, can mean less friction loss in the engine and thus fuel savings, but also less lubrication and shear stability.

Following the example of the C classification for passenger car diesel engines with particle filters, one can say in a nutshell: Oils according to ACEA C1 have a greatly reduced HTHS viscosity, which can help to save fuel, is one of the low SAPS oils Class best for the diesel particulate filter (DPF), because they are the least likely to cause problems, but oils according to ACEA C1 do not have as good lubrication stability as, for example, compared to the other oils (ACEA C2 / C3) of this specification. (⇒ C1 = better for DPF, C3 = better for engine)

Attention! Oils with a reduced HTHS viscosity are special oils whose use requires that the vehicle manufacturer has coordinated the entire construction chain accordingly. In the case of older or unsuitable vehicles, such oils can even lead to engine damage in extreme cases or, conversely, the diesel particulate filter can clog.

Therefore, you must pay close attention to the manufacturer's approvals.

Two-stroke oils are divided into the classes API TA to TC for mopeds , motorcycles , lawn mowers , chainsaws , etc., as well as API TD and the NNMA classes TC-W (corresponds to API TD), TC-WII or TC-W3 for two-stroke outboard motors . Here, too, the later letter or the higher number stands for the higher quality.

GLOBAL is an association of European two-stroke engine manufacturers that writes down the performance requirements in ISO specifications.

Specification according to API standard

Specification according to JASO standard

In fact, only one NMMA class is valid for requirements in outboard motors .

Gear oils are described with the abbreviation GL (gear lubricant) and the numbers 1 to 6. The numbers indicate the load capacity of the oil.

The API classification differentiates between the grades for gear oils