1881, electric outboard motor in use

Outboard at the stern of an inflatable boat 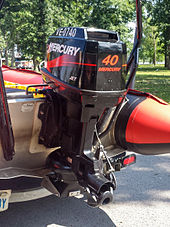 An outboard motor ( colloquially outboard motor ) is a ship's engine in which the engine, power transmission, gearbox and propeller are combined in a structural unit. In contrast to the inboard motor , this unit can be attached and detached from the boat with relatively little effort .

The outboard motor was invented in 1881 by the French Gustave Trouvé. He used an electric motor that he had patented in 1880 (French patent no. 136,560). In the years that followed, there were still several tinkerers who presented their own designs. The American Cameron B. Waterman sold 3,000 of the outboards he had developed in 1907. But it was only with the model invented by Ole Evinrude that the outboard could establish itself on a large scale from 1910 onwards. In Europe, the Swedish brothers Alrik and Oskar Hult presented design drawings for an outboard motor in 1907 and brought them onto the market a little later under the company name Archimedes . After various mergers of Swedish boat engine manufacturers, Archimedes ultimately belonged to Volvo Penta .

Outboards are mostly attached to the stern of the boat (" engine mirror") or in a motor shaft called Bünn within the boat near the stern; Side-mounted sideboards or bow- mounted motors pulling the boat are rare . The engine can often be pulled up or tilted up at an angle so that the underwater part of the engine is not damaged during transport or landing, or creates unnecessary drag when sailing. When outboard motors are mounted to pivot laterally, pivoting the boat can be more effective than using a rudder alone . As a result, most outboard boats do not have a separate rudder; however, such boats can only be steered to a very limited extent when the propeller is stationary.

Smaller outboards are usually equipped with a pull-wire starter and a tiller control with which the motor is swiveled in its bracket around its vertical axis to port or starboard . If there is no gearbox with switchable reverse gear, the motor must be swiveled 180 degrees and, if necessary, the tiller thrown if you want to maneuver backwards. With smaller engines, the tank is usually located in the engine housing, but it can also be outside in the boat.

More powerful outboards have electric starters , usually with a charger for the starter battery and to supply the electricity consumers on board, and can be operated via remote control systems using the steering wheel and thrust lever.

With a special trimming device , the motor can be optimally adjusted to the water position around the transverse axis.

The constantly tightening emissions regulations in Europe and the USA are the main reason why the simple two-stroke carburettor engine has been significantly further developed. Based on the work of the companies Ficht (since 2000: Provenion) and OMC , two-stroke engines with direct injection are now available that meet the strict emission standards and have a clear power- to- weight advantage over four-stroke engines .

Outboards are made for mounting on different boats with shafts of different lengths. The lengths normal or short shaft (15  inches , approx. 38 cm) and long shaft (20 inches, approx. 51 cm) are common, with the measurement from the anti-ventilation plate to the upper edge of the boat transom. For sailing boats with a relatively high transom or for motor yachts suitable for the sea, there are also motors with super long shafts (25 inches, approx. 63 cm or 30 inches, approx. 72 cm shaft length) available. The boat builder specifies which shaft length is required by means of the height of the boat transom. If an outboard motor is fitted with a shaft length that does not match the transom, the boat's handling characteristics deteriorate.

Environmental regulations prevent the European and US American distribution of products manufactured by Russian and Indian manufacturers, while Chinese manufacturers are struggling with the protective and patent rights in force in the USA, Europe and Japan.

The first German outboard motor was offered in 1911 by the Berlin company Fritz Ziegenspeck under the brand name "EffZett". The best-known German manufacturer was the König company , and Zündapp also produced outboard motors for a time.

The two-stroke outboard engine "Forelle" from the GDR manufacturer IFA was no longer sold after German reunification ; it's a rear engine. A side board from the GDR is the IFA type "Tümmler" with 1.8 kW (2.5 HP) rated power. The "Delphin" engines manufactured by the Zündapp company are also side-mounted; At the end of the 1960s, Zündapp brought out a 3.7 kW (5 HP) two-stroke outboard with a reversing gear and 6-V electrical system, which was not widely used.

There were other small German manufacturers after the Second World War , such as B. the company Berning from Schwelm , but none of them could prevail against the American mass products and disappeared from the market.