This article deals with the type of ship. For the sailing magazine of the same name, see Yacht (magazine) .

Sailing yacht with dinghy in tow 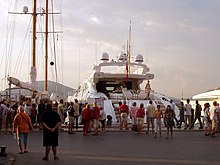 A yacht puts in the port of Saint-Tropez on 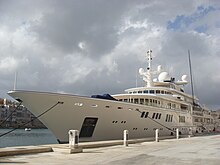 Curiosity: Paul Allen's luxury yacht Tatoosh with its own sailing yacht as a dinghy on the port side

A yacht or yacht (from Dutch yacht , shortened from Middle Low German jachtschip, “hunting ship”, “fast ship”) is (today) a watercraft for sports and / or leisure purposes that - apart from special cases - has a deck and a cabin Is provided. According to the type of propulsion, a distinction is made between motor yachts and sailing yachts . What is essential for a sailing yacht - as opposed to a dinghy - is a solid keel, usually provided with ballast .

In everyday use, the term yacht is usually only used when the vehicle is over a certain length. Under about 7 m one speaks more of a boat , over 10 m of a yacht. A typical yacht in European coastal waters today is around 10 to 17 meters (30 to 56 feet) long and has multiple cabins. On German inland lakes, boat lengths of 6 to 15 meters predominate in yachts.

Larger yachts are also referred to as maxi yachts , depending on their size as mini-maxis , maxis or supermaxis . The boundaries between these categories are by no means fixed, but the class division of the Yacht Club Costa Smeralda can serve as a guide , which in its regattas has yachts from 18-24 m as mini-maxis , yachts over 30.5 m as super taxis and everyone in between as Maxis starts.

Very large yachts, which are not used for sporting purposes, but are used as pure luxury objects, are referred to as mega yachts or super yachts .

The usual building materials for yachts today are fiber-reinforced plastics (mostly GRP or CFRP ). Wood used to be the only available building material, but it has been almost completely replaced by plastics. Steel and aluminum are used very rarely. Concrete ( ferro-cement ) was tested in the 1970s, but never caught on . The construction of a modern yacht is requires a very complex and demanding job that much experience.

Comfort plays a major role in maxi and mega yachts; they are more similar to private cruise ships than pleasure boats.

The construction, equipment, motorization and equipment of a yacht depend very much on the preferred area and the strength of use. Yachts that are put into operation in the EU must comply with the CE standard and be classified in one of the categories A to D according to their construction and equipment.

As a rule, yachts, whether motor or sailing yachts, with a hull length of 21 meters (70 feet) or more are the responsibility of semi or fully professional crews ( yachtsmen ). If there are two or more people, one speaks of a crew, which is mostly a skipper and a steward. As the size of the yacht increases, there are hardly any limits to the number of crew members - in the case of mega yachts it can contain more than 60 people, including B. Cooks and engineers. The skipper is then often a master with a patent for long voyages .

Because of the high personnel costs in particular, yacht charter has become a popular alternative to owning a yacht. This also avoids further disadvantages of having your own yacht (acquisition costs, distance to the berth , dependency on climate and area).

The largest private yachts are over 180 meters in length. They can reach 20-36 knots .

The masses tend to drive yachts between 10 and 20 meters in length. Sailing yachts are safe for the high seas from around 12 meters, motor yachts only significantly above this due to their lower stability. In addition, the fuel supply of a “normal” motor yacht of between 500 and 1,500 liters limits the range, because 100 liters per hour can also be used here. The range of a sailing yacht is not limited by fuel and its top speed is determined by the speed of the hull . 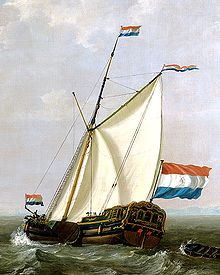 A Herenjacht as a VOC official vehicle from 1790

Many forms of ship have been referred to as yachts in the past . In addition to small three-masted hunts with transom around 1600, ships for inland and coastal waters that were specially designed for pleasure cruises with an early form of the high sail were so named in the first half of the 17th century . In the further course of the 17th century the term yacht was used more for administrative and stately vehicles. These are known as the Statenjacht or Herenjacht. The donation of two such yachts to the English court marks the beginning of the use of this form as a yacht in England . In Denmark, a cargo ship shape with this designation was developed in the late 17th century. It was a fast sailor with sharp Hullshape at rounder bow, stern and narrower masted gaff rigging with Topprahen. This shape was still being built in Denmark and northern Germany throughout the 19th century.