Watercraft are vehicles that are designed to move on or in the water . The most important distinction, with also legal consequences, is the type of drive, which is roughly classified in the order in which it occurs:

Apart from exceptions such as hovercraft and hydrofoil , the necessary lift in mechanically operated vehicles is generated by the Archimedes' principle .

The term watercraft serves as a comprehensive category for boat and ship types. Most watercraft are referred to as a boat , raft, or ship . Although most ships are larger than many boats, the distinction between these two categories is not always a matter of size.

According to the statutes of the International Maritime Organization , a watercraft is one if it cannot move higher than two meters above the water. According to this definition, ground effect vehicles , for example , but not flying boats or airliners, would be regarded as watercraft.

Watercraft were required to cross straits, rivers and lakes, but also for the spread of humans along coasts, over rivers and to reach islands , but also for fishing in inland waters and in the sea.

About 850,000 years ago, Homo erectus colonized the Indonesian island of Flores , which in the last million years could never be reached by land, and developed on the island into Homo floresiensis . The necessary crossing of the Lombok Strait is considered to be the first successful use of watercraft over a sea distance of several kilometers (by the genus Homo ).

Homo sapiens constructed ocean-going watercraft at least 45,000 years ago and successfully used them to pass through passages of around 100 kilometers away with no land view, when settling in Sahul (New Guinea and Australia) and as far as remote islands in Melanesia . The first types rafts from bamboo , Staken assumed as drive means rudder (in shallow water), wind attachment points (palm leaf mats) and along floating companion. These watercraft emerged from previously developed marine vehicles for fishing near and far from the coast.

From the 9th millennium BC onwards, rafts were used. BC also the remote islands of the Mediterranean Sea ( Crete , Malta , Cyprus ) settled.

With the invention of the ax, it was possible to build dugouts from tree trunks. From about 6000 BC. Such watercraft can be proven in Central Europe .

Watercraft made of skins sewn together over frames made of wood and bone first appeared in North America in the Stone Age . The colonization of arctic areas, where especially waters offered prey for the hunters , required high-quality boats such as the baidarka in the Aleutian Islands , kayaks and umiak in Greenland . Such boats have a frame made of wood and / or bone and are covered with skins.

Seaworthy outrigger boats and the necessary navigational skills were developed around the western Pacific over a thousand years ago .

In the course of development, dugout canoes were covered by adding boards to create shapes like the pirogue . The techniques of fastening and sealing that were developed in this way enabled the planked ships, which were predominant for traffic in the sea until the arrival of iron ships . 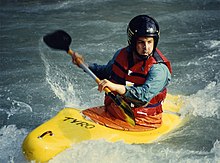