A pilot boat or pilot transfer boat is a boat that takes over the transport of the pilot to and from a sea or inland vessel for pilot routes on rivers or when approaching ports. 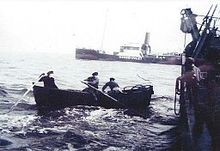 When a ship leaves a port after reaching the open waters, a pilot boat takes over the transport of the pilot back to the port or to the pilot station on the coast. It also brings the pilot to the incoming ship.

The boats are called transfer boats because pilots are also brought from one ship to another if the pilots' roster so provides. The pilots are thus transferred from a departing ship to an incoming one.

At greater distances from the coast, for example in the mouth of the Elbe , there are floating pilot stations where the pilot live for a certain period of time. These barges with a double hull made of two submerged buoyancy bodies ( SWATH ) lie calmer in the water than conventional ships when the waves are rough. If a pilot is required on an incoming ship, a pilot transfer boat brings him from the station ship to this ship. The sea pilot then guides this ship to the next pilot station in front of Brunsbüttel . There the dissolve it Elblotse from which the ship then the lower Elbe up until the pilot station Seemannshöft at the entrance of the Port of Hamburg brings. There he is again relieved by the port pilot .