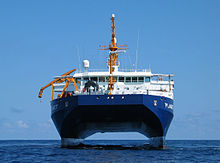 Research ship Planet . You can clearly see the narrow bridges in the area of ​​the waterline

Graphic of the SWATH principle

The Engl. Designation Small Waterplane Area Twin Hull (SWATH), in English about double hull with a small waterline area, designates a special hull shape of ships that is particularly insensitive to rough seas . It was introduced to the British Navy in 1938 by its inventor, Frederick George Creed , for which he was granted a patent in the United Kingdom in 1946 . There are two torpedo-shaped buoyancy bodies below the surface of the water, on which a platform above the water rests by means of narrow webs or supports that form a minimal waterline surface. The SWATH ship is a special form of the catamaran . Ships that are constructed according to this construction principle are called SWATH. In Japan, the term " semi-submerged catamaran " (SSC) (German: half submerged catamaran) is common. Worldwide around 60 ships, according to other sources 100 ships, were built according to the SWATH principle by 2011.

The Sea Slice , a US Navy ship built by Lockheed-Martin

The method that this hull shape uses to minimize vertical movements in swell is borrowed from semi-submersibles (design of drilling platforms). As far as possible, use is made of the fact that the wave movement, which is most violent on the water surface, decreases with increasing depth.

The desired property of this design, that swell causes the smallest possible diving movements, at the same time causes the undesirable property that diving deflections only cause very low restoring forces - the system behaves like a very soft spring. This is countered with actively controlled fins that stabilize the system while driving. 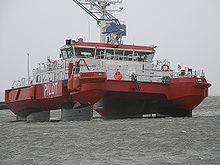 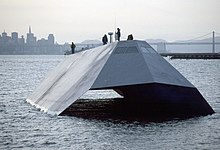 The Sea Shadow , a military SWATH

It is planned  to replace the ships of the German Federal Customs Administration - the water customs - with large SWATH-type boats in the long term.

The great advantage of the SWATH ships is that they lie very calmly in the water even in rough seas, which can prevent people on board from getting seasick . SWATH is therefore the suitable design for ships on which the crew has to continue working even in rough seas, or people have to transfer to platforms or other ships (for example pilots ). Due to the quiet location, this design is very well suited for research vessels that are dependent on small movements due to the launching and recording work of extensive measuring units and the use of motion-sensitive devices. It enables research activities even in rough seas. In rough seas, the SWATH concept enables higher speeds than the monohull concept, since such a ship does not pitch , that is, does not dive into the waves.

The advantage of smooth sailing in heavy seas is offset by the disadvantage that even small changes in the cargo lead to major changes in the draft or small changes in the center of gravity to heel the ship. If the weight changes significantly between the empty and loaded state, there is therefore the risk that the immersion bodies will partially come out of the water or that the ship will dip too deep into the water. This must be corrected by counterbalancing. The SWATH ships have a relatively large draft for their tonnage . In addition, a ship of conventional construction offers considerably more storage space .