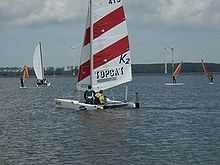 Racing boat as a catamaran 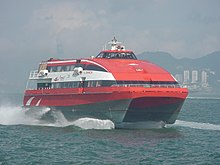 A catamaran is a boat or ship with two hulls that are firmly connected to each other (e.g. by a supporting deck). The word catamaran is a loan word from Tamil , from கட்டுமரம் kaṭṭumaram (from kaṭṭu “ribbon, bundle”, and maram “tree”, meaning “boat made from tied tree trunks”). In general, one can differentiate between motor catamarans ( motor ship ) and sailing catamarans ( sailing ship ) according to the type of propulsion . SWATH are a special form of catamarans .

In contrast to monohulls, catamarans are characterized by the fact that they are very wide and therefore lie very stable on the water. Since catamarans have no keel and are dimensionally stable , the boats have a relatively low weight. Therefore, catamarans are often very fast boats that are equipped with planing hulls (see: displacement hulls and gliders ). As a disadvantage, in addition to the difficult handling, especially in narrow harbors, the ability to capsize must be noted. In contrast to keel sailing yachts , which straighten up even after a steep incline, larger catamarans (from approx. 7 m in length) cannot be straightened up again without assistance (crane).

Catamarans were used by the Polynesians as early as 1500 BC. Chr. Used. They were two canoes with one or more sails connected by crossbars . This basic shape has been retained until modern times.

In Europe, the Romans are said to have used a catamaran to conquer Syracuse in the Second Punic War (218–202 BC) . The ship consisted of two hulls, each 31 m long and 5½ m wide, which were connected to one another by cross beams. After that, this type of shipbuilding was apparently already forgotten in antiquity .

In 1768 the Englishman Patrick Miller designed the Edinbourg trimaran with a length of 30½ m and a width of 9½ m, which had paddle wheels operated by muscle power between the ship's hulls . After another muscle-powered paddle wheel catamaran on the Firth of Forth , he operated a five knot (kn) double-hull paddle steamer on Dalswinton Lake near Dumfries in 1788 . This was 7.5 m long, 2.1 m wide and was supported by a William Symington - steam engine operated.

The American Robert Fulton built three catamarans as harbor ferries for New York between 1812 and 1814 . They were 24.4 m long and 9.15 m wide. The Jersy and York ferries were powered by a 20 hp steam engine, and the third ship, the Nessy , is said to have had 120 hp. Another catamaran from Fulton was the warship USS Fulton (also Demologos or incorrectly Demogulos ) - actually a floating battery with a steam engine - which, with its dimensions of 47.6 mx 17.1 m, was long considered the largest ship of its kind. With the paddle wheel between the hulls, which was driven by a 120 hp steam engine, it reached 5.5 knots, but was not built for ocean voyages.

Catamarans were built in the United States , Great Britain, and Russia in the 19th century . The English Channel Steam Ship Company had the Castalia catamaran built in 1874 and the Calais-Douvres for ferry traffic across the English Channel in 1877 . The Castalia was 88.4 m long, the individual hulls each 5.18 m wide, the draft was 2.13 m and the water displacement was 1290 tons. Between the hulls were two paddle wheels with a diameter of 6.1 m, which were driven by two steam engines with 600 hp each. The speed was 10½ kn.

The Calais-Douvres was slightly larger, but reached a speed of 14½ knots with her 4270 hp. Both ships could carry 1000 passengers each  . Although the ships were ready to sail, they were first to the railway company London Chatham & Dover Railway sold and entered after every ten years due to their low speeds out of circulation and resold.

The inventor of the modern catamaran is considered to be the South Sea researcher Eric de Bisschop , the grandfather of the underwater archaeologist Franck Goddio . He had discovered this type of boat with the Polynesian fishermen and took it over.

Smaller high-speed catamarans (up to around 200 seats) have been used for a long time, particularly in Norway and Australia . They can reach speeds of up to 48 kn (corresponding to over 80 km / h) and thus offer fast travel options to islands and between parts of the country. Since the end of the 20th century, such ships have been increasingly used in traffic to and from Heligoland as well as on the Lower Elbe and on Lake Constance .

On some European routes, particularly large catamaran ferries also operate as car ferries . These include:

The 91 m long large catamaran Catalonia , built by the Incat shipyard in Tasmania , briefly held the record for the fastest Atlantic crossing by large ships with an average speed of 38.65  kn (71 , 6  km / h ). The trip went from New York to Ceuta . At the same time, the Catalonia achieved the best 24-hour performance ( Etmal ) with 1015  nautical miles . Shortly thereafter, the Cat Link V broke the record for the fastest Atlantic crossing. The largest catamarans (class HSS 1500 ) are used by the shipping company Stena Line on routes in the Irish Sea , the first of which is the Stena Explorer . They are 127 m long, 40 m wide and have a displacement of almost 20,000 tons. They can transport up to 1500 passengers and 375 motor vehicles at a speed of 40 kn.

Catamarans are also often used in motorboat racing , for example all world championship series are held on catamarans with a safety cockpit .

Catamaran inflatable boats of the “ ThunderCat ” class are widespread in South Africa and New Zealand . These boats are four meter long catamarans with solid rubber runners, which are equipped with an outboard motor of up to 51 kW . The ThunderCats is suitable for motorboat racing (the ThunderCat racing series is one of the fastest growing racing boat series in South Africa, Australia, England and New Zealand) as well as for excursions, as a dinghy or for water skiing . The boat is very manoeuvrable and stable with a minimal draft.

For use on the Danube was Han Asparuh as Schwergutfrachtkatamaran built. It can be divided into two parts. The cargo catamaran of the Ignatiev brothers is on the move on the Volga and its tributaries .

Individual warships in catamaran design are also in use. These are mostly supply and combat support units. The first motor catamaran to be used in combat is the Chinese type 022 high-speed rocket craft of the Houbei class . The first copy was handed over to the Chinese Navy in 2005 . Today it is estimated that up to 40 of these boats are in use.

Solar catamarans, which are powered by solar energy, have a new and environmentally friendly form of propulsion. The currently (2010) largest solar catamaran is the Tûranor PlanetSolar . The SolarWave , a 14 m long solar catamaran, has been on a world tour since April 2010.

The luxury boat Kormaran K7 was developed in Salzburg. It can sail as a monohull, kata or trimaran and in an airplane mode.

Rowing catamarans are generally light sports equipment that is moved by rowing with straps . The crew can consist of two to eight or more people, depending on the size of the boat.

Sport Yak II from France, a small, two-shell, unsinkable feeder and dinghy made of thermoplastic, which can also be sailed or operated with an outboard motor , became popular on Austria's lakes from around 1968. Empty or only occupied by a child, only the catamaran hull-like longitudinal bulges of the lower shell plunge into the water, but from a load of 70 or 100 kg, the flat underside of the boat also plunges into the water.