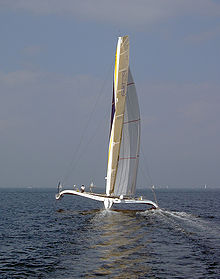 Trimaran Gitana 11 from behind: In modern regatta marans, a hull usually rises out of the water under sails 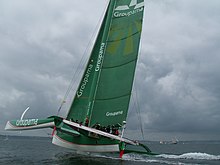 At higher sailing speeds, even the middle hull largely leaves the water ( Groupama 2 by Franck Cammas ).

A trimaran is a boat or ship with three parallel, narrow hulls, more or less spaced apart . The middle fuselage is the largest, the two sides are used for tipping stability.

Like the catamaran , which has two hulls, the trimaran is one of the multihull boats that are characterized by high speeds. Today, trimarans are usually the fastest boats of all sailing boats and, for example, hold the records for the fastest circumnavigation of the world , Atlantic crossing , etc.

The trimaran, like the catamaran , is a multihull boat . Compared to monohulls, these have two significant advantages: they are significantly faster and have a significantly lower draft .

When multihulls have capsized , they are more difficult to erect than comparable monohulls. Capsized trimarans can usually only be straightened with technical effort.

Trimarans with a cabin up to approx. 9 meters in length offer more space in the cabin than a catamaran of the same length. With lengths beyond that, catamarans offer significantly more space. Sport boat trimarans are built in series (as of Aug. 2007) up to a length of approx. 12 meters. Racing and experimental trimaran constructions come in all sizes. Monohull boats offer more space in the cabin with the same length. Trimarans offer significantly more space on the ship than monohulls on the nets that are stretched between the hulls.

In contrast to the catamaran, many trimaran constructions can fold in the outriggers. This means that the trimaran can be transported and slipped on a trailer or moored in the harbor to save space.

There are experimental designs based on trimarans with hydrofoils located in the water , which can achieve extremely high speeds through or over water for a wind-powered vehicle. By adjusting the windward wing and the aft wing negatively and adjusting the leeward wing positively, a righting moment that only depends on the speed can be generated. However, the material and the resistance of the wind set limits.

Trimarans hold (as of 2011) all important speed records of sailboats. In the field of short-distance records, the hydrofoil boot Hydroptère was the first trimaran to set the speed record over a mile in 2007 (previously: windsurfers ) and in 2009 temporarily the record over 500 meters (previously windsurfers and kitesurfers ); Only on the short distance of 500 meters did the kite surfers, who are counted among the sailors, manage to take over the “ sailing record” again (status 2010); In contrast, the trimaran has no competition among sailboats .

Also for long-haul, i. H. In the meantime, trimarans in particular are used for ocean records. The record for the fastest circumnavigation of the world went to a trimaran in 1997 ( Sport-Elec by Olivier de Kersauson ) and again from 2010 (as of 2011) ( Groupama 3 by Franck Cammas ). As early as 1973 , Alain Colas drove a trimaran ( Manureva , ex- Pen Duick IV ) to the world circumnavigation record under single-handed sailors , and since 2004 ( IDEC by Francis Joyon ) the respective best time has only been beaten by trimarans (as of 2011).

The current record (2017) is held by the French sailor François Gabart with his 30-meter-long trimaran MACIF. The 34-year-old crossed the start and finish line off Brest after just 42 days, 16 hours, 40 minutes and 35 seconds. Gabart was thus six days and almost ten hours faster than the previous record holder Thomas Coville.

Warship, view of the hull of the Independence class LCS-2

While trimarans have so far been used almost exclusively in sailing, the British Royal Navy carried out tests with the Triton experimental trimaran from 2000 to 2004 as part of the Future Surface Combatant program. The Royal Navy planned to build new frigates in the trimaran design. One of the highlights of the test series was the world's first landing of a helicopter on board a trimaran in 2001. In 2005, however, the Ministry of Defense decided to cancel the project due to cost reasons. The Triton was then used in marine research. Since 2007 she has been in service as a patrol boat for Australian Customs.

The United States Navy has been testing a trimaran for its Littoral Combat Ship with the Independence class since 2009 . The first unit in the class, USS Independence (LCS-2) , entered service in January 2010. 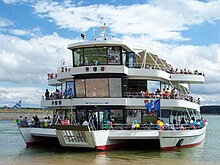 On the Great Brombachsee , according to the operator, the first passenger trimaran has been used on an inland waterway in passenger shipping for several years.

The second largest trimaran in the world after the Independence class is the 40.5 knot Benchijigua Express ferry operated by Fred shipping company . Olsen, SA The 126.7 meter long and 30 meter wide high-speed ferry operates between the Canary Islands Tenerife , La Gomera and La Palma . It offers 1,290 passengers and up to 340 cars. It was built by the Australian shipyard Austal .

Trimarans that can attach their booms to the hull are built by some manufacturers. This construction allows mooring in normal harbor boxes for monohull yachts or simplifies transport on land. At least 5 technical concepts are used:

In the science fiction film Waterworld (1995), the protagonist ( Kevin Costner ) cruises the seas in a high-tech trimaran. The film shows the interior of the ship as well as numerous sailing and mooring maneuvers .

The Cloudia is an experimental trimaran with a Flettner rotor .