Royal Navy sailors with White Ensign in the background

The Royal Navy is the Navy of the United Kingdom .

Due to its island location , the British Navy has always played a major role in the history of the country. This applies to both defense and imperialist expansion within the framework of the British Empire . In January 2007 the Royal Navy comprised 91 warships and 74 auxiliary and supply ships (a total of 165 ships), making it one of the largest navies in the world. Together with the Royal Marines , the Naval Reserve Forces and the Naval Careers Service, the Royal Navy forms the Naval Service (also Senior Service called) of the British armed forces.

The Royal Navy is one of the six navies in the world with submarines with nuclear ICBMs . 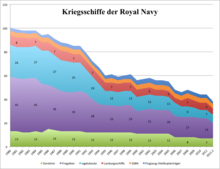 There is no founding date or any specific historical date for the start of the British Royal Navy; the origins of the Royal Navy can be found in the more or less small fleets that the British kings put together as needed in the Middle Ages to fend off external enemies. These fleets were usually quickly disbanded after the end of a conflict. It was not until the 16th century that a permanent fleet was formed during the war against Spain and its armada, which became a permanent fixture during the 17th century. In particular, the armed conflicts with France from 1690, which lasted until the Napoleonic Wars , led to the development of a large fleet that dominated the oceans.

The 19th century brought a long period of peace between Britain and its great rival France. The introduction of steam power , steel as a building material and large-caliber, long-range weapons changed the warships, as a leading industrial nation at the time , Great Britain was at the forefront of the industrial revolution and was able to maintain the paramount importance of its fleet into the 20th century. It was not until the world wars that the Royal Navy lost its leadership position in technology and combat capabilities to the US Navy .

All warships of the Royal Navy since 1789/1790 have had HMS = Her (or His) Majesty's Ship as part of their name ( ship prefix ) . The auxiliary ships form the Royal Fleet Auxiliary Service and carry the prefix RFA . In addition, there is the Royal Marine Auxiliary Service , which performs similar tasks as the RFA, but is mainly active within British territorial waters. These ships have the suffix RMAS . Some other Commonwealth states have similar prefixes for their ships, but with the states added to delimit them, such as HMCS for the Canadian Navy or HMNZS for the New Zealand Navy .

The five units of the Royal Navy

The Surface Fleet consists of the surface units of the Royal Navy. It forms most of the British Navy. In total, the Surface Fleet contains around 70 ships. These include an aircraft carrier , a helicopter carrier , two amphibious landing ships , half a dozen destroyers , around a dozen frigates, as well as minesweepers , patrol ships and research vessels. Since the end of the 1990s, the Surface Fleet has been fundamentally restructured and downsized. Many smaller units as well as the DropShips were replaced by new Albion- class ships .

At the beginning of the 2010s, another downsizing began. The three Invincible- class aircraft carriers that were retired by 2014 have been replaced by two new, larger Queen Elizabeth- class aircraft carriers that entered service in 2017 ( Queen Elizabeth ) and 2019 ( Prince of Wales ). Between 2009 and 2013 there was a generation change among destroyers , the Sheffield class ( Type-42 ) was replaced by the more modern Daring class ( Type-45 ). The Type 23 frigates will be replaced by those of the City class ( Type 26 ) from the end of the decade . The first of currently (2012) 13 planned ships equipped with a CODLAG propulsion system is to be put into service in 2021. According to the White Paper of October 2010, Strategic Defense and Security Review (SDSR) , other original plans have been postponed . 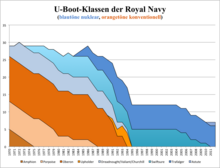 Development of the hunting submarine classes (excluding Vanguard) since 1970. The strong quantitative decline and the purely nuclear-powered fleet are evident.

A subdivision is the Submarine Rescue Service (SRS) . This is responsible for the rescue or recovery of crashed submarines and, along with the USA, is considered a world leader in this field. It is based in Glasgow and can be deployed anywhere in the world within twelve hours. The SRS was with a rescue submarine type LR5 and remote-controlled diving robots of the type Scorpio equipped. The NSRS has meanwhile replaced the previous systems. In addition, the SRS has contacts to research institutions all over the world (especially in Australia and South America), so that they can provide additional diving robots ( Remotely Operated Vehicle ), or ROV for short, in emergencies .

The Fleet Air Arm consists of the aircraft and helicopters of the Royal Navy. The number of aircraft has been greatly reduced since the mid-1990s. In 2010, the Harrier GR9 were prematurely decommissioned and 50 to 60 F-35B Lightning IIs will only be used jointly by the Royal Air Force and the Fleet Air Arm for the new aircraft carriers of the Queen Elizabeth class from the middle of the decade .

Most of the emergency aircraft currently available are helicopters, with which the Black Cats , an aerobatic team that flies two Lynx , are equipped. To compensate for the lack of carrier-based fighter jets, the defense cooperation agreements between France and Great Britain 2010 , according to which the Royal Navy could fall back on resources from the National Navy .

The Royal Marines are the British marines and are one of the oldest surviving marines in the world. They consist of around 7,000 soldiers. Your task is in particular to prepare and carry out landing operations. Landing craft and helicopters are available to the Royal Marines for this purpose. In addition, they are among the few units in the world that have landing hovercrafts. The USA built the United States Marine Corps based on their model , with which the Royal Marines are closely associated to this day.

The Royal Marines also include the Special Boat Service (SBS) . The SBS was founded during the Second World War together with the Army Special Air Service . The main tasks are operating behind enemy lines, preparing landing operations and sabotage. The SBS is also used in the fight against terrorism . Due to its secret activities, the existence of the SBS was denied by the British Ministry of Defense until the 1990s . To date, no official information about SBS operations and soldiers has been made.

A special department of the Royal Marines, the Fleet Protection Group Royal Marines, is responsible for the protection of naval ships and the guarding of British nuclear weapons .

In the United Kingdom, the Royal Navy has four major naval bases:

In addition, it still maintains or uses some bases overseas:

The Royal Navy also uses other Royal Air Force bases as part of the Joint Helicopter Command , also outside the British Isles .

Standing Naval Forces (SNSF) are small fleet associations that continuously perform monitoring and control tasks in a limited area. Great Britain uses these both to protect its overseas territories and on behalf of NATO and the UN . Typically, a single British Standing Naval Force comprises 2 to 5 ships, including frigates, destroyers, patrol boats and supply ships. In some cases, there are also submarines and aircraft or helicopter carriers. The ships and crews normally change every six months, but occasionally the missions can be extended to twelve months. In January 2005 there were Standing Naval Forces in the North and South Atlantic , the Caribbean , the Mediterranean , the Persian Gulf , the Indian Ocean and the Falkland Islands . The formerly largest SNSF in terms of numbers, the so-called Ocean Wave '97 in the Pacific , was reduced to a minimum when Hong Kong was returned to the People's Republic of China in 1997 . It comprised up to 20 ships, which were mainly used between China, Korea and Indonesia . Today only one or two ships, including always a frigate or corvette, are regularly stationed in the region.